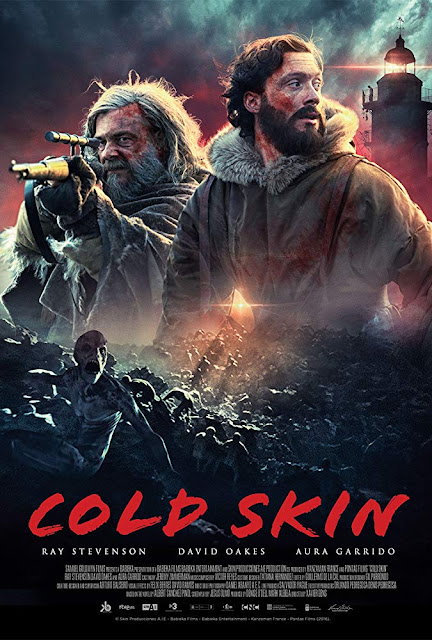 I have been getting a whole bunch of films sent for review lately which actually turn out to be pretty darn good. When I sat down to watch Cold Skin (directed by Xavier Gens - Hitman, and with a screenplay co-written by Jesus Olmo - 28 Weeks Later) I admit to not really expecting much. I was surprised then to find a film that not only told a fresh feeling story, but also one which was a quality product from start to finish, even if at times it takes itself perhaps a little too seriously.

In 1914, just before World War I breaks out an unnamed man (David Oakes) arrives at a remote antarctic island to take on the year long position of weather observer. The only other inhabitant is a grizzly man calling himself Gruner (Ray Stevenson - Outpost, The Book of Eli) who looks after the strangely fortified lighthouse there. On his first night on the island he finds his cabin assaulted by monstrous creatures that seem to have came up from the sea. Eventually he forms an uneasy alliance with the hostile Gruner who explains that the creatures attack en masse most nights, together they fight them off day after day, but slowly as the duo's methods get more and more brutal the man begins to question just who the real monsters are. 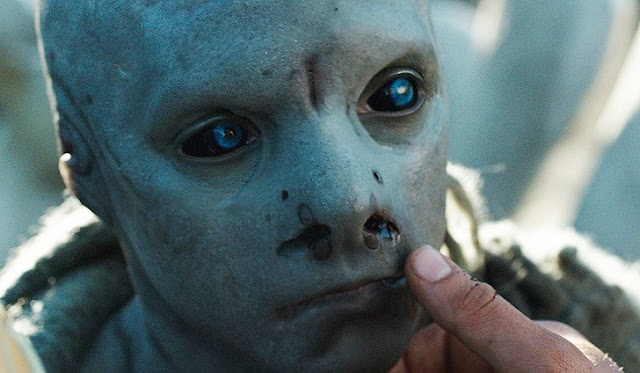 I really quite enjoyed Cold Skin due to a wonderful sense of place it has. The film is mostly held together by the three main actors who all do sterling jobs. The man is more an instrument at first for the viewer to see the unfolding horror from a fresh perspective. He is a bit of a blank slate in that his motivations for taking the isolated job are never explained and his past is never explored. As the film progresses he becomes the Ying to Gruner's Yang, starting to question if the pointless violence and bloodshed is all worth it. By the movies end I liked what they did with his character, it opened up interesting suggestions of the real fates of other characters. Gruner on the other hand is a far more bitter and dark person. It is never revealed exactly why the island is attacked night after night and so there comes a timeless quality to the regular fighting, like it is something that has occured for eternity. It was interesting how these two characters were polar opposites in lots of ways but are brought together by a common goal. The third character is that of Aneris (Aura Garrido) who is a non hostile monster that is almost like a pet to Gruner. For a role that has no dialogue at all Garrido puts a lot of emotion and feeling into her performance, more impressive when she is in heavy make-up for her role. Her plight is almost like a twisted mirror version of The Shape of Water, thankfully while this does have a fantastical element to it this is a much better film than that odd one.

There are many action scenes here with some great night time battles that have hundreds of the sea creatures attacking the lighthouse, climbing up its walls as the man and Gruner fight them off with a series of hand held weapons and guns. These sequences never failed to be exciting to watch, and also really well done. The creatures may be weak but the sheer numbers make every battle seem desperate. The shots of the lighthouse with creatures climbing up all around are forever exciting, and they are wonderfully paced with the right level of build up and suspense. The creature designs impressed also, I figure a lot of them are CGI but they never look fake, or imposed on the scenes, instead they seem like a real physical presence in the world. The cinematography here is nothing short of stunning at times, while the music, and the make-up effects never falter. As I mentioned in my introduction to the review though Cold Skin does take itself a little too seriously for its own good at times. This is after all a film about fish monsters and so I felt even a single moment of comic relief would have benefitted this as by the end it was too po-faced, the characters too earnest and serious. The works of H.P Lovecraft are an obvious inspiration but in terms of horror this never comes anywhere even close to that master of terror. 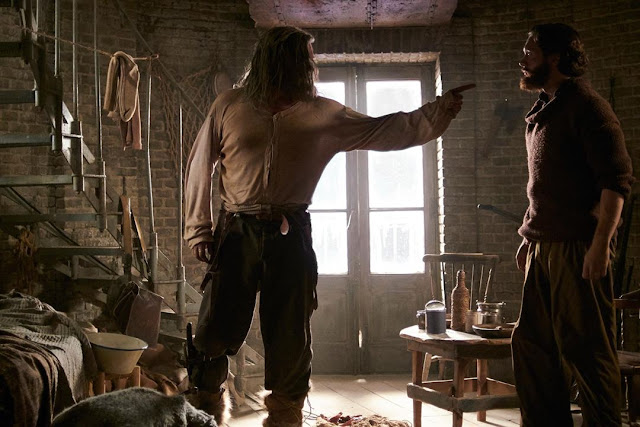 The setting and style of this did feel fresh, but that isn't to say it was completely with its own ideas. I felt that the setting of 1914 made this as a partial analogy for the futility of war, as these characters battle these monsters I did think to myself that halfway across the world (within the film) World War I was going on that itself was a series of ultimately pointless violence inflicted on both sides. With that analogy though I never really felt much for the fish creatures as aside from a couple they all come across as faceless beings that didn't seem to have that much humanity to them, though it also works as a comment on colonisation. This also felt a little bit like Joseph Conrad's Heart of Darkness, there are many similarities between the man and the lead of that story (both are narrating a past event), while Gruner's descent into savagery and barbarity often eclipses that of the supposedly savage monsters that in his own twisted way he rules over. My favourite comparison (that I made in my notes when watching this) is that the main duo are like a horror version of the two from the cult classic Withnail & I!

While Cold Skin can be accused of being too serious it is nonetheless a fascinating film to watch. It feels like a fantasy for sure, but one that has atmosphere, and that feels like a slice out of time. The isolated setting helps to get the viewer immersed in the goings on, while the directing and cinematography make this into something that is never dull to watch. Cold Skin comes to North American Digital platforms and select theatres on September 7th thanks to Samuel Goldwyn Films.