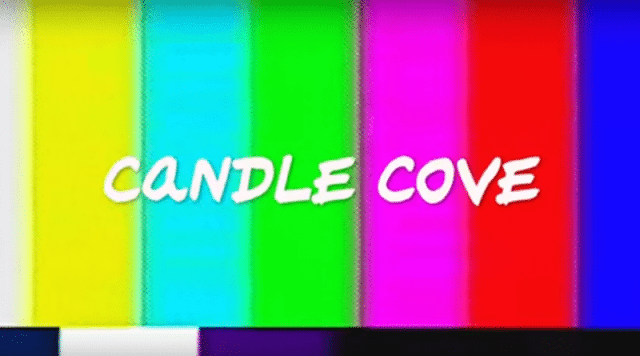 Candle Cove is director Andrew J.D Robinson's latest short horror film (previous ones of his include Placebo, A Walk Home Alone, and Sightings). This is a loose adaptation of a Creepypasta story (which are horror-related legends and images that appear around the internet). Even before discovering that fact I had thought to myself it felt like one of those so it shows the sensibilities of the source material was covered well.

A brother and sister (Tristan McIntosh and Anne-Carolyne Binette) are sorting through a cupboard when they come across some old VHS tapes of a childhood silent puppet show called Candle Cove that they used to sneak downstairs late at night to watch as kids. After the brother questions what happened to it the sister remembers that he never saw the very last episode as he fell asleep, she recounts that it was very odd as was just full of screaming. The two decide to check out the tapes with the sister deciding to put on that strange last episode...

This short is just two minutes long, and so it is impressive how effective parts of it are. It starts (and ends) creepily enough with vintage looking footage of some old puppets. The discovery of the tapes, and the build up of anticipation for the payoff was an addictive watch, I must have seen this short at least ten times by the time I got around to writing this review. Personally for me though the reveal just wasn't that exciting, it failed to resonate with me, and truthfully I don't quite get it. This is no fault of Robinson as it is an adaptation of an existing story that had a similar twist to it, for me it was a shame as otherwise this is an excellent short that has some great attention to detail, the end credits in particular were fantastic.

The editing for Candle Cove was great, as was the choice of music, as well as the unsettling sound effects used towards the end. Sometimes the journey is more important than the destination, as is the case here. The quality of Robinson's shorts forever seems to improve. See what you think for yourself, I shall include it below.