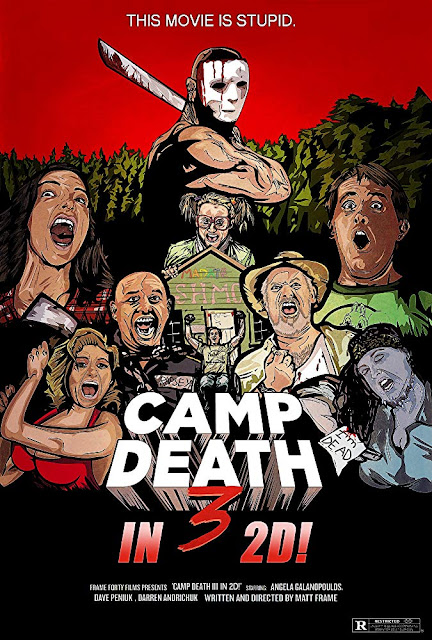 As the title might just suggest director Matt Frame's Camp Death III in 2D! is a comedy horror, one that is most directly a parody of the Friday 13th franchise, though this also features parodies of other films along the way. The humour in this was very strange and weird, yet also consistent and so while at times it got a bit exhausting it was ever inventive.

Camp Crystal Meph was the scene of a series of brutal murders years in the past thanks to a psychotic killer known as Johann Van Damme (Terry Mullett), due to this the camp was shut down. Now Todd Boogjumper (Dave Peniuk) has decided to re-open the place as a rehab centre for mentally ill adults, much to the disgust of his perpetually angry uncle Mel (Darren Andrichuk - 3 Hours Till Dead). However it seems that Johann (who disappeared years previously) is not happy that people have returned to the camp and soon the body count begins to rise... 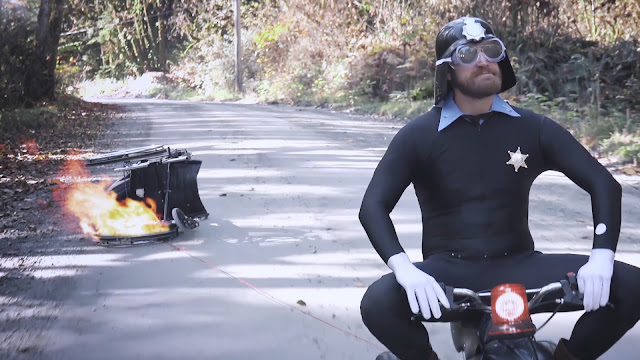 This movie is quite crazy with every single character completely over the top in the way they act, they use facial expressions manically so everyone looks insane in the jittery way they move around. It felt like this was a comic strip brought to life. Usually in horror comedies you get people playing straight roles and so this bizarre, yet consistent style took a while to get used to. Due to every single character being this way it soon was something I got used to and did lead to some good moments. Characters are all quite forgettable with many being straight up stereotypes such as the Irish man obsessed with potatoes and the shy Asian girl. The film pokes fun at a variety of subjects from these caricatures of different people. Yet it is all so over the top that it couldn't ever be something I found offensive. it shys away from being racist and homophobic at least. But then if you're watching this by choice then this low brow comedy can't possibly offend.

There are a whole bunch of characters here, many of them totally forgettable, the highlights though were thankfully ones who got more screen time than the blander ones. My personal favourite character was Mel, I loved how absolutely furious he was throughout, and his side story of being in an eternal battle with squirrels (that appear as puppets) was pretty amusing. I also found Todd to be a good character, mainly due to Peniuk who really gave this zany performance his all and so was hypnotic to watch throughout. The killer had a lot less to him, but mainly due to him being far more sedate than the others, he did have some good scenes though. 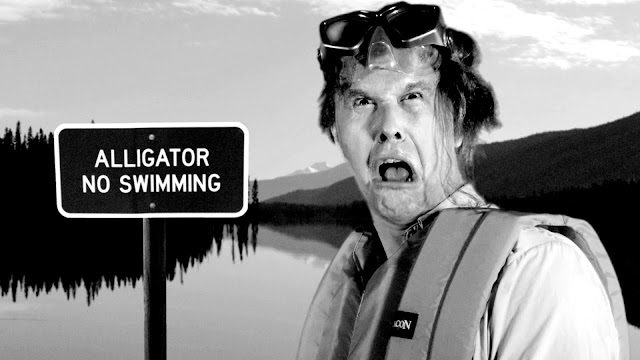 For me the highlights in terms of what was actually happening were the many death scenes of characters being murdered in a variety of ways, some which worked, and some which didn't as much. Being a comedy there are some ridiculous deaths here, such as murder by a toaster, and a character who inadvertently kills himself while trying to show the killer the best way to murder someone. Many of the characters end up dying by means other than the killer though, a few too many I felt in the end. Some of these scenes also felt a bit tangential to the overall film, a protracted part that is a parody of the woodland flying bike (I don't know the proper name of them!) scene from Return of the Jedi felt quite random even for Camp Death and was also a bit obvious with what was going to happen. In general though the many murders and accidental kills were fun to watch and full of plenty of blood and gore CGI and otherwise.

The special effects had a big reliance on average looking CGI but this look did fit the tone of this film and so worked. Blood splatters all looked identical while explosions and motion effects ended up really bizarre looking, whether purposefully or not they fitted the madness that this movie was. By the final scene I had to admit there really were some nice ideas to be found here, not very predictable at times. Camp Death's start has to be mentioned as it was fantastic, a black and white sequence detailing a past event was followed by a manic scroll around newspaper headlines that both added in back story to the film while also serving as a credits role. There are a few flashback scenes throughout the feature and were all entertaining, especially with the bits that most parody Friday 13th itself. 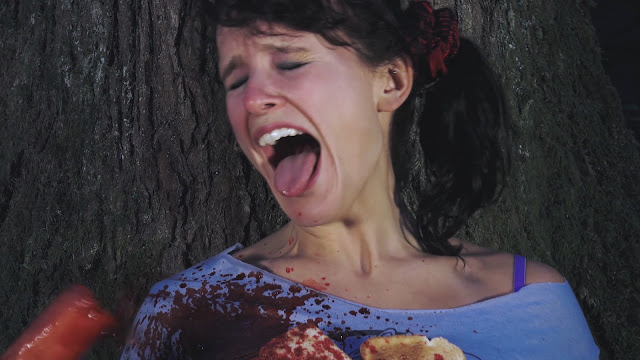 The humour was never really on my wavelength but this had its moment at times, I had expected a lot of jokes about sex and bodily functions but actually they were quite restrained for the most part when it came to these. There are several moments that seem like they are going to lead into sex scenes but thankfully they never get that far. Moments that stuck in my mind in terms of the comedy mainly revolved around the more horror aspects such as a woman very slowly running down a road as a van very slowly chases her, a concept of feedback being used as a weapon, and a crazed cocaine snorting squirrel! There are moments that are ripped straight out of Friday 13th such as the original killer being the mother of the current killer and a nice role reversal of the ending of that original horror.

Camp Death III in 2D! can be a tiring film to watch and it does occasionally stumble due to disjointed scenes that seem out of place, such as a couple of terrible musical numbers. While the humour wasn't always for me it really was amusing in places, this continued to throw out the occasional surprise with moments that were unexpected and did delight in a trippy way.