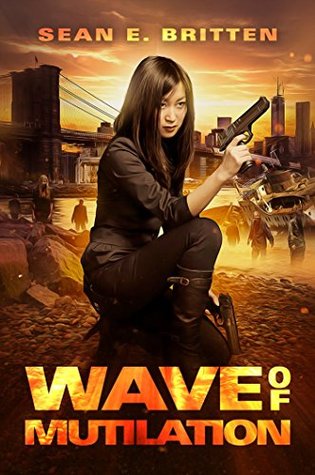 In May earlier this year I reviewed Sean E. Britten's Screamers which was a zombie novel with a difference and was also pretty great. After the review I realised I actually owned an earlier book of Britten's that to my shame I had not yet got around to reading. Staying true to form in reading slow I have finally finished this earlier book; another zombie novel, but this one a far more traditional read that swaps the remote Australian riverside for more well travelled America.

This time around we get to read about undead apocalypse from the very start. Cyndi Hong gets herself caught up in absolute mayhem while on route to work in New York. By a series of perilous adventures she first meets up with some gangsters, where she befriends Jules, and a lady named Jen, before then meeting up with a small boat of fellow survivors. Together they set out to find a safe place to try and survive zombie Hell.

So Wave of Mutilation is a far different beast than Screamers, and a far more predictable affair, though that is not to take slight against the quality of the writing here. It is only the individual components which are familiar, but the way these wild situations link up make for a real rollercoaster of a story with Cyndi thrust into insanity after insanity. The initial outbreak in New York was exciting with the undead waves described in great detail, like much of the book this part is quite vivid and cinematic, helicopter rides, shootouts, sieges and explosions punctuate Cyndi's journey to hoped for safety. Now gangsters are not something I find that interesting when it comes to zombie stuff (with the exception of the great Gangsters, Guns, and Zombies). I think this is due to Ian McCellan's novel One Undead Step from 2014 which gave me my fill of gangster related undead shenanigans. It is lucky then that due to the fast paced world of Wave of Mutilation this whole side bit is left behind at around the halfway point of the novel, something that I was quite surprised to see.

There are plenty of characters throughout though it is Cyndi who is the only constant. She's a likeable lead, someone who discovers a natural ability with handguns, and who has courage in spades. With the other characters it was good to see that no one seemed safe from sudden and swift death. There were people who I thought were dead set to be core characters that would last to the end only for them to be unexpectedly wiped out, this is of course a good thing. Not many characters get real plot development to them, and some are obvious odes to other characters in other media. Arriving at an army base ruled by a soldier named Rhodes it was very obvious where things were going to go, as this character pretty much acts the same as the infamous Rhodes from George Romero's great Day of the Dead. There are nods to other zombie media everywhere, from some characters discussing who would win in a fight between a zombie and a shark (that occurs in the film Zombi 2), to coming across the S-Mart that is of course a reference to the Evil Dead series. It makes for a fun read but at times it did feel like there were not a whole host of original ideas here, though tackling such topics as racism and sexism felt strangely relevant in today's world.

Britten nearly reaches the dizzy heights of David Moody (the Autumn series of books) when describing crowd scenes, you get a real idea in your mind of what the characters are looking at. Also his zombie virus can infect animals as well which leads to some set pieces with zombie dogs, and even a zombie tiger. Zombified animals are always a nice touch and help inject some new situations into a typical story. I appreciated that children are not spared, all too often in zombie novels they are avoided, but here we get children and babies both appearing as undead. There are no end of descriptive violence to the zombies from all manner of tools and weapons, from shotguns to samurai swords and meat tenderizers these tools of destruction have a visceral sound to the damage they cause to the walking dead.

While Wave of Mutilation may not be the most original feeling story out there, the zombie genre is one where such things really do not matter. This a well written thrill ride of a story, while at times the destination may be very clear it is still fun to see how our characters reach their finish, it is hard to be too down on such a fun journey.