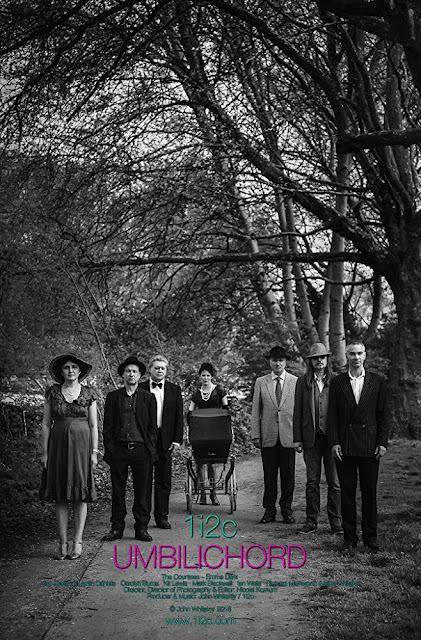 I have a glorious week off work and so it is a good time to catch up with some outstanding blog posts despite both my wrists being in some sort of demonic pain for reasons unknown. Back near the start of July I received two short horror films in an email which appear to be companion pieces seeing as how they were both taken off of a new album. The two shorts; Umbilichord and Undertaker are different to the norm as they play out like a cool mix of both short film and music video. This is fitting seeing as they were made by composer/producer John Whitaker (1i2c) and cinematographer/director Nicolai Kornum.

Umbilichord is dialogue free with just the music and visuals keeping things moving along. A countess (Emma Dark - Seize the Night, Frankula) pushes a Gothic looking pram around a park, people she passes by soon discover her pram contains within it a terrifying secret. This black and white footage is inter-cut by frequent colour visits to some sort of lab where a mad professor mixes chemicals.

The near six minute short was actually pretty decent, there is a fun payoff that I can say with certainty I was not expecting. The music was mixed well with the visuals that complimented each other in a cohesive way. Elsewhere I had no problem with any of the actors, they both looked and acted the part that was called for. I was unsure if there would be much plot to speak of so was nice that the horror aspect was evident. Umbilichord is taken from the new album by 1i2c "It Should Be You" that can be purchased here.

Posted by Daniel Simmonds at 04:51