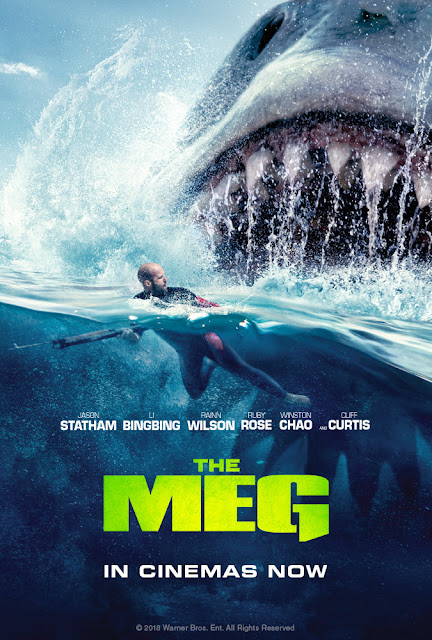 Would I class The Meg as a horror? Yeah, I reckon so, after all Jaws which was one of the inspirations for this certainly is. I went into this not even having seen a trailer, so apart from the subject matter I didn't really know what to expect. I had heard this was so bad its good, and at times this does deserve that moniker. However the worst thing about this sea based creature feature is the truly terrible script, not really so much the plot or effects.

While on a deep sea expedition a team of researchers stumble across something big that attacks their submersible, stranding them on the ocean floor as a result.  Jonas Taylor (Jason Statham - Crank) is a disgraced ex-rescue diver that is called in to help, but the rescue while successful has the unintended effect of freeing a previously believed extinct species of shark known as a megalodon from its natural prison. Now the researchers, that include among them Suyin (Li Bingbing - Resident Evil: Retribution), Mac (Cliff Curtis - Fear the Walking Dead), Morris (Rainn Wilson - Cooties), and Jaxx (Ruby Rose - Resident Evil: The Final Chapter) along with Jonas must find a way to stop the murderous 20 metre long killer monster before it makes its way to a more populated area.

I won't lie, I really didn't think too much of this for the first two thirds of the run time, and that was predominantly due to the cheesy, wooden cliche filled script and the lack lustre performances. It's not often I really do believe that given time I could have come up with a better script myself. The lines are all so predictable that I thought on occasion it must be tongue in cheek. Maybe the joke is on me but I got the feeling this was just dumbed down to stupidity, my eyes rolled back so hard at times that I was left looking at my brain rather than the screen.

So the big feature of course is the megalodon and it does look pretty cool. It is slowly introduced with it initially being barely glimpsed, or off camera. It's a huge monster and so appears intimidating enough but it just never really caused me much excitement. I think this is due to having seen Jurassic World: Fallen Kingdom which featured a similar looking creature but in a much reduced role. There are plenty of deaths but due to the size of the thing most victims are swallowed up whole and bloodlessly meaning there isn't much fun pay-off. Around two thirds of The Meg take place underwater, these sections are never as exciting as surfaced based situations due to everything being murky and similar looking. Since I was a child I have never really enjoyed underwater sections in any film. The Meg seemed to take a unique approach to pacing. Rather than being a contained survival movie in which it is a constant fight for survival like I expected, there are instead lots of moments of down time where the cast are totally safe. There are a series of mini adventures that gave a weird stop-start and slightly disjointed feeling, it was like the momentum kept getting abruptly halted which led me to think on more than one occasion the film was at its end, only for another new segment to open up. This series of mini adventures are fun enough even if there is an excessive amount of characters accidentally fallen overboard repeatedly. The finale manages to redeem the movie for me, an exciting Jaws on speed type scene as the megalodon attacks a crowded beach. Favourite shot of the movie being a poor guy in a Zorb ball desperately trying to roll away from the monster towards the camera; that got a chuckle out of me. The acting was ok, it was hard to tell due to the bad script, no one stood out at all with much of the cast phoning in bland performances, Statham for instance did his usual hard man act.

The Meg was a film that was merely ok. It has some nice set pieces and looks pretty enough, for me it was let down by lifeless performances and a generic script. Deep Blue Sea still remains my favourite shark based horror.

Posted by Daniel Simmonds at 06:06