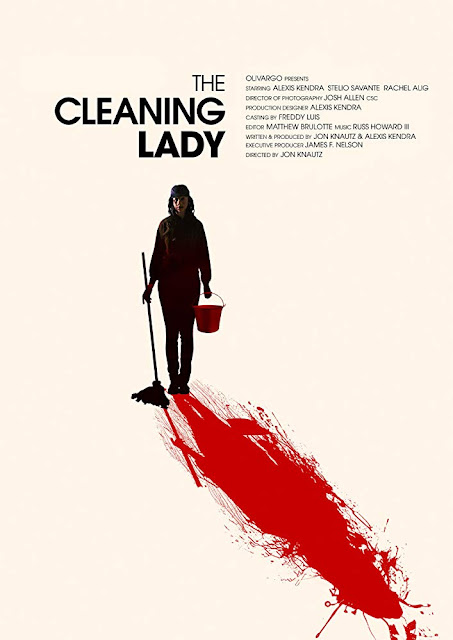 I always love when I receive a film for review and it turns out to be a good one. Thankfully that is the case for director Jon Knautz's (Still Life, Jack Brooks: Monster Slayer) The Cleaning Lady that manages to tell a familiar story but with a female twist to it, making something that feels at once mature and impactful.

Alexis Kendra (Hatchet II, Infected, and who also co-wrote this film with Knautz) stars as Alice, a 'love addict' who is currently trying her best to end a relationship she's been having with married man Michael (Death House, Uncharted 4: A Thief's End). She has also taken a recent step of hiring a cleaning lady called Shelly (Rachel Alig - Ghostline). Shelly is a shy meek woman who has severe burns over much of her face, Alice feeling sorry for her begins an odd sort of friendship with the lady. This may turn out to be quite the mistake though as the cleaner has quite a severe moral code and isn't afraid to use it on those she judges needs her assistance...

From the very start when someone puts rats in a blender I could tell that The Cleaning Lady was going to be a good film. It has a dark vibe to it but one that feels very natural and unforced in the way it rolls out. With Alice you have a flawed protagonist, someone who knows that what she is doing is wrong but who is unable to take the proper steps to fix the bad situation she is in. Perversely with Shelly you have an antagonist who is unaware that what they are doing is wrong, the character seems to sincerely believe they are helping out even when the methods are brutal. While there are quite a few side characters it is the relationship between this odd couple which is really the meat of the film. Both are great in the roles they have, in particular Alig who manages to come across at once both pitiful, but also intimidating. The character doesn't speak much and has a habit of just appearing out of nowhere making the first two thirds or so have an air of creepiness to them. She felt at times like a female Norman Bates, a silent voyeur to the goings on of Alice, though one who wants to be her, rather than have feelings for her. This culminates in a scene where she secretly makes a latex mask of Alice so she can literally be this woman.

This is one of those types of films that doesn't really seem to need much effort to tell its story, it moves along at a constant pace with the different acts expertly marked. By the end when the horror aspect has come to the front it feels like a natural progression. I liked how these early signs that something is wrong with Shelly are thrust into the viewers face, yet still have an air of mystery about them. Such as when back at her dilapidated house she walks out to a shipping container that contains an awful secret. This escalation means that the viewer is far more aware than the protagonist of the danger they are most likely in, clues appear that suggest the way the plot is going to go (such as a scene featuring a cigarette packet). There are a few flashback sequences also centred around just how Shelly got her facial burns. Usually I don't like things over explained, but these scenes are some of the darkest in the movie due to what they suggest, and feature an intense twisted performance by JoAnne McGrath who plays her mother.

Special effects are used sparingly but are effective, the burns themself look solid enough, but the other effects add a gruesome nature to some of the more darker scenes, such as a shovel attack, and acid burns. The set design stood out at times, the whole final third took place in an atmospheric looking location that was in stark contrast to the posh apartment Alice lives in. Everything combined here to make an end product that just works fantastically. This is based off a short of the same name made a few years previous and so it seems both Knautz and Kendra were really able to develop their ideas.

The Cleaning Lady is a smart solid horror that is blessed with some great casting choices for the main roles. While it has echoes of everything from Psycho to The Cable Guy it stands out on its own due to the commitment to really telling a concise tale, one which isn't afraid to provide an ending that isn't as predictable as most out there. The Cleaning Lady had its world premiere at FrightFest 2018 on August 24th.