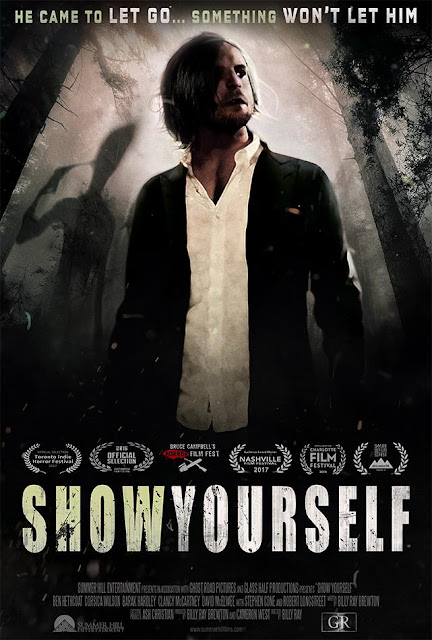 I'm always happy to accept any horror film for review here on my blog, but director and writer Billy Ray Brewton's Show Yourself stood out as the synopsis for it sounded damn captivating. This is a film featuring just the one main character, usually that is a real hard concept to get on board with as it takes a special type of actor to carry a film on their lonesome. However here there is an interesting technological concept that helps not have this get bogged down in solitude and silence.

Travis (Ben Hethcoat - The Walk of the Zombies) has travelled out to remote woodland in order to scatter the ashes of his good friend Paul (Clancy McCartney) who died unexpectedly a few weeks back. He is quite grief stricken still and has only travelled there due to it being a request of Paul's parents. Travis plans to spend a few days in the woods, both so he can work through his loss, and also so that he can prepare for a film role he has accepted. However he comes to believe that someone, or something is haunting him and soon comes to fear for his very sanity... 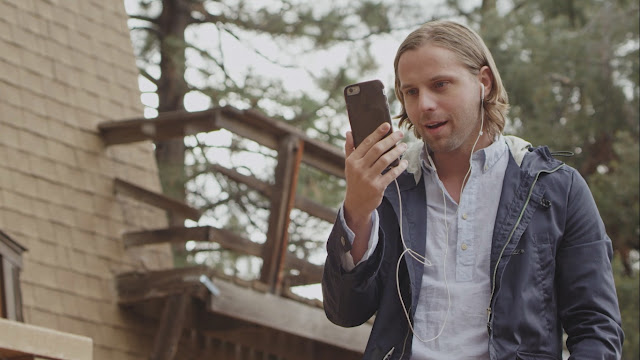 Show Yourself gets around the fact of just having the one character thanks to constantly using Skype on his laptop and on his phone. It's lucky that he is able to get a signal in such a remote location as a good chunk of the movie sees him talking through his experiences and his problems via the technology. This movie felt like an amalgamation of Unfriended, Silent Hill, and a little bit of The Battery, a unique blend that really did work wonders. The first due to the use of Skype that like Unfriended helps disparate characters talk without the comfort of physically being near each other, some of the assumed horror also takes place via this application. The Silent Hill aspect comes from the crazy time Travis is happening, in that video game series the protagonists are haunted by the manifestations of their subconscious guilt, with Travis we certainly have someone who is harbouring guilt. Finally it was both the woodland setting, as well as Travis's reliance on music to conquer his fears that brought The Battery to mind. Like that gem, here the soundtrack is perfect, mellow songs and tunes that give a rustic outdoorsy, almost hipster like feel that helps ground the horror. 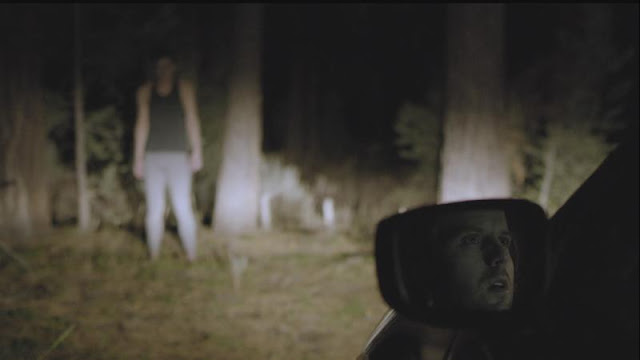 What I enjoyed about the plot is how unexplained a lot of the goings on are, it is never a hundred percent clear if what the main character experiences is actually just in his troubled mind, or if it is some real terror. Regardless if it is a spirit or if it is in his mind this is a movie both about regret, and about guilt of past actions. I appreciated how the back story is mostly played out via short video clips Travis keeps on his laptop, it means the story is drip fed to the viewer with the videos Travis chooses to watch very different to the more darker ones that appear to play on their own, and which give you the pause to consider just how close his relationship to his friend Paul actually really was. On his own and with how the normal scenes are filmed you get the sense of an unreliable narrative, the invasion of the bizarre seems to balance out what the real truth is. I was happy that there wasn't any down time, no long periods of soul searching, and on the flip side during the moments of horror the allure of quickly edited and confusing progression was avoided. I would say this is around 66% normal goings on and 33% spooky stuff, this makes the scenes of horror to be all the more effective with how brief they are they still manage to make a strong impact.

Hethcoat is a great pick for main lead, he never becomes boring, and at the same time he has some depth to him, he is a flawed lead and Show Yourself doesn't shy away from that, whether exploring his current rocky relationship with girlfriend Nikki or his video clip collection he does have demons. This goes the other way too, especially with his Skype calls to close friends Lane and Adam. This film is held together both by this script, by the insular directing capabilities of Brewton, and the great soundtrack. 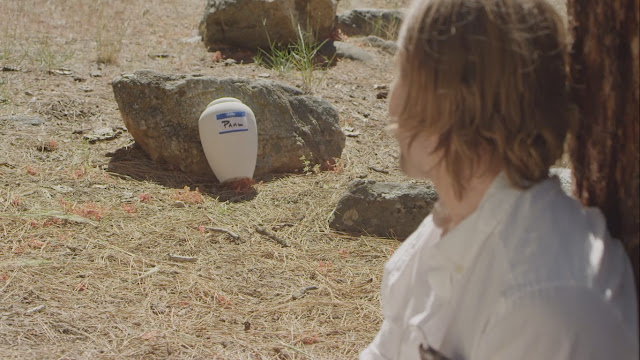 This may not be the scariest film out there, but as a vehicle for exploring a characters grief at the death of a loved one, and as a message for how to conquer that grief this works well, maintaining a steady flow that meant my attention was kept throughout. Show Yourself comes to DVD and VOD on August 14th thanks to Summer Hill Entertainment, check out the trailer below.