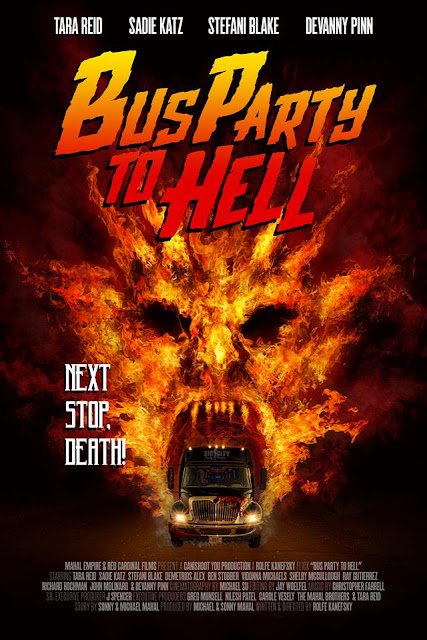 Bus Party to Hell (formally known as Party Bus to Hell) is a schlocky almost grindhouse splatfest that doesn't do too much to take itself seriously. While it features a bunch of one dimensional characters, plenty of bare chested females, and over the top ridiculous violence it is held together by some disparate ideas that keep things from ever feeling dull for too long; always something new just around the corner.

Lara (Stefani Blake) happens to come across a bus one day that is heading to the Burning Man festival. Told the trip will be free she decides she may as well tag along on the party bus that is full of young partying adults looking to have a boozy and sex filled time at the event. Their driver takes the bus off the main road out into the desert telling the group she plans to make up for lost time, but instead making an excuse she leaves the vehicle and vanishes, moments before everyone gets attacked by crazy demon worshipping cannibal cultists. The survivors barricade themselves inside the bus, but apparently one of the group is 'the chosen one' and the cultists are determined to get to this person... 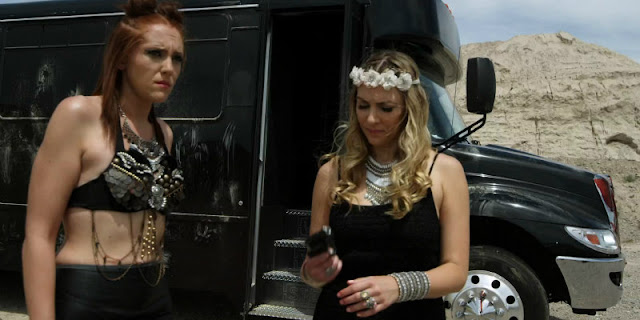 A variety of ideas is the best thing that Bus Party to Hell has even if at times these become nonsensical. The whole prologue features a woman who has escaped from some sort of nightmare (played by Tara Reid - the Sharknado series) in which people's biggest fears manifest themselves in reality. This whole section was a load of fun but is false in that it doesn't relate to the rest of the film, aside from her character meeting with the bus her story is totally separate and so felt a bit disjointed no matter how very cool it was. The meat of the film is the bus siege that features some fun scenes of mayhem and violence. The cultists slicing off heads and limbs, eating entrails and bathing in victims blood. Aside from the initial meeting of these two groups though they mostly stay separated with the bus impervious to their attacks (aside from a neat kill or two). The focus of the horror morphs later on with the final third being almost a different type of horror entirely, again, the best part about Bus Party to Hell is its inventiveness, this is shown in the creature design, as well as one sequence in which the tattoos of a woman become real and attack the ever dwindling survivors.

It is hard to really care about the characters but then I don't think you ever are meant to. They include a guy who thinks he's amazing, his best friend, a bad boyfriend and his long suffering girlfriend, a nerdy introvert and a lesbian. These characters are all stupid and full of bad ideas while still finding time to talk about sex a lot even in the most dire circumstances. This ties into a key scene that edits between a girl losing her virginity and some of the others rooting through the insides of a dead body looking for an essential item they think is inside it. It was by this point things did start to get a little bit boring but then it all changes and my attention was back. The cultists looked like a bunch of metalheads and there were several montages of them just hanging out together acting evil, but without seeming like a viable threat. For all the blood and violence there wasn't anything here that was actually scary, instead this is over the top carnage designed to appeal to the lowest common denominator, all fine if that is what you are after for it is something easy to watch that you can just switch your brain off to. 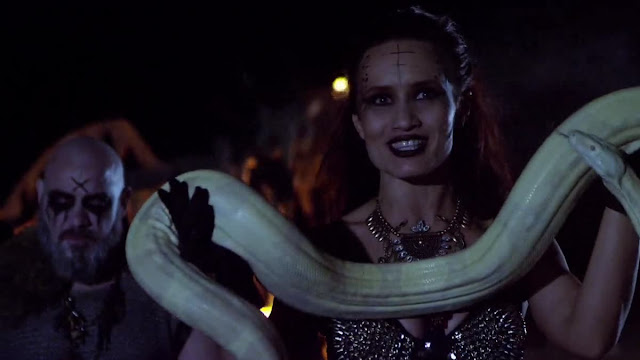 Bus Party to Hell has a lot going for it in terms of the varied ideas it has, the old ultra violence was nice to watch, being gory without ever feeling realistic enough to actually offend. There were a bit too many half naked females for my liking, it seemed designed purely to attract attention, though it does fit in with the grindhouse feel. Not a bad way to lose an hour or so there is plenty of fun to be had with this if your in the right mood. Bus Party to Hell is out on VOD/DVD/Blu-ray in North America.