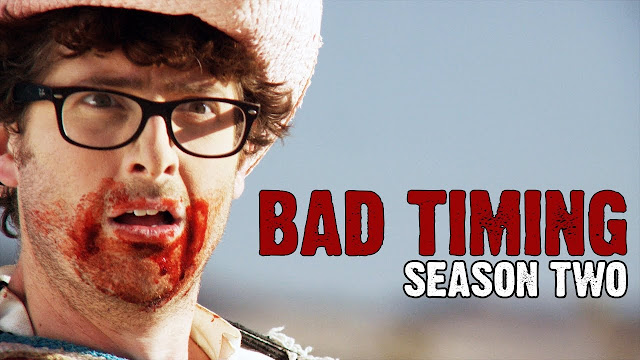 Around a month ago I watched and reviewed the first season of web based zombie romantic comedy Bad Timing. Now that title was apt for many reasons, one being that I saw it just as my personal life got quite dark, and so it has taken me until now to get around to watching season 2. While I felt the 'third wheel' angle was getting a little bit stale by seasons end I was still interested to see where things would head next. Slight spoilers for season 1 to follow.

Bad Timing takes place shortly after zombie apocalypse has swept America. In season 1 awkward I.T guy Andy (Andy Goldenberg) ends up taking refuge in a remote desert house with the love of his life Eve (Aqueela Zoll), this idyllic set-up is ruined when Eve's perfect boyfriend Kevin ( Michael Wayne Foster) turns up. The season ended with the shock arrival of Andy's Mom Phyllis (Lisa Raggio - Monsters, Inc.) who Andy shoots after mistaking her for one of the undead, while Eve and Kevin flee the house. The second season picks up immediately afterwards and changes the group dynamic a lot. Fussy Phyllis brings with her Sam (Becca Leigh Gellman) 'a nice Jewish girl' who Andy's Mom plans to set up with her son. However still obsessed with Eve he sets out to try and catch up with her and Kevin. Unknown to him however while he is on a journey to find them they have themselves returned to the desert house, and finding it empty assume Andy is no longer among the living. 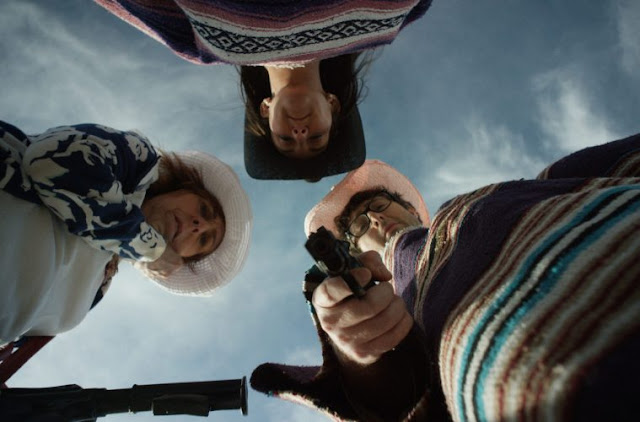 This season is longer coming in at 19 episodes with a combined total of around seventy minutes (again each episode is just a few minutes long). While this never felt as funny as before it had the benefit of meaning there wasn't as many jokes that fell flat either. I don't recall laughing out loud even once, yet still found this whole arc entertaining. I liked how the rom-com aspect changed tracks from Eve and Andy to Andy and Sam. Obsessed with Eve Sam helps him as best she can and soon subtly he unconsciously begins to get feelings for her. It would have been easy just to choose a bland or unattractive girl for the role of Sam but she is not only a nice and patient character but she too is quite easy on the eye.

The addition of more characters really helps keep things interesting. Andy out in the desert, stuck with his domineering mother cannot help but be amusing, really helping with the image of him being someone who had no right to survive the apocalypse. I thought it was a good idea not to have Eve and Kevin in the show as much, I think they had around five episodes in total which apart from a bizarrely moving eulogy to Andy their scenes were not as enjoyable. There was character development though in that Kevin's perfectness starts to slightly not look as attractive as it used to, while Eve seems genuinely upset that Andy has gone. 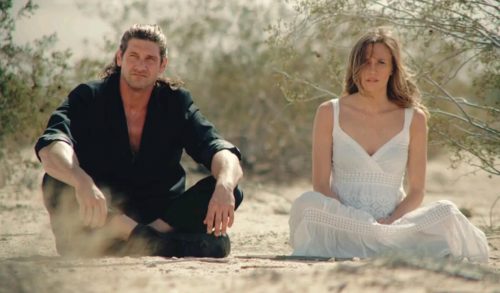 Season 1 was missing any actual undead so it is great that they feature this time around. Fitting with the surreal vibe the zombies all talk, sure it is probably all in Andy's mind but the conversations are pretty amusing, especially the one with dead pan Brad (Zac Titus) who was the highlight of the whole season for me. It was also great to get a flashback episode set during the high carnage of the apocalypse. The humour was all fine enough but Bad Timing felt at it's best during the more darker moments. Moments where characters lament the world they have lost, and the first kill of Andy's were both strong moments that displayed why the show can be so unique in what it does. Not everything was a hit though, the Eve and Kevin episodes never shine like the other ones do, and there was one episode revolving around a pulled muscle that never seemed to go anywhere.

I think the best thing season 2 offers in introducing characters that feel like essential new additions. Both Sam and Phyllis fit in neatly to the zany world, while having the undead talk was a genius touch. All in all this was a more polished version of season 1 that seemed to improve in a lot of ways. Once again ending on a cliff-hanger I really hope there is a third season as again I am intrigued as to what direction it will head in next.