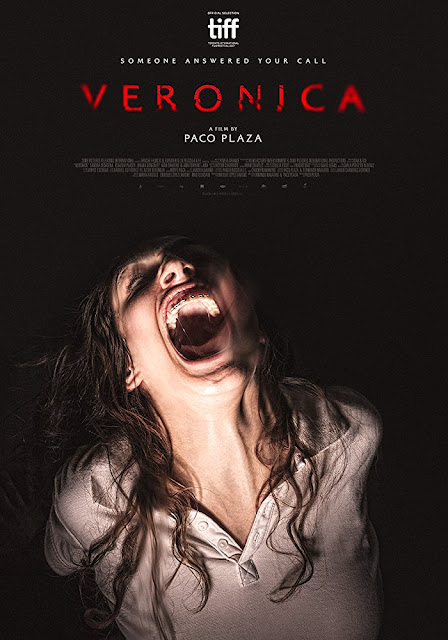 I watched Hereditary last week and really enjoyed it, yet I didn't find it scary despite hearing it was supposed to be. Earlier in the year I heard about a Spanish horror film on Netflix called Veronica that also was meant to be a scary film. You know what? If I had been watching it at night in the dark I think this one I actually would have been creeped out by, even in bright daylight there were a few bits that made me feel unsettled.

Veronica takes place in Madrid in 1991 and is about a 15 year old girl; Verónica (Sandra Escacena) who uses a Ouija board with some friends during a solar eclipse in the hopes of contacting her deceased father. She soon learns she has accidentally summoned an evil spirit that has latched onto her that means harm to her family. 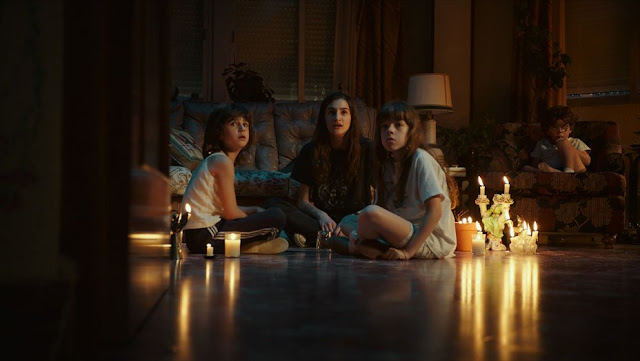 I thought this was a great horror and it got better upon learning a few things. Firstly it was directed by Paca Plaza who also happened to direct the [Rec] trilogy of films, secondly was that this was actually based on a true story. Usually when this is stated it turns out to be very very loosely based on truth while at the same time shouting from the rooftops it all happened. Here with Veronica I didn't even realise it was based on a true story until a series of crime photos are displayed at the films end that were different enough to what I had seen that I did a quick search and found out these crime scene photos are the ones from reality.

I was just saying the other day that I really like films about possession, one of my favourite sub genres. With this one you have everything going for it. It starts in the present with a panicked girl speaking to the emergency services begging for help, before going back around a week before to show the lead up. I love this plot concept as it really does put some meat on the bone so to speak, you know right off that something quite horrific is going to be shown down the line. The seance occurs within around ten minutes of the film starting and really impressed me with the editing. As Verónica drips blood from a cut on her hand to the image of a sun drawn on the board it edits in with the solar eclipse happening outside, it's a very neat looking sequence that let me know I was in for some quality directing. The music though is a bit hit and miss, there are two horror moments that are ruined by a score that sounded like it came from a 1950's creature feature. The rest is great, is just strange two bits felt really out of place. 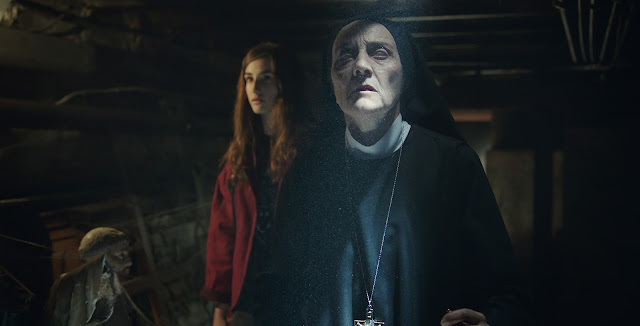 I liked here how helpless Verónica really is, for reasons unknown to her,  her friends shun her, then there is the fact that she is essentially looking after her two younger sisters and her young brother due to her mother constantly working. All the stress of caring for those, coupled with the knowledge that something unnatural is going on and it's a melting pot for disaster. Usually with these types of films it is an adult who is the protagonist, and there will come a point where they will seek out an expert to assist with their problem. Here though it being a child she doesn't really get assistance, aside from the creepy blind nun (Consuelo Trujillo) from her school who only helps in a roundabout way. Verónica is the perfect character type for a possession film to be about due to her situation, while her family dynamic can't help but make you pity her, Escacena does a great job.

The horror is there from the start with the seance and never goes too far away. The troubles come at night at the apartment she lives at and over the days escalates in various ways. It was only really the last third when the horror become tangible. It mainly takes the form of a shadowy figure that likes to strangle. There are also a few nightmare sequences that were quite effective. One had her siblings hiding in a cupboard as her dead father stands across the room saying the her name over and over again. Another scene has her being woken up by her sisters who promptly start biting flesh out of her arms. It helps that the whole family are great. With children actors all too often they over act, or have lines that sound like they were written for an adult character. Here though these are kids and they act like kids, argumentative, lazy and easily distracted without coming across as annoying. The whole family dynamic felt real and so added a lot of charm to the characters. 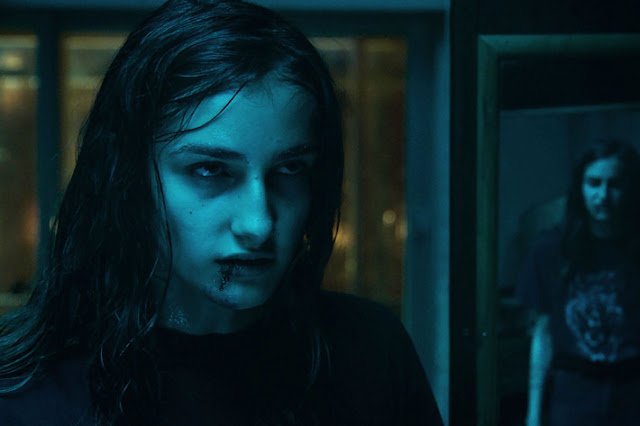 It culminates in a crazy finale that was well worth the wait, there were really cool twists and turns along the way and the very last five or so minutes take place after the phone call to the emergency services Veronica opened on leading to an interesting epilogue. This is a gem of a film, don't let the Spanish language put you off, the subtitles are not a barrier to understanding this. I would say I liked this just as much as Hereditary.