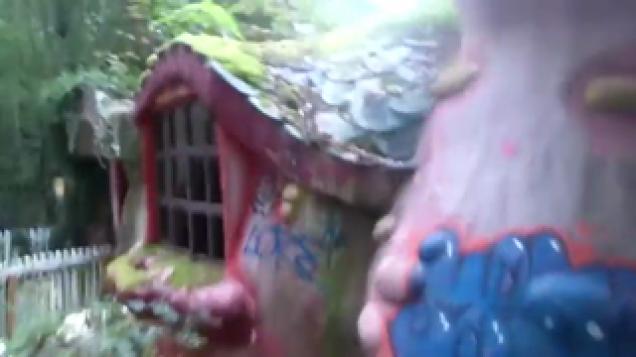 I had been planning to put up a review of zombie horror film It Stains the Sands Red today, however upon getting back from my lunch break a friend recommended I instead check out The Blobby Witch Project for review instead. I once got a DVD called The Bogus Witch Project which (witch?) was a collection of short films parodying that cult movie of a similar name. It was trash with every single film being garbage and so I didn't hold out much hope for this one.

A man is making a video about an abandoned cottage that was used as a tourist attraction when Mr Blobby (a large TV mascot popular in Britain in the 1990's) was in fashion. In modern day (well, 2014) the place is a ruin that is covered in graffiti and has signs of being used for illegal parties and for homeless people to sleep in. As the man explores the cottage he soon discovers to his horror that the owner of the building is in attendance and is none too pleased that someone is in his home...

This is just over three minutes long and I was surprised that it is played more seriously than I expected. I always found Mr Blobby to be unsettling in the first place and so to have him show up in a horror setting with that distinct weird voice was actually effective. The pacing isn't the strongest with this one though, the actual appearance comes just 30 seconds before the film ends and so while it was great the lead up to it felt a little bit laboured. I felt maybe if there had been unnoticed appearances earlier on it would have benefitted the anticipation of the horror. Also I felt a night time shoot would have added a lot of atmosphere.

Still this was an effective little horror that had a subject matter that was unexpected. I really liked the juxtaposition between the innocence of the original setting and the modern day ruin that gave it an ominous vibe. I really loved the last half minute of this, especially as it was scary yet at the same time funny in the surrealness, check it out for yourself below.

Thanks man!
I've made some other horrors on my youtube channel and website if you ever want to check them out!

Thank you for making something so weird, I had a look at your page and there are a couple I might take a look at :)