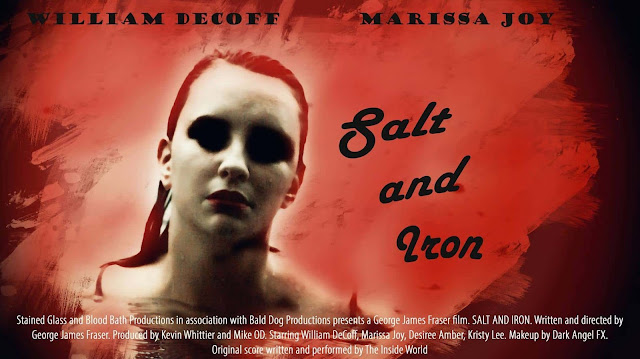 Salt and Iron is a short horror that is around 11 minutes long, that was directed by George James Fraser. This was a fun short that succeeded mostly due to a great choice for the main lead, and a fantastic soundtrack.

A redneck (William Decoff) is out fishing in the forest when he encounters a mysterious young woman. Following the girl through the trees he is led to a group of other females where it seems his dreams are about to come true... 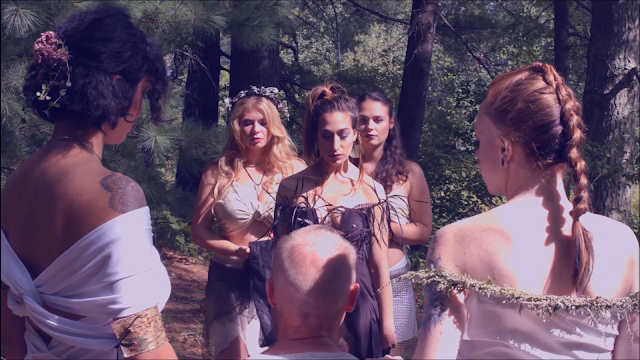 The best thing about Salt and Iron is the great soundtrack that I can badly describe as 'synth banjo'. It starts off all Deliverance like and then builds up to greatness adding so much atmosphere to this mini piece. Aside from the man talking to himself at the films start there is no dialogue, the women speak through their body language with the man seeming to be under some sort of spell from them. Decoff was great, he looked the part and gave a believable performance. The women were also all good, and strangely intimidating in their numbers and the silent way they moved around. A lot of them seemed to have tattoos and piercings which did make me wonder what they were meant to be, there was a dreamlike feeling to what was happening but due to body markings I did wonder if they were a bunch of cult members or if it had been intended that there was something more ethereal to them. Also there was a scene at the end where I couldn't tell if something was being eaten or merely touched as characters seemed to be doing both, knowing which would have changed the context for me slightly.

There is full frontal female nudity here but it does make sense within the context of the film and mainly exists in a scene that features plenty of blood, these women are in no way being shown in an exploited sense, they are all in the position of power. It ends on the perfect shot of the man's fishing rod catching a fish which was just the best comparison for the events that had occurred, a darkly comedic way to finish. Salt and Iron had a good cast and that wonderful soundtrack, well worth a watch if you ever get the chance.

Posted by Daniel Simmonds at 15:35