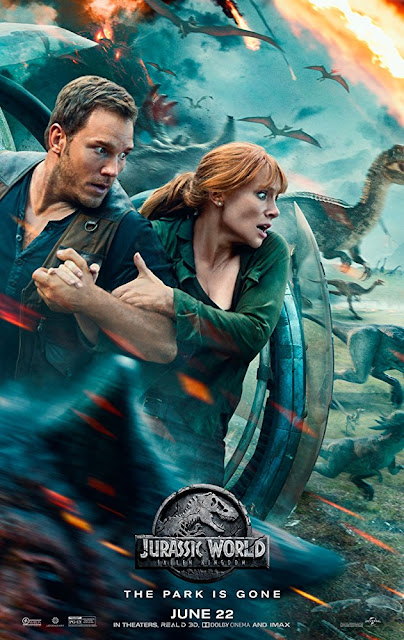 I have bad memories when I think of Jurassic World, whenever anyone asks my opinions on it I state it was trash and that I couldn't stand the characters. I was surprised then to see I had given it a 7/10, and so while Jurassic World: Fallen Kingdom is a much better film than that one it perversely has the same score. As an added admittance I am extremely tired both as I watched the film and as I write this review, so apologies if it seems particularly poorly written.

It has been four years since the disaster on the island that was home to Jurassic World and in that time the dinosaurs have been left alone. However a volcano long thought dormant has become active again and unless they get help the dinosaurs are going to become extinct once again. Claire (Bryce Dallas Howard - Jurassic World, Black Mirror) is recruited by the current owner of the dinosaur franchise; Eli Mills (Rafe Spall - The Ritual) to help try and rescue the creatures before they are wiped out, he plans to rescue as many as possible and take them to a protected area where they can live in peace. Claire recruits ex raptor tamer Owen (Chris Pratt - Jurassic World) to help, as Eli in particular wants to save Blue; the last surviving raptor. Not everything is as it seems though and soon Claire, Owen and a few others find themselves in a battle to stop the creatures being sold on the black market as living weapons... 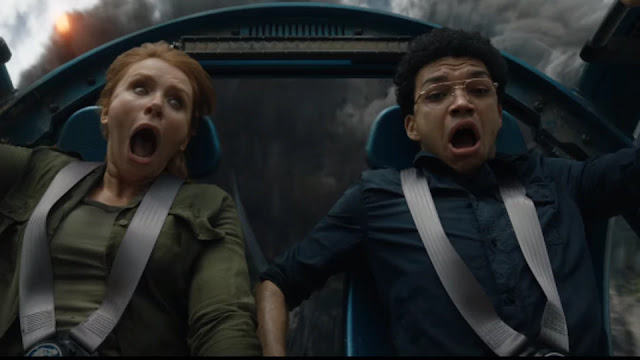 The best thing about Fallen Kingdom is that there are no super irritating children. The characters of Zach and Gray ruined every single scene they appeared in before, here thankfully they are gone. This is a much more serious film in that it manages to claw back some dignity that the overly family friendly previous film lost. Around two thirds of the movie takes place at night in the rain which couldn't help but bring back memories of Jurassic Park. There was a bit of a bluff with the trailer in that it appeared that the whole movie would be the volcano on the island, in actuality this island section is only the first third of the two hour film. The main part centres around a large mansion...Resident Evil with dinosaurs instead of zombies? Almost if you squint your eyes it is. Meandering I was for a bit, my older point regarding the children is that there is one here who has quite an integral part. Isabella Sermon plays Maisie who is the grandchild of John Hammond's (the owner from the first trilogy) brother. She is a lot less irritating than the 'hilarious' comedy duo from before and so she worked a lot better.

I don't know if it is due to her fantastic performance in Black Mirror but I found Bryce Dallas Howard to be a lot less annoying as Claire this time around. Both her and Chris Pratt played probably my favourite characters here. A lot better than the side characters such as comedy character geekish Franklin that was the archetype of a fish out of water, out of his depth and constantly getting into ridiculous situations (such as being mistaken by the bad guys as a hired help for half the movie). Spall was fine enough as the main antagonist, the character was pretty flat and typical as a bad guy but he was able to inject some life into this template. Toby Jones (Morgan) also had a great role as a corrupt business man, he played up his role well. 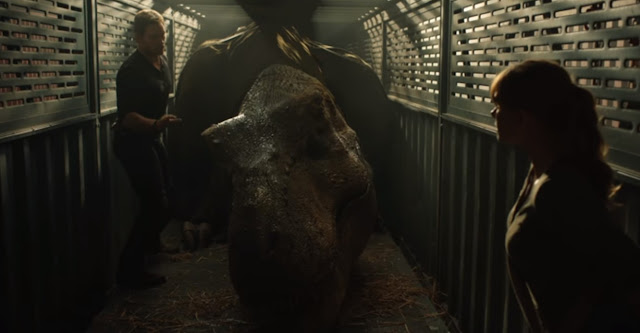 While the plot has twists and turns it eventually settles down into a predictable template where you just know the bad guys will get their just desserts in a variety of satisfying dinosaur based deaths, and that the good guys will constantly cheat death and save the day (in a way). It is good then that the special effects are really good, I was constantly impressed with how the creatures looked and all got memorable scenes. There is the traditional T-Rex appearance and roar that is starting to feel a little bit cheesy but still great to see. The raptor gets a fight sequence, and it was nice to see some different dinosaurs have cools scenes, including an entertaining sequence where a hard headed creature causes carnage in a room of evil doers. Jurassic World had its super dinosaur and a plot point of Fallen Kingdom is yet another super dinosaur, this one that is set up to be even more vicious. It leads to an exciting final third of the heroes getting chased all over a mansion by it, exciting aside from the fact that as mentioned I was tired and hoping for the end to arrive sooner rather than later. The violence is usually inferred rather than explicitly shown but you still get a little bit of blood, people being eaten whole, and at least one severed arm.

Fan service wise there is the cool appearance of Jeff Goldblum reprising his role as Ian Malcolm, though it was a very minor appearance. BD Wong is back again as well, an underrated part in my opinion as he is the glue that keeps the bad happenings happening. Jurassic World: Fallen Kingdom is an entertaining film that looks fantastic, and has a nice set up for the next film in this new trilogy. However despite some plot points that did feel interesting this was a pretty obvious story that never felt wholly original, borrowing ideas from no end of other movies, including The Lost World: Jurassic Park. A polished bit of brain dead entertainment that is a lot better than the previous one, just don't expect to get much substance off of its bones.