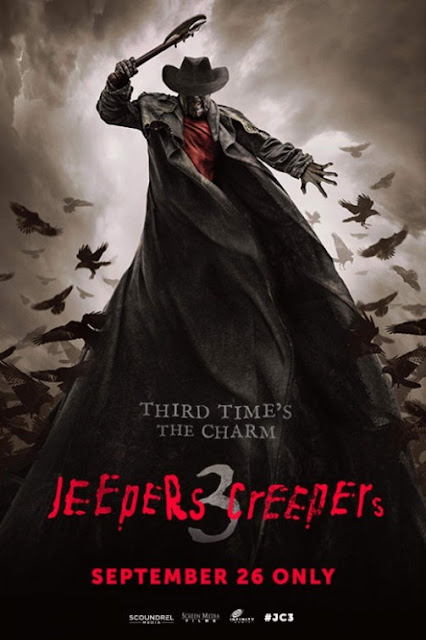 I really enjoyed both Jeepers Creepers and Jeepers Creepers 2, they were films I had almost forgotten about until Jeepers Creepers 3 popped up on Netflix. With that first film I enjoyed how novel the antagonist seemed, a monster who also had a lot of intelligence to it, even able to drive around in a vehicle. The second movie was more focused on a singular location and took the creature back to basics more with the iconic truck being nowhere in sight. I found the third film to be very interesting mainly due to when it was set. The sequel was set just four days after the events of the first movie and so it was a brave decision to have this new one set just one day after, in between those two. I say brave as it obviously means the Creeper cannot be defeated due to him being alive and well in the second film.

On the eve of the Creeper rampaging through the police station (the third act of the first film) Sheriff Dan Tashtego (Stan Shaw - The Monster Squad) appears, he has had previous experience with the monster 23 years previously and so knows exactly what his men are up against. He organises a crack squad of Creeper survivors to hunt down and finally kill the beast for good. Meanwhile Gaylen Brandon (Meg Foster - They Live, 31, The Lords of Salem) is visited by the spirit of her deceased son who warns her that the monster is back and will be heading to her farm to retrieve an item of importance that he buried there...

So I was quite excited when I discovered this was set between the two other movies. Having recently seen Phantasm: Ravager (another unexpected sequel to an old franchise) I was braced for low quality but also expected plenty of fan service. Well I was right on both fronts. To be frank until the later half of the movie the quality was actually pretty good, this didn't feel like a cut rate horror, the Creeper (Jonathan Breck again reprising this role) looked great, there were plenty of cool scenes that worked, and the van was back in all its glory (or should that be...gory?). However later on there seemed to be heavy use of quite average looking CGI, especially during a key chase scene that was nearly ruined by the inclusion of homing bombs that really did not look anything more than superimposed over the scene. I understand this didn't have the best budget but was still something I found that brought me out of the immersion.

Thankfully there is plenty of fan service with references to both previous films (this sets up the events of Jeepers Creepers 2, while this film picks up at the exact moment the first one ended). The van was the real highlight as it was sadly missing from the first sequel. Here it is shown to be even more crazy than before, being totally bullet proof (even the damn tires!), has a series of booby traps such as a harpoon on a wire, and spike traps and even seems to be able to drive itself. The craziness also applies to the Creeper's weapons with the previously mentioned homing bombs able to change course on a whim, and the Creeper able to use a Star Wars style force pull to retrieve his axe when it has been thrown. Despite several characters discovering a way to see the origins of the monster it is frustratingly never revealed to the audience which felt like a bit of a missed opportunity, there is the idea for a fourth film in the mind of the controversial writer and director Victor Salva but who knows if that will ever come to fruition. On the subject of a sequel obviously this couldn't finish the storyline due to it taking place in between films but this kind of ends on a similar note to 2 with a scene set 23 years later with a familiar character prepared to kill the Creeper when he returns (why they don't just hang out at the barn where the monster is on display I do not know!). 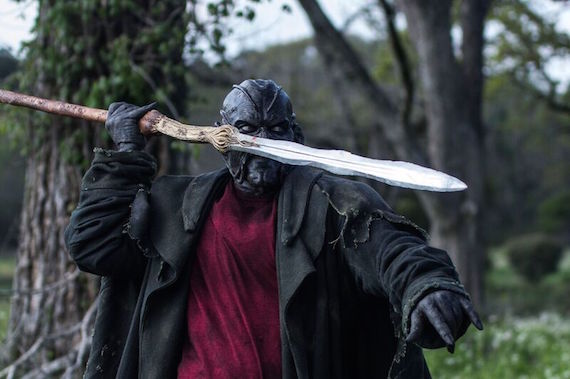 The story here isn't bad, I loved the prologue that has cops trying to investigate the truck they have discovered, it gives a nice enough briefing on the finale of the first film. The notion of a team of survivors from the creatures last rampage was also a neat idea and it was cool to see Brandon Smith reprising his role as Sgt. Davis Tubbs, an unexpected return for what was essentially a minor character before. Also the idea that the Creeper has to tie up loose ends from his previous rampage each time he reappears I found interesting. The main protagonist is farm girl Addison (Gabrielle Haugh - The Midnight Man, 13 Reasons Why) and she is a miserable character with not much to her at all, I much preferred Shaw's character, while he does get a lot of screen time I feel more of the focus should have been on his interesting role. While Breck did look great as the Creeper the perpetually angry monster needed something more to him, and the decision to give him a cheesy angry scream scene (that heavily reminded me of Darth Vader in Star Wars: Episode III - Revenge of the Sith) was not a good one.

Regardless of the budget constraints and the average CGI I still liked this one quite a lot. Personally I didn't like how the third act played out, for me that was enough for it to lose a zombie head from my score. This has plenty of fan service and I really admired the decision to have this set in between the other films. While it isn't as good as either of those ones this is still a fun movie that doesn't tarnish the reputation of the franchise.

Posted by Daniel Simmonds at 03:54

Well, they could always do a prequel. I'd pay to see one set in the late seventies or mid-fifties.