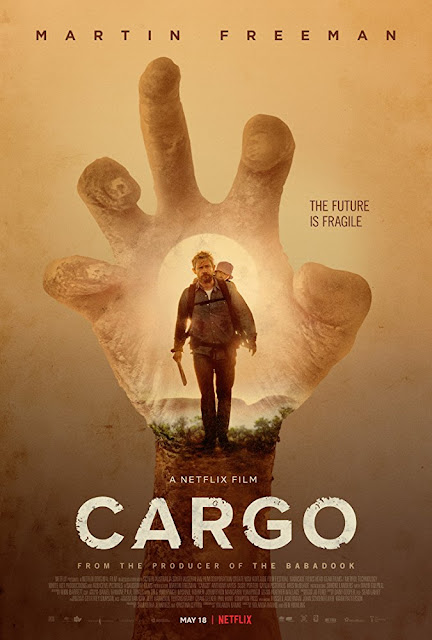 I had interest in seeing Cargo even before I realised it was a zombie film. This is not a typical undead movie, despite the adventure aspect of this it shares a lot in common with Maggie, because of that it also shares the same flaws that that one had for me. Cargo stars Martin Freeman (Ghost Stories) who is one of those rare actors that I just do not like in any role he does, that is not a fault of his acting ability, it is more that I have never seen him play a character that appealed to me, here is no different.

It is an unspecified time after a viral breakout turned most the population (of at least Australia) into brain dead zombies. Andy (Freeman), his wife, and their 1 year old baby Rosie had been travelling on a river in a houseboat in the wilderness, but a situation causes them to leave that and head into the outback itself. Soon Andy is on a mission to find someone suitable to look after Rosie for he is infected and has just 48 hours left to live before he turns. 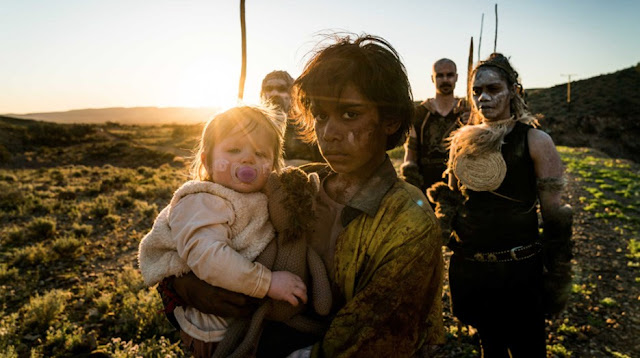 Much like Maggie this focuses on relationships between people rather than the overarching pandemic. Because of this there are not many scenes featuring the infected, they take a background role with them glimpsed by characters but usually at quite a distance. In fact there is only really the one action scene here and that comes right towards the end and doesn't even feature the main cast. The plot centres on Andy and Rosie and so Freeman has to carry the film on his own a lot (as well as carrying a baby on his back). His character was designed to be a 'fish out of water' so he spends a lot of time making bad decisions and coming across as a bit of an idiot, in fact the reason he is on a quest to find a carer for his child is a direct consequence of a series of bad decisions he makes at the films start. Aside from the baby that doesn't count as an actor there is also Thoomi (Simone Landers), she is a young indigenous Australian that initially forms an alliance of convenience with Andy. As the movie goes on they come to form a bond of sorts, especially with their interactions with Vic (Anthony Hayes) who becomes an antagonist for the trio. Hayes did well with his role, giving a menacing performance to a character that felt a little bit one dimensional at times.

With the undead taking a background role the journey becomes a focal point and so Cargo features plenty of stunning vistas helped by some sometimes wonderful cinematography. Especially impressive were the long overhead shots that showed the characters as tiny figures in a vast environment. Also being out in the middle of nowhere explains why there are so few zombies. This had a habit of action taking place off camera, I think this was probably more to do with keeping the focus on the characters rather than any budget constraints. 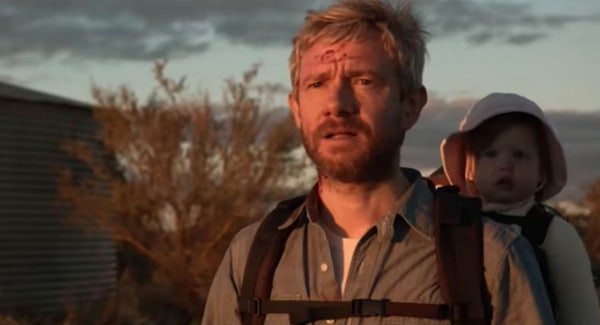 The zombies here are fine enough but then you never really get to see them in any sort of detail. They have a transformation to them that causes their faces to get all gunked up with some sort of yellow coloured sticky fluid. They are flesh hungry but also quite zoned out and meandering, so never come across as much of a threat. They have a weird habit of going into a hibernation mode, something that the characters are aware can happen but which is never explained to the viewer. At one point the characters walk through a tunnel full of these hibernating undead without a care in the world that they might suddenly awaken and attack.

Cargo is not concerned with scenes of high violence and gore, this outbreak is an analogy for the destruction that people have brought to the indigenous people of the world and their way of life. It seems here that nature is righting itself, the Aboriginal characters are treated with a lot of respect and shown to be the ones best suited to survive in this strange new world. While I felt this was a fine enough film I did find that just like Maggie it did become a little bit dull at times. Add in a flawed main character and some location shifts and you have something that is beautiful to look at, sometimes quite emotional, but not really designed to appeal to those wanting something a bit more intense.