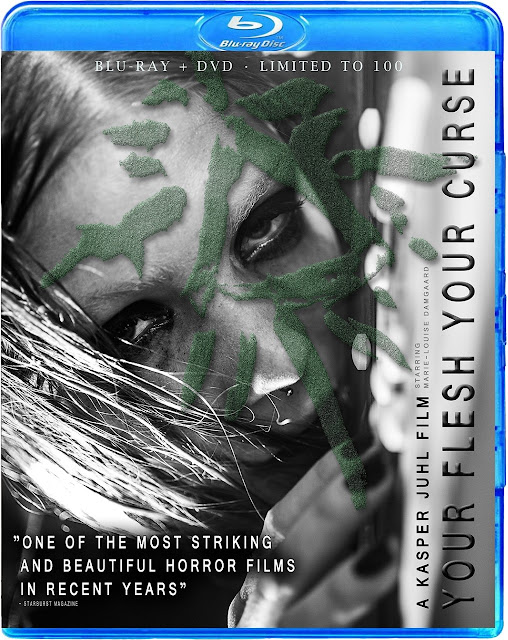 For better or for worse Your Flesh, Your Curse (written and directed by Kasper Juhl - A God Without a Universe) is an arthouse film of the highest order. This particular type of film can be a bit hit and miss with me, I really have to be in the right mood. Where some go for quick edits this one instead goes for long slow shots. I have to be truthful, I barely understood much of what was going on here, and that did get in the way of my enjoyment, but regardless this has some wonderful cinematography, and some great directing.

Juliet (Marie-Louise Damgaard Nielson) is a deeply troubled girl which seems to stem from sexual abuse at the hands of her father many years previously. Now she spends her days taking all manner of drugs in order to get high and escape the desolation that is her life, and to pay for these drugs she works as a prostitute for some pretty perverse low lifes. One day while passed out in a field a random stranger rapes and then brutally murders her. Juliet awakens in the afterlife where a spirit guide sends her back to pivotal moments from her past (possibly, as I said I got very lost very quickly). 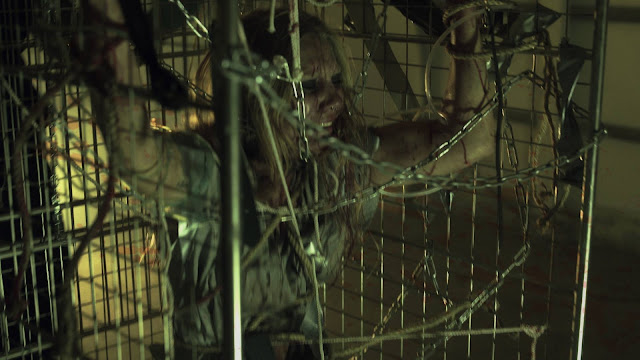 As you may have guessed my biggest problem with this is that I just completely lost track of what on Earth was going on. In the middle of a very busy and stressful work week where my brain has started to feel like mush this wasn't perhaps the most fitting time to view this. The structure of Your Flesh, Your Curse is interesting in that it doesn't play out in an order of any sort, it seems almost cylindrical in that scenes pop up again and again at various times. Scenes that have already occurred take place again with different outcomes, such as a scene where Juliet takes ecstasy with her best friend, the second time it occurs she instead refuses the drug and leaves the room.

So the crux of this movie seems to be drugs, rough consensual, and rough non-consensual sex, torture, and a huge dollop of misery. Juliet has such a bleak and terrible life that when she is killed thirty minutes into the film I did think that maybe the afterlife would be better for her. In various scenes her, or other girls who look similar to her are tortured by various men and women, murder people, self harm to a grotesque degree (pulling out nails from their hand, ripping the flesh on their arms and face open). It got so much that rather than be repelled I instead started to get a bit bored. In terms of artistic value this really picked up in the last 15 minutes, but by that point I was quite drained, both in the unhappiness of this movie, but more that there isn't much variation in the trails that the girls go through.

The acting called for demanding performances, and Damgaard Nielson is great at really bringing out raw emotions with her unhappy character. The cast were not huge in number but there were no bad ones among them. A particular stand out actor was Bill Hutchens (The Human Centipede II) who played Juliet's father, he gave such a fantastic performance that he was almost spell binding. The world's most prolific actor Kim Sonderholm was also in this movie, though I have to confess despite looking out for him I totally missed his appearance, he played a character called Stephen according to IMDB, as mentioned there was no bad acting here so I am sure he gave as good an appearance as ever.

Of particular interest to me was the wonderful cinematography that was helped immensely by really long single shots that were both perfectly framed, and perfectly lit. The moments when Juliet first appears in the afterlife had such a fantastic look to them, helped by the pale makeup she had on. The best single shot by far was when the stranger discovers a passed out Juliet, this one shot was on screen unbroken for what seemed to be around five minutes, she was perfectly located near the middle of the screen with the sound of wind, and the grass billowing around her. The score was also noteworthy, it fitted this very well and just added another layer to the visuals being shown.

Your Flesh, Your Curse was a beautiful looking film, I do wish I had been able to work out what was actually going on, I also wish it hadn't been as abstract for my tired brain to process. While I did start to get a little fatigued from the similar goings on, and seemingly lack of a story at least I had something audibly, and visually interesting to appreciate. The very dark and nihilistic Your Flesh, Your Curse is due to get a DVD/Blu-Ray release that is going to be limited to just 100 copies, that is due for release on May 7th. If your interested then head here, though pre orders are almost sold out.