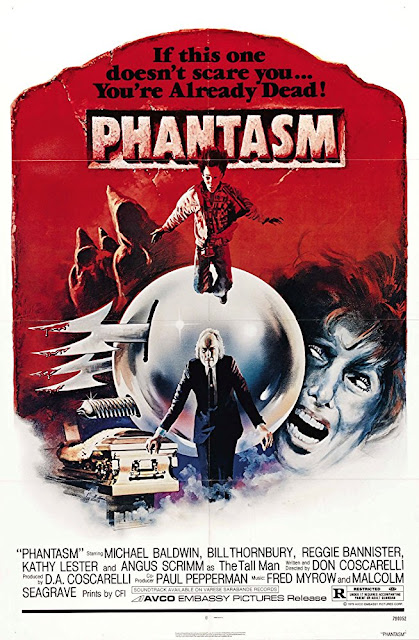 Back when I was still getting properly into the horror genre my parents brought me a DVD that contained clips from various horror franchises such as Friday 13th, Leprechaun and Candy Man. It was the clip from Phantasm which really stuck with me though, the scene featuring the iconic sphere. I have been meaning to re-watch the series for a while now as I have never seen 5th installment that came out in 2016, so today on a week off of work I decided to head back into the surreal world of The Tall Man.

13 year old Mike (A. Michael Baldwin) has snuck into the Morningside funeral home to see the funeral of Tommy; a friend of his older brother Jody (Bill Thornbury) who recently was found dead in strange circumstances. Once everyone has left he is surprised to see the funeral director (Angus Scrimm) single handedly placing Tommy's coffin back in the hearse and driving off. Mike idolises Jody who looks after the boy since their parents died a few years previously and so follows him everywhere. One night while following him to the cemetery Mike gets attacked by a hooded dwarf which further cements the idea that something very wrong is going on at the funeral home. Soon Jody and his friend Reggie (Reggie Bannister) also figure something strange is happening, their investigations leads to the discovery of an army of evil zombie dwarfs, deadly floating spheres, and the terrifying reality bending powers of the otherworldly Tall Man... 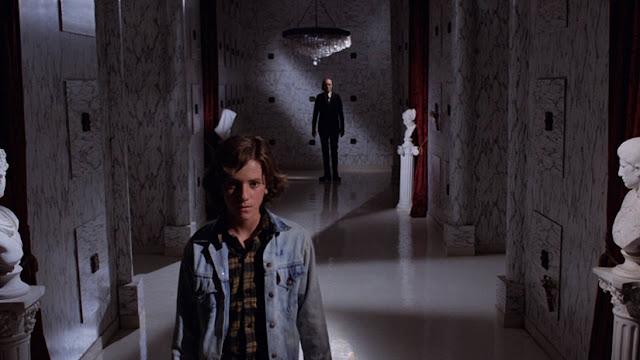 I haven't seen this movie in quite some time, at least ten years and so I was slightly concerned that this wouldn't match the fond memories I had of it. Thankfully this even surpassed my expectations, there is no doubt in my mind that this is a stone cold classic - they really don't make them like this anymore! There is a strong sense of a nightmare about this, a lot of stuff doesn't make much sense, while characters die only to show up fine later on and vice versa. Then there are the many iconic dream sequences, the use of slow motion and exaggerated sound effects, and iconic shots that make so much of this memorable.  I just love how many different elements are going on here to always keep you glued to the screen, and how nothing is really explained in terms of what is happening and why.

Scrimm is fantastic as the antagonist and a very memorable villain. So called The Tall Man due to his size (getting on for 7 foot tall with the platform shoes) he has a wicked sense of humour that never goes as over the top as Freddy Kruger but injects him with more personality than the Michael Myers and Jasons of the horror world. The hints of an alien origin also added a lot of mystique to him, I was so glad there wasn't an explanation for just who or what he was. My favourite scene with him has him showing up at Mike's house after Mike has previously sliced off his fingers. The door opens and The Tall Man is standing there holding his apparently fingerless hand up, before flipping his hidden fingers up to reveal he is whole, and smiling at the scared boy. He features in some of the most memorable scenes of the film, such as Mike waking up in bed to see the figure looming over him, the slow motion walk through a town street, and of course the sphere sequence. The actors all do great jobs, even side ones such as the femme fatale (Kathy Lester credited as Lady in Lavender) stand out due to how the camera frames them, and the sublime editing. 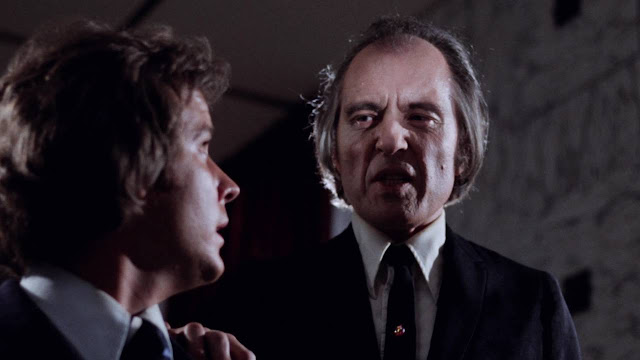 Sometimes the effects are not the best, blood and flesh has an almost plasticine look to it that reminded me of The Evil Dead, then one pretty terrible looking scene has Cody and Mike wrestling with a blatantly rubber insect creature. Some of the effects are very effective though, again going back to the sphere scene. For those not in the know the sphere is a flying mirrored orb that chases its victims before embedding itself in their head, before a drill comes out and siphons all the blood out of the person, a very original and cool idea (that apparently came to director and writer Don Coscarelli in a dream). The hooded dwarfs are a little bit more silly, mainly due to how hard it is to take them as a viable threat. Saying that a scene in which they break into a car before driving off with two screaming women trapped in it was very nicely done.

Phantasm is a master class in classic horror directing. It may not be scary, but it is full to the brim of great ideas, a sustained sense of bizarreness, a wonderful soundtrack and spirited performances. The plot does lose speed towards the end, and there is a rushed finale featuring an idea straight out of a Scooby-Doo episode. Regardless though this is ever fascinating to watch and a shining example of just how Phantastic and varied the horror genre can be.