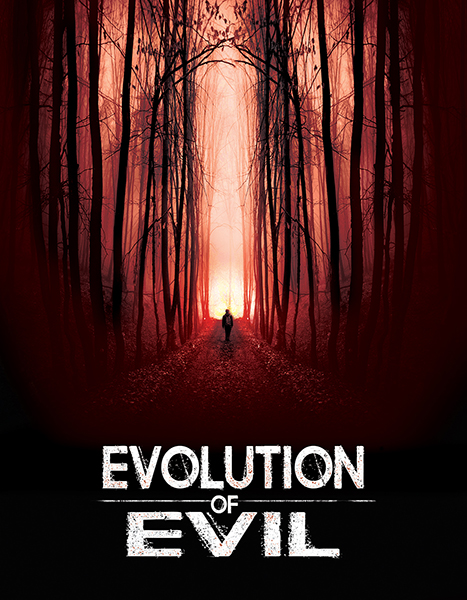 Evolution of Evil (also known as Removed) is a Deliverance type horror movie about the dangers of psychotic rednecks. At seventy minutes long this is quite a short feature film, but personally I think this would have worked much better as a short due to the excessive use of scenic shots that end up getting in the way of the story.

Lori (Erin McGarry - Grimm) and her husband Christopher (Michael Draper - Grimm) are a city based couple who have gone on a camping trip out into the deep country of the Pacific Northwest. The judgemental couple want to get away from the stress of their daily lives and enjoy 'beef' jerky and nature. However it is not long before Christopher has been captured by two local rednecks and taken away to their home. Meanwhile Lori wakes up nearby to her tent with a gunshot wound to her arm, and no idea what has happened to her husband... 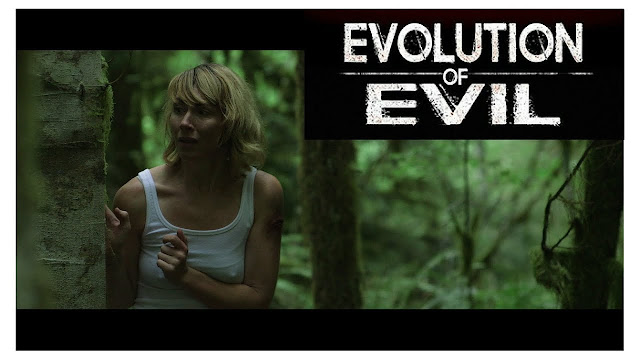 Evolution of Evil starts off so well, there is a really good sense of the twosome going deep into the back roads of America. They don't pander to the audience in that they are very stuck up about the people they encounter, sure that they are the most important people around. The trouble for me started in the strange way this movie is set out due to important scenes being completely missed out. When Christopher early on gets captured I was less involved in that and more wondering where on Earth his wife had gotten off to. When she is shown to be passed out nearby I had no idea why she was where she was. Eventually a lot later she explains what happened to her to someone she meets, but I found it kind of irritating this key scene doesn't get shown. This again occurs later in the film where a scene starts with her leg caught up in a rabbit snare, again the scene of this happening was missing. I understand the intent of wanting to make the viewer work for the plot but it felt like scenes were Removed when they would have been better being shown.

This isn't down to a lack of space to show these events as the other problem I had with this film is how much of it is devoted to scenic shots of the forests. As the plot goes on these shots get smaller and smaller but it started to get quite tiring. You get really slow pans of the trees, as well as static shots focused on a particular aspect, such as a frog jumping into a stream. These all look beautiful, the film as a whole is very nicely shot with some nice cinematography, but these scene setting shots often impacted on the story with on at least one occasion me almost forgetting what was going on due to the long cut away to nothing. I feel these were in so much abundance to get the message that the couple really had returned to nature, that everything that was happening was nature working its magic. Nowadays drone shots are all the rage, a particular 360 degree swoop drone shot is used on at least three or four occasions here, while again it is a nice piece of film work it did cause the film to get dragged down in unnecessary details.

The cast is very small with only really four main characters. Draper is decent enough but doesn't really get to do much other than play the victim. As for McGary I enjoyed her role due to how she wasn't really a victim, rather than get scared at the awful ordeal she finds herself in she instead gets angry, her feeling of superiority only increases the more danger she is in. The rednecks were both played well, the wraparound sub-plot insinuation about where the supply of the popular local 'beef' jerky comes from I found to be pretty amusing. Everything looks believable here, the make-up effects on the characters look the part, and Circles (a traditional folk song by Liam O'Brien) is very well chosen and gives the film an identity it would have been lacking otherwise.

I feel if this had been trimmed down to around 45 minutes this would have been much more enjoyable. Inside Evolution of Evil there is a good movie, it was well made, the acting is good, and the plot decent enough (first time I think I have ever seen a character talked to death!), I just wish more had been focused on this aspect rather than getting lost in the splendour of the forests where this was filmed. Evolution of Evil is coming out thanks to Midnight Releasing.