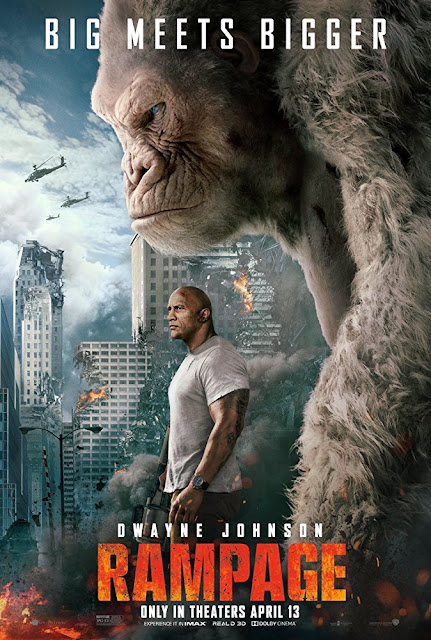 One of the stronger memories I have as a child was one lazy afternoon sitting down with a friend in his father's den to play through the videogame Rampage on his Master System. We played through the whole game start to finish in two player and remains the only time I have played the game in its entirety. I mention that because this film is the unlikely cinematic version of that simple game, I failed to see how this could be any good, but with Dwayne 'The Rock' Johnson on board I knew it would at least be entertaining.

So in the videogame three humans have been mutated into gigantic creatures; George the ape, Ralph the wolfman, and Lizzie the crocodile woman. The aim of the game is to destroy all the buildings in each stage while avoiding the attacks of the U.S armed forces. In the film adaptation these creatures are instead animals who have become infected with a man made pathogen. A shady research company had secretly been conducting illegal genetic experiments onboard a space station, they were attempting to perfect a bioweapon. However the experiment got out and the station was destroyed, three canisters containing samples of the bioweapon crash in America, one in a gorilla enclosure that Davis Okaye (Johnson - Doom) was in charge of, one in remote countryside that infects a wolf, and one lands in swampland that infects a crocodile. The company responsible set off a homing beacon that draws the mutants to Chicago, they hope that once there they will be able to retrieve a sample from one of the monsters, while the army killing the beasts will hide all evidence of their wrong doing. 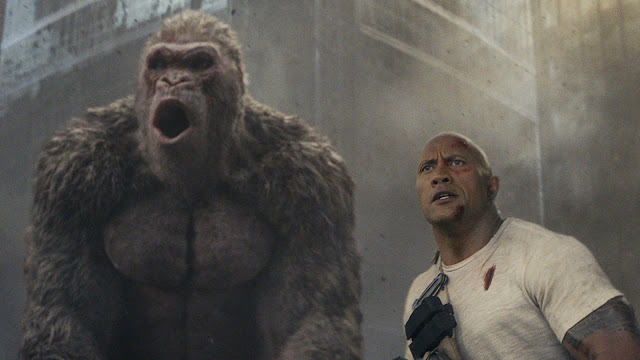 While this was a more fun videogame adaptation than Tomb Raider it also fell into the same traps that that one had, namely that it was pretty dull and predictable at times. I expected monsters rampaging around a city from the get-go, this only actually occurs in the last third of the film and so before that I was just waiting in anticipation of this event. When the beasts do finally meet there it leads to some quite visually appealing scenes, this is rated 12A but you still get to see plenty of people get killed and eaten by the threesome. This part is where it is most like the videogame with plenty of carnage with buildings getting destroyed, tanks and helicopters getting obliterated, and a lot of spectacle. Before this stand out moment we are treated to a great prologue with a giant mutant rat on a space station, it gave me fond memories of the fantastic Life from last year; space and horror mix together so damn well. I liked how this could almost have been a direct sequel to that film.

Before the carnage of the finale we get introduced to the heroes and heroines of the piece. W.W.E in the early 2000's was the golden age of wrestling for me, and The Rock was a key component of that. As such I just straight up like Johnson, makes me happy just seeing him and so it was good he was the lead here. He shares the most funny scenes with George the ape, their conversations in sign language may be over the top, but never failed to make me laugh. Johnson does as good a job as is needed for his likable strong man character, though it is faintly ridiculous him running around shouting 'George!' at his ever increasing in size friend. I guess a film based on an old game about giant monsters destroying a city is pretty ridiculous in itself though. To help him you have Naomie Harris (28 Days Later) who just looks better and better with age. Like Johnson her character was pretty simple and uncomplicated but she did a good job. Helping them out is Jeffrey Dean Morgan last seen as the terrifying Negan in The Walking Dead. I couldn't shake the Negan from my mind seeing him and so it was just weird seeing him as a good guy government agent. He shared the arrogant nature and even some of the mannerisms of that classic bad guy, but neutered in a role that didn't see him do much other than chew the fat. 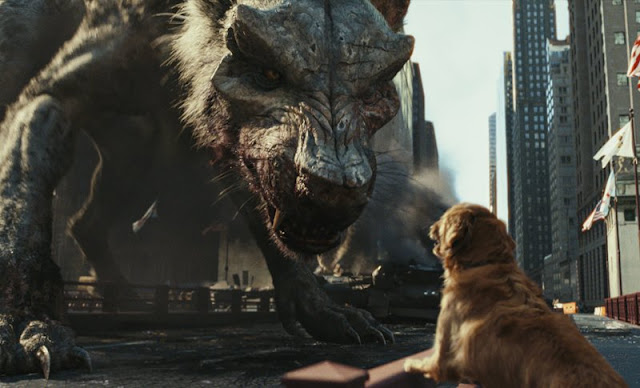 The special effects were not stunning, but they were better than average I would say, especially for the three monsters. There were some cool design decisions with these animals, Ralph in particular with his spines he could shoot out, and his wings he could glide with felt original. We have seen lots of giant apes in films so George was decent but nothing too special, that is aside from the great moments when he is not rampaging and instead interacting with Davis. I liked that the crocodile monster is only glimpsed for most of Rampage, finally getting to have some great screen time in the last third where it is revealed to be much, much larger than the other two creatures. The plot of course is basic, that's what got in my enjoyment the most I think, I spent the majority of this film bored at the obvious places the story went, there was no surprise in anything that happened. I shouldn't really expect more of a brain dead monster action flick but I did, I was relieved when the spectacle ramp(age)ed up enough that it no longer mattered if I was engaged with the story or not.

This is a dumb film, but it knows it is. It sets out to give a visual treat for the eyes, and as a means of escapism. Escapism is no bad thing, however I just wasn't in the mood to see something so predictable, more than once I caught myself nearly getting my phone out to check how much time was left. This really picks up the pace in the last half hour though, so it was good to finish things on a high note. Johnson and Harris were enjoyable leads, the effects not bad, and there were some fun moments, however just like the game it is based on it all started to get quite samey by the end.

Posted by Daniel Simmonds at 15:04