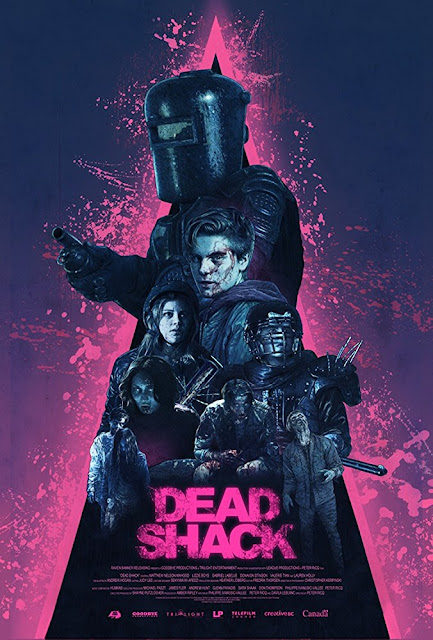 Dead Shack is a Shudder exclusive horror film that just so happens to be excellent, hands down the best horror I have had the pleasure of seeing so far this year. Think of a mash-up between Stranger Things, Don't Breathe, and The People Under the Stairs with a little bit of The Evil Dead thrown in, and add in fantastic acting and a hilarious script and that is roughly what this great comedy horror feels like.

14 year old Jason (Matthew Nelson-Mahood) has gone away on holiday to a remote woodland cabin with his best friend; foul mouthed Colin (Gabriel LaBelle - iZombie) and his family that includes older sister Summer (Lizzie Boys - also iZombie), easy going dad Roger (Donavon Stinson - Dead Rising: Endgame) and Roger's girlfriend Lisa (Valerie Tian - Jennifer's Body). While the kids are out exploring they come across the property of the next door neighbour (Lauren Holly) and accidentally witness her drugging some men, who are promptly eaten alive by some zombies she keeps chained up in her house. Discovering she had been watched, the neighbour tools up, and heads out to kill the witnesses. 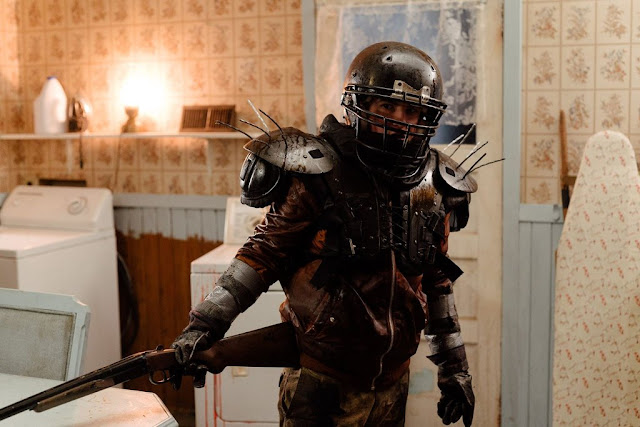 From the very beginning I got a really good feeling about this horror, it all starts off with great music, something which throughout Dead Shack remains very strong, a kind of 80's synth that reminded me of Stranger Things. The camera work is amazing, the cinematography in the prologue alone was enough for me to straight up love this, the framing of that first sequence was a work of art. Everything looks so crisp here, so considered and particular, I can't think of a single bad looking part here. Next up is the script from which the majority of the humour stems from. The family here are very dysfunctional, the dad in particular is really quite irresponsible in how laid back he is. So much of what characters say is laugh out loud funny, and usually quite inappropriate for the situation they find themselves in. Robert and Colin having an earnest heart to heart moment while off camera Jason and Summer are engaged in heavy combat with zombies, the occasional blood spurt flying into shot for instance.

The three teens are the main characters here and all do fantastic jobs, but it was Stinson who had the best role in my eyes. Usually in horrors you can't help but be baffled by characters actions, but here you have teens who don't know any better, and then Roger who is completely drunk and so not caring at all about what he is doing. I loved the random conversations he gets into when they are first exploring the neighbours house, such as talking to Jason about starting up a band called 'Sexy Cannibals', it was so random that it couldn't help but be funny. Stinson plays the best drunk of recent memory. With a very small cast it was great to see not a single bad actor among them, everyone from the waitress at a cafe, to random 'bros', and the zombies had funny moments, even the antagonist had a couple of funny parts. My complaint with the antagonist is that fantastic costume design aside she didn't really get much screen time. I understood her motivations, but there wasn't much to her character, and she had the films worst line when she explains to the teens that the police wouldn't believe she was responsible for everything due to them being 'sexist'. It was great to see a woman in the role of primary bad person though, with her, and Summer you had some strong female characters.

The special effects are another area where Dead Shack also shines. There is plenty of blood for one things, but then you have some great gags such as shotgun decapitations, and a great looking sledgehammer attack. The make-up on the zombies is yet again another area where this film shines, they look great also! This movie just does so much right and is only really let down in a slight way by the unrealistic actions of characters at certain points, and their lack of sustained emotion to loses sustained along the way. The plot is very simple and everything is as it first appears with no twists or turns to be found. It barrels along in such a fashion that it felt like the end credits appeared way too soon, though at 80 minutes it is a concise and trimmed piece that has no scene that felt unneeded. Though this is set in 2017 it did have a bit of an eighties vibe, best exemplified in a montage of the teens getting suited up for the final battle.

I adored Dead Shack, I am always a fan of a witty script anyway (such as This is the End, The League of Gentlemen: Apocalypse, and Four Lions) and this has a great script that goes hand in hand with perfect casting choices who rift wonderfully with each other to make a tight-knit group who you can't help but root for. This is an example of a film that just damn near gets everything right. Great acting, editing, cinematography, writing, music, effects and make-up; wonderful stuff! On the merit of this film director Peter Ricq (also co-writer) is one to watch out for.