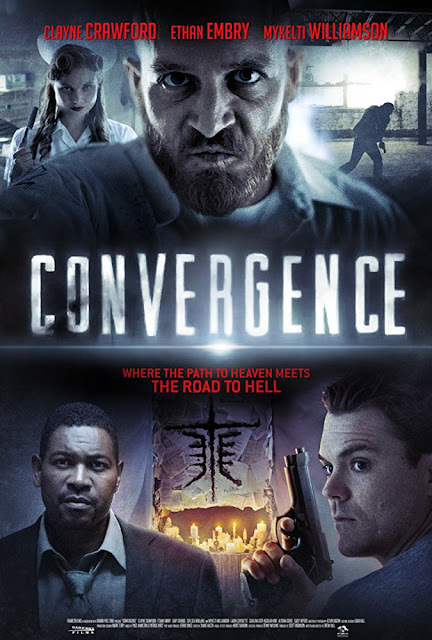 Convergence is a film that constantly surprised with where the plot went, this was despite some issues surrounding the sometimes muddled plot. It is actually the second 'person trapped in bizarre-world hospital' movie I have seen this year after Inoperable. What saves this from being a forgettable horror is the welcome inclusion of an actor who is fast become a favourite of mine.

While responding to an explosion in downtown Atlanta detective Ben (Clayne Crawford) is caught in a second explosion after witnessing a suspiciously acting paramedic in a warehouse. He awakens in hospital, but it is one that is mostly deserted, and populated by a bunch of strange acting people that include Ben's Captain (Mykelti Williamson). However also in the hospital is Daniel (Ethan Embry); a religious madman who thinks it is his job to kill all who are undeserving of God's love... So I guessed the early twist pretty early on with regards to just where Ben is and how he got to be there, but not content with this cliche move trope Convergence later goes to some really quite interesting places. Seventy minutes into the film a whole new cast of characters are introduced, these people have their own horror movie going on that perfectly intertwines with Ben's. This part was really quite clever, it even provides answers for just what the demonic looking shadow people were that were seen earlier in the film. This final act was welcome as up to this point Convergence just didn't seem to be going anywhere. The core part of the film is Ben vs Daniel and his cronies. For whatever reason Daniel seems to have a special power that convinces people to do his bidding, not supernatural in origin, more it felt that he provided answers and hope for other people trapped in the hospital.

The character of Ben had as much charisma as a sack of potatoes, so having him as the focal point meant some early harm was done to my entertainment, not helped by the tenuous links characters have to him and his past. The arrival of Daniel really turned this film around though. Ethan Embry just cannot seem to do any wrong, he was hilarious in light hearted drama Grace and Frankie, then with The Devil's Candy he showed how much range he had, and here as the principal antagonist he shows he can also do a bad role well. While I admit to be confused a lot due to how little is explained in Convergence Embry played the role of villian expertly. I love the conviction you can hear in his voice when he speaks, and the little bits he does, such as when he starts whispering to a man whose tongue he has just ripped out. For what could have been a wafer thin character Embry just adds so much to the role, he stole every scene he was in, both commanding your attention, while out acting everyone else. My problem with a lot of the other characters is that they just aren't fleshed out enough, they just show up on screen with little to no explanation of who they are, or where they have come from. 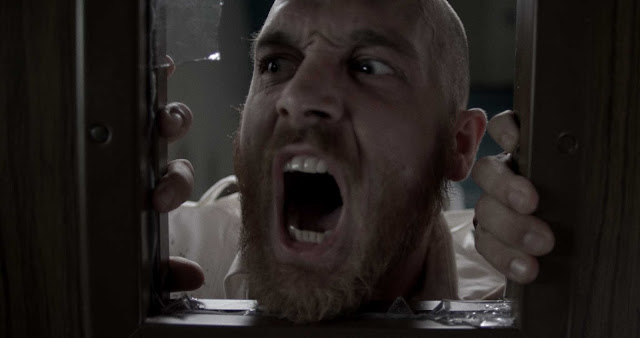 Convergence wasn't short of action scenes with there being plenty of shoot outs and close combat fighting that kept the excitement going. Personally I loved that Ben's method of fighting anyone is just to throw everything in the vicinity at his foe no matter what. This led to some pretty funny scenes of Ben throwing plastic trays, paper folders, even an empty plastic waste paper bin at people he was fighting. Shoot outs fare a little bit better, aside from the fact no one seems able to shoot each other very well, mostly just lots of weedy sounding pistols being fired. Saying that when a shotgun comes into the equation it leads to some fun moments, and unlike the pistols it actually sounds like it could do some damage. The editing and directing also isn't afraid to take risks, one part in particular had Daniel just about to kill a character for the scene to then pause (making me think briefly I had lost the internet connection to the screener!), while the action is paused a new scene plays out before the action continues. Things like that I really enjoyed about this.

It did seem a bit crazy to suddenly have an important new subplot pop up in the third act, but this part just works so much better than what had come previously, at least everything not involving Embry. One of the new characters introduced is a headstrong woman with psychic powers, she was a great character and I wish she had shown up a lot earlier as her abilities create some pleasing moments of her flitting between scenes. While sometimes I felt this got a little muddled in the story it was trying to tell I did like where it eventually went. The fact that the main lead was such a dull presence becomes a lesser problem simply due to the antagonist being so captivating. This may have some issues, but regardless I enjoyed my time with this all the way from start to finish. Convergence is being released in the UK by High Fliers Films on 23rd July this year.