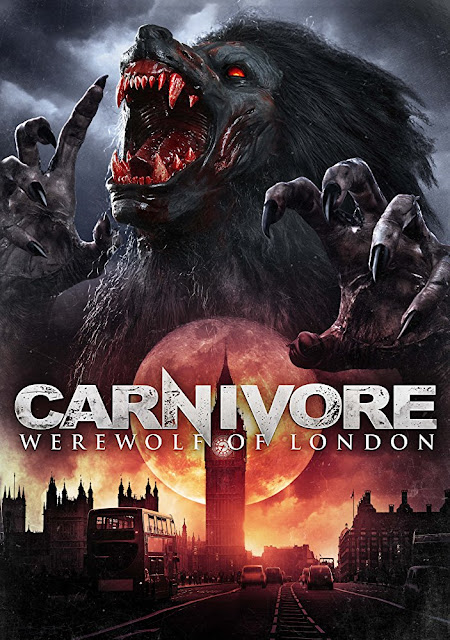 As disclosure right at the start of this review of Carnivore: Werewolf of London I just don't rate the werewolf as a movie monster. To me it always seems like a wasted opportunity to have a creature that is essentially just a large wolf when you could have something far more unique and terrifying. Even classics in the genre like An American Werewolf in London, The Howling, and Dog Soldiers don't get my blood pumping, so I thought there wouldn't be much chance of this indie horror making much of an impression, and sadly it doesn't, despite some occasional good ideas, and some cliche busting moments.

London couple Dave (Ben Loyd-Holmes - Torchwood) and Abi (Atlanta Johnson) have headed out into the country for a romantic weekend at a cottage they have rented from farmer Sam (Gregory Cox). Dave craving commitment in what was meant to be a simple fling had planned the trip so that he could propose, however the couple soon discover there is some sort of creature prowling around outside the property, something that wants to kill them, and that may be getting assistance from an unlikely source.

I would say one of the biggest problems with Carnivore is that it becomes a little bit boring, the majority of the film is the cat and mouse game they play with the werewolf. While they are safe in the house there are plenty of plot reasons given for them constantly leaving, whether it be lack of phone signal, trying to get to a nearby car, or needing to turn the circuit breaker back on. I did like that the cottage is so tiny, and that the vast majority of the movie takes place in and around this location with a small but competent cast. This gave a claustrophobic feeling that was helped by plenty of close up camera angles that follow the two as they move around. I also liked that this felt almost real time in how it plays out, it isn't at all, but the progression over the course of one evening felt smoothly done with events progressing rapidly.

I didn't like the main two protagonists really, there was a bit of an old fashioned vibe to their relationship that seemed a little outdated in modern day. Dave is a muscly assertive guy, but one who is prone to getting aggressive and short tempered under pressure. Meanwhile Abi isn't the typical useless screaming damsel in distress, but has a nasty habit of clinging to Dave like glue whenever she feels threatened, and meekly trying to make him feel better. In a way these characters were nearly as bad as each other, and these flaws did find it hard to want to root for them. There was no sense of backstory or development to these two, it was like a slice out of time so there was no real idea of what sort of people they were, other than being in a passionate relationship. They also get to share two awkward sex scenes together, the first was bad enough when they were fully clothed, but then around ten minutes later we are 'treated' to a second more explicit one with plenty of Dave's backside on show. These were perhaps the most hard to watch scenes of the whole movie. The characters flaws are best shown in a scene where Abi drops a mobile phone after nearly being sliced open by the werewolf, Dave responds by angrily admonishing her for dropping the phone rather than showing any kind of worry for her! 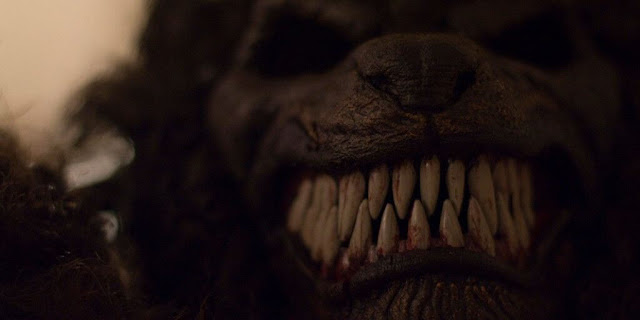 The werewolf is kept in shadow and barely glimpsed for a lot of Carnivore. It is well established that barely showing your movie monster builds up its fear factor in the minds of the viewers. It is a shame then that when we do get to see it in all its glory it just looks like a man in a cartoony looking werewolf costume, I kid you not, at one point I honestly believed there would be a plot twist that it really was just was a man wearing a costume. Obviously this takes away from the immersion, it does look nice enough on occasion, during chases in the woods for instance, but when it is in brightly lit locations (such as the cottage it is constantly invading) it looks pretty terrible.  To be fair to the guy playing the werewolf he does move around in a beast like fashion. Effects for the most part are functional, some nice blood effects later on, and a great looking mid-transformation effect, it was good that CGI is only really ever used for blood spurts.

There are some decent moments peppered throughout this, such as the turning around of cliche movie moments. At one point Dave dramatically throws his lighter into the cottage after turning on the gas on the oven a few minutes previously. There is a nice shot of the house with the expectation of it dramatically exploding but nothing happens, later on another character even comments "someone left the gas on?". Was a pretty funny moment. These cliche dissolving moments also come with a couple of times when the heroes spurt out clever one liners just before they go in for a kill, but then get disturbed by something else and don't carry out the finishing blow. While the finale felt a bit rushed to me it actually wasn't bad, I liked the flip around of expectations, the film hinting at plot developments for one character, only for it to then happen to the other one. 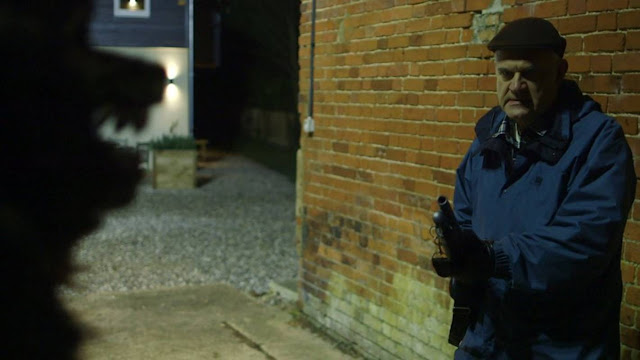 Admittedly this was never going to be a film I loved purely for the fact that for whatever reason werewolves turn me cold. While I liked the small cast and tiny location I felt this sometimes took itself a little too seriously, the small elements of humour came across quite well. The middle might drag a bit but I did like where this ended up going, some surprising turns. It is filmed competently with a crisp clean picture, but never comes to feel anything that is either scary, or really thrilling. Carnivore: Werewolf of London is due to come out in the UK on 30th July thanks to the great people at High Fliers Films.