An Idle Mind is the Devil's Playground (2016) - Horror Film Review 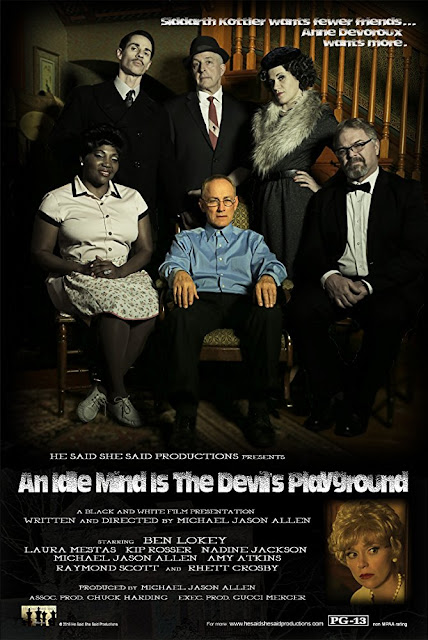 An Idle Mind is the Devil's Playground is an obvious homage to the style of The Twilight Zone, in fact it even has the endorsement of Spats White who was a friend and collaborator of Rod Serling who created that show. What works best for this film is that despite being made in 2016 it looks to all intents and purposes like a lost TV episode from the 1960's.

Reclusive Sid Kottler (Ben Lokey - Michael Jackson's Thriller) is a long term shut-in who has a severe case of anthrophobia (a fear of people or human contact). One day he awakens from a dream and is shocked to discover a man he had just dreamt about sitting in his bedroom. Thinking he is still dreaming he goes back to sleep, however he soon finds out that each time he awakens the person he was dreaming about has manifested in his house, and soon Sid finds himself in his own personal hell with a house full of strangers... 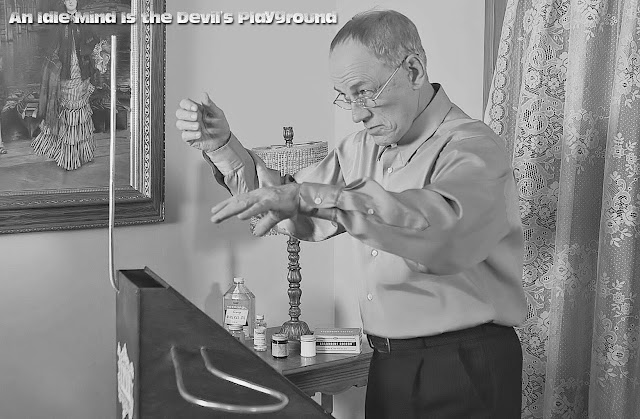 The pacing and style of acting in Devil's Playground is very reminiscent of the time period it is aping, it really did feel like a lost episode of The Twilight Zone which is no bad thing as I love that show. I couldn't get over how authentic this felt, even after watching the end credits I felt that this couldn't have been created in modern day, aside from the smooth directing! Everything from the costumes to set dressing and even the style of film work just felt like something out of time, all wonderful stuff, and of course this was shot in black and white to complete that feel.

There is a very surreal vibe going on here with it more often than not feeling creepy due to this bizarre situation the main character finds himself in. This is helped by frequent cutaways to Sid dreaming, whether he is trying to talk down a man off a bridge, dancing with a beautiful woman, or finding himself as a child at a playground the weirdness just keeps constant. It threatened at times to overwhelm the actual plot a bit, as much as I liked the scenes where characters are literally just pointing at Sid and laughing it felt a bit random occasionally, though also like a sketch from The League of Gentlemen. In a strange way this felt like it was almost a de-make of last years Mother!, it shares similarities in that the main character has a fear of strangers yet finds themselves increasingly surrounded by more and more uninvited house guests. 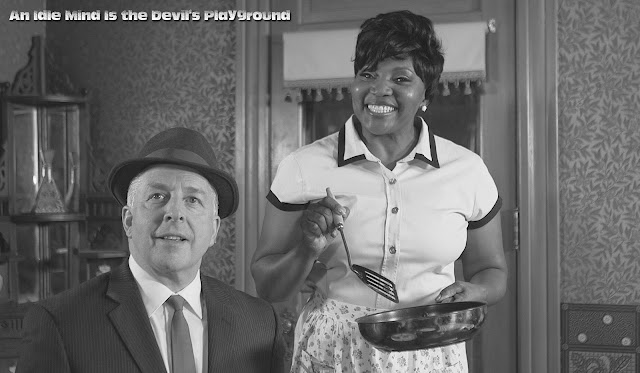 This is horror in the old sense, there isn't really anything implicitly horrifying, yet there is a slow burning bit of dread that is helped massively by the creepy as hell soundtrack that feeds a lot into the film itself as Sid is a musician who plays this weird instrument that consists of wires coming out a box. It has a mournful sound that a side character; new next door neighbour Anne Devoroux (Laura Mestas) describes as 'an opera singer crying'. All the actors gave performances that fitted the tone well, and Michael Jason Allen who also wrote and directed this has a part and he fits in very well, playing the mysterious Mr. Snatas with the creepy laugh. It was good to see even the child actors worked well, though the couple with the brief inclusion in the real world segment didn't add much, would have been better if they had stayed in their dream.

I was worried that the mystery of what was going on wouldn't be wrapped up very neatly. There were a few different explanations, the most plausible revolving around the medicine Sid was taking for a mental condition he suffered. The suggestion of Sid being in a sort of Hell was a neat inclusion, but it never seemed to be a serious suggestion as little of the plot was geared towards that. Due to this feeling so similar to The Twilight Zone I did really miss Devil's Playground having a similar style of introduction and ending, with the credits in particular while they were perfect for this (combining the credits and on going film together) I would have loved to have a sardonic voice over closing things up. 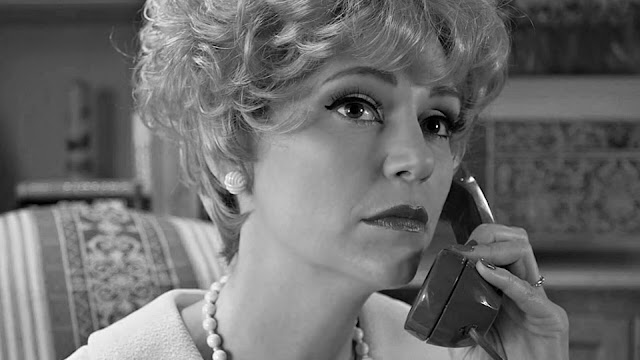 This was a great little movie that at an hour long was the perfect length, any more and I feel it may have started to drag, but as it is there is just enough going on to keep you entertained. I haven't seen anything like this for a long time, people wanting a more modern take on horror could well be disappointed with the lack of thrills, I loved this though, it was a real pleasure to watch. An Idle Mind is the Devil's Playground is out now on VOD thanks to Reel Nightmare Films and the Together Magic Film Group. In USA/UK it's on Amazon Prime Video, while it is available worldwide on Vimeo on Demand, it's also coming to DVD very soon.