When I first decided to review Wulverblade I felt like I was being a bit cheeky as it seemed at first glance to have nothing whatsoever to do with horror. However I have a real soft spot for scrolling beat-em-ups and so I found it too hard an opportunity to turn down. I fully intended to come up with some lame way to link it to the horror genre all the way up to the final level, when to my surprise an element of genuine horror does appear.

I like history so I was pleased to discover that as far as it is able Wulverblade aims to ride alongside actual events that took place. It takes place in Britannia (now Britain) around 120 A.D and has you as one of three members of the northern tribe of the Caledonii: Caradoc (all rounder), Brennus (strong but slow) or Guinevere (fast but weak) as you battle the invading Roman army, specifically the 9th Legion. Over eight levels you have to battle hostile tribes and Roman soldiers in order to try to repel the unstoppable forces from taking over your land. 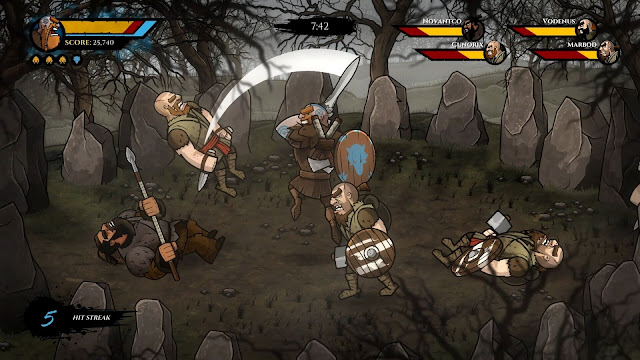 The graphics for this are very charming, cartoon like and bright, yet that doesn't take away from the blood and violence. It isn't too long into fighting your first few foes when you realise that sometimes upon death enemies will leave behind limbs, or even their heads for you to pick up and use as a projectile. Enemies also drop an assortment of weapons that can also be flung at others, these include hammers, daggers and even javelins, obviously these all do more damage than body parts but nothing beats throwing heads! Crates and pots dotted around the levels also can contain throwables, as well as coins, rings, special weapons and notes. The notes are the most interesting thing here in terms of history weapons. Get to a specific part of a level, encounter a specific new enemy type, or collect a super weapon or note and you get to read either a brief little bit of history or myth revolving around Britannia. These were all fascinating to read, especially the ones that also contain photos of ruins visited for research while making Wulverblade. Getting a bit of behind the scenes info is not only interesting in its own right but shows that the team making this were committed to trying to be as accurate as possible.

So how does this rate compared to other scrolling fighters? In terms of look this resembles Castle Crashers as both have a very cartoony vibe going on, in terms of actual action this couldn't help but remind me of an Asterix scrolling beat-em-up I played in the arcades as a child. The game has you going in a typical left to right fashion with your character able to wander up and down the screen. Occasionally you will be funnelled into a section that is pure 2D, such as working your way through a cave system, or walking along a Roman rampart. These sections blend seamlessly with the 3D sections and feel appropriate. Staying in line with historical accuracy many of the enemies you fight aren't actually Romans, but instead collaborators. As you progress over the 8 stages the Romans you probably have in mind make more and more of an appearance. Enemy types are quite varied with there being a variety of armed foes such as quick hooded figures who throw knives, the grunts made up of burly warriors, and heavily armoured Romans who deflect your attacks with their shields. As is the way each stage ends in a boss fight but there is some variation that was nice to see. Many of the bosses are huge foes, but a few offer something a little different. One for example has you fighting a nimble bow user, another has a Roman tower as the actual boss, once it has been destroyed you win the level, but are attacked by infinite enemies as you do so. 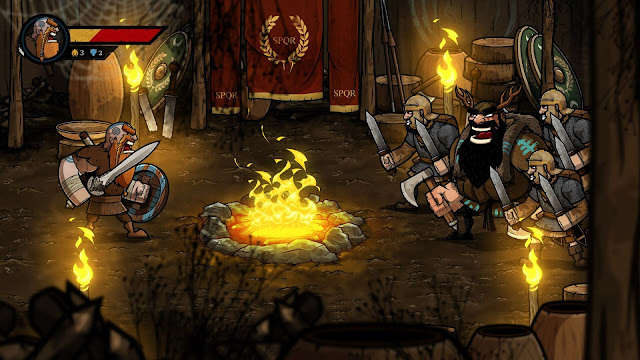 The levels fitting with realism aren't too dramatically different from each other, you get plenty of woods and encampments to fight through. I felt it was a shame that two of the levels felt pretty identical in that both had you attacking a Roman watch tower. The second of these really stood out though due to beautiful stages of you and the enemies as black silhouettes fighting in bright locations. Towards the end it feels like you are getting to a resolution with a Roman fort at the penultimate level feeling like the typical big bad final location. With this though I found the music a bit of a let down, it feels appropriate for the setting but it didn't sound grand or thrilling, not really memorable at all.

The controls are simple enough, you can dash by double tapping left or right, you have a block button and can roll by double tapping block. For the most part you only have access to one attack button, you are able to pick up limited use weapons that function as a heavy attack, and you have a jump as well, I would have preferred to have a constant heavy attack option as often times it felt a little bit repetitive. Once your rage meter is full you get a limited time where you are invincible, that was nice, as was the once per level special ability that lets you summon a pack of wolves to attack all enemies on screen. I found the block and dodge abilities both to be pretty useless with the character on screen being slow to react to button presses meaning even when it was extremely obvious an enemy was going to hit you it was pretty impossible to actually do anything about it. 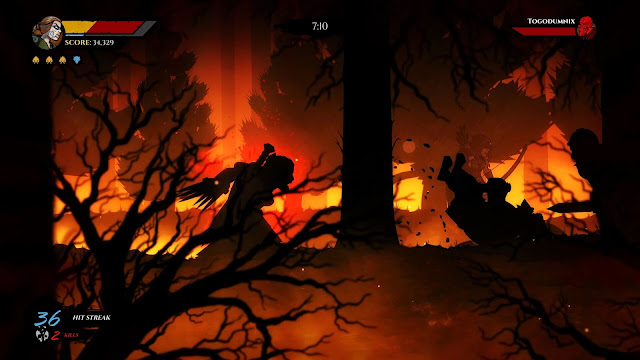 I played the game in single player, though this can be played with up to 2 players. I found it fine enough going, just a couple of occasions with bosses in particular where I felt it was a little unfair. I never got bored playing this, aside from the too familiar feel to the end of the two watch tower levels. Something happens mid way through the final stage that changes up the gameplay a little bit by introducing many more enemies on screen at once, but also granting you more strength with which to battle these. That was a nice touch, though felt a little bit like it was something from a different game.

I have got through this review of Wulverblade without actually mentioning the horror aspect, yet I think it is tied into the plot too tightly for me to ruin what happens. Most of this game is brutal (in a charming colourful way) yet normal, so this change was pretty cool and had me grinning. In terms of replay the three different characters play differently to each other, there are also a few different modes that include arena style fighting against hordes, as well as the base game, arcade mode (that restricts continues) and another mode which was locked but looked like it would put the late game twist as an option for the entire game. There are also a load of extras unlocked that include little videos as well as artwork for the game. 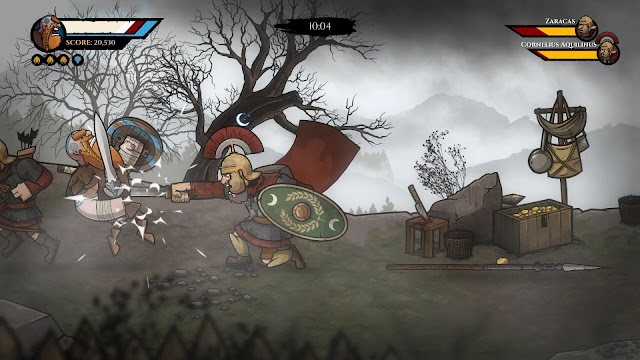 There is a lot of love put into this game, I got the sense there was passion for the topic. In terms of the history I loved this, I haven't really seen anything about this time period (aside from in Ryse: Son of Rome). In terms of a fighting game I found the bloody combat quite addictive, I loved the cutscenes that added a lot of character, and the great graphics, but the music was at best forgettable and I found the levels to feel a bit samey. Still I had some fun with this and especially if you have a friend to play this with it is well worth a go (add on another zombie head if your planning on playing this in co-op).

I have actually had a chance to play this in co-op and I stand by what I said; to add on another head if your playing with someone. The game compensates for double the players by increasing the amount of enemies which is a good thing. It has a function whereby if one character should lose their 3 lives then they are able to steal a life off the other player which can be useful. We did find on occasion when the screen got full that it was hard to see yourself on screen, we both lost our characters at least a couple of times, an icon above player heads would fix that. One last thing I noticed that the Beast mode is now active, though haven't tried it yet. I imagine it is just the whole game as the special ability from level 8.

Posted by Daniel Simmonds at 14:48