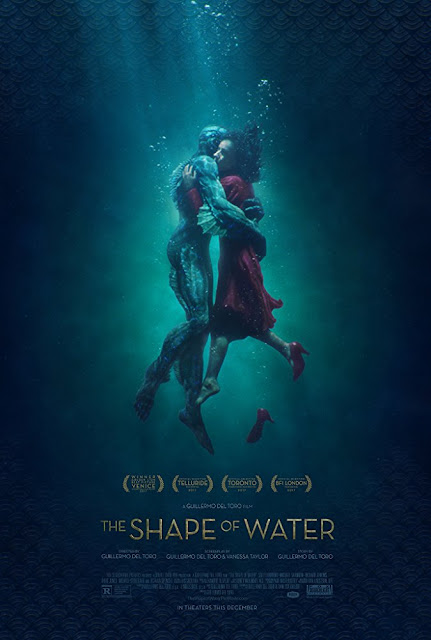 When I first heard about The Shape of Water on a podcast it didn't really appeal to me. From what I gathered it was like a re-telling of the Creature from the Black Lagoon though set in the modern day. It isn't either of those things, though I can see what they meant by the former comparison. I was tired after a long day and not really in the mood for the cinema but I made an effort to go anyway for this blog, but I don't know why, but lately I am not that keen on soppy films. Regardless of my thoughts on the meat of this film, this is a film that is full of fantastic editing and performances, it was an early pleasure to realise this was directed by Guillermo del Toro (Pan's Labyrinth, The Devil's Backbone).

Set during the 1960's this tells the story of a mute cleaning lady; Elisa (Sally Hawkins) who works at a top secret research facility. She discovers that a fish like creature (Doug Jones - Pan's Labyrinth, Ouija: Origin of Evil) is being held captive there and ends up befriending it. Realising its life may be in danger she hatches a plan to free it... 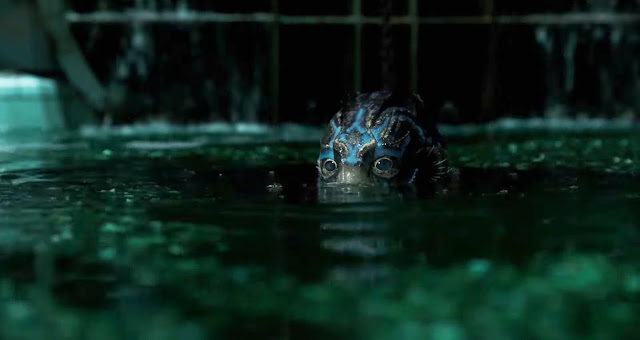 While there are horror elements to this it is very much more of a fairytale. Many of del Toro's films are like that, but this is more light than most his work with this feeling very twee and innocent, rather than dark and gloomy. This goes full on with the fairytale element with it even opening and closing with a narrator. This becomes a twisted love story and that aspect I found hardest to get on board with, especially when elements such as a song number appears that features a dreaming Elisa dancing on a stage with the merman creature, and some awkward sex scenes with the monster. It makes use of the 60's setting to portray the ugliness and double standards of the rampant racism and homophobia in that era, it was good that was highlighted rather than ignored, and in fact has parallels with how the creature itself is treated by those around it.

Despite the light feel to this when it needs to this doesn't shy on blood and violence, there are a few scenes of nudity, while the language is strong throughout. This is best displayed with Richard Strickland (Michael Shannon - Man of Steel) who plays a fantastic bad guy who has a strange sense of charisma and power to his scenes, and in a very small way is relatable. I had no complaints with any of the acting here, Hawkins was great as a mute character, with real power in her sign language due to the emotions she shows on her face. Her best friends Zelda (Octavia Spencer) and Giles (Richard Jenkins - Let Me In) worked so well on screen with her, even side characters such as Michael Stuhlbarg's Dr. Hoffstetler were very good. 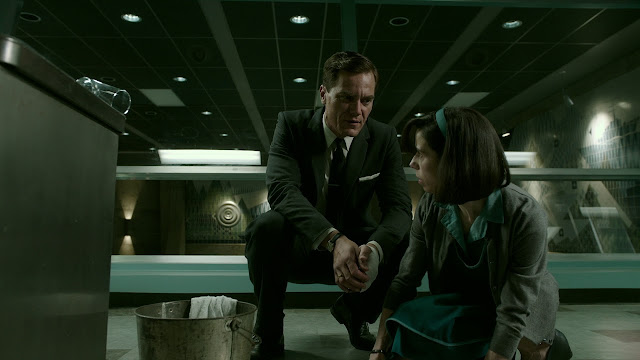 If it wasn't for the actual plot itself this would have been a wonderful film for me, everything about it is so polished, so well crafted and put together. From the awesome looking intro of an underwater apartment slowly turning into a regular one, the love scene in the bathroom with the water dripping into the theatre, the stunning rain scenes, even the edited scenes of Elisa's daily routine, all of it is a work of real art. The sound design was on point, especially the piercing noise of gunshots, and I love that at one point a character is whistling in time to the soundtrack. The special effects for brutal violence were as great as in any of del Toro's other films, favourite one being a huge plank of wood rammed into someone's face end first! Finally the merman design was very good, the effects of the creature never made it look anything short of realistic. Going back to the actual story though there really isn't too much to it, there were no real surprises anywhere with the finale in particular feeling very predictable in how it all plays out.

There isn't really much more to say with The Shape of Water, it is a wonderfully directed beautiful piece of film with some fantastic acting, yet I just wasn't in the mood for a love story, even one between a human woman and a fish monster. It isn't for me, but I am not going to hold a grudge against anyone who proclaims this to be fantastic.