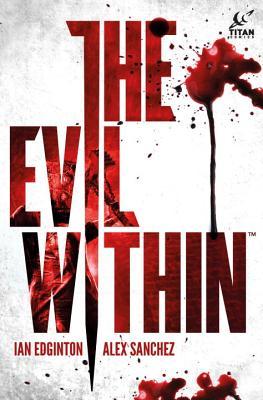 The Evil Within graphic novel is made up of the four issues of the comic run that was released as a prologue to the game of the same name. For some reason I thought this was going to be an actual novel, but a graphic novel is fine by me also. In the past comic book adaptations of video games never works out too well. I would say the closest comparison for this is the Silent Hill series of graphic novels. While they look awesome and are enjoyable I always found the schizophrenic art style and the way the stories were set out just led to a sense of frustration. With The Evil Within we get a self contained story that is well set out and which looks great.

Dana Robinson was on a long car journey when her vehicle breaks down in the middle of a rainy night. She heads to a diner to get assistance but instead finds a bunch of zombie like humans who give chase. She teams up with a guy she meets and later they meet up with a couple of others. For whatever reason they realise they are in some sort of a nightmare world full of monsters and traps that are out to kill them. They are all guilty of perceived crimes and it seems this world is intent on punishing them for their past mistakes... 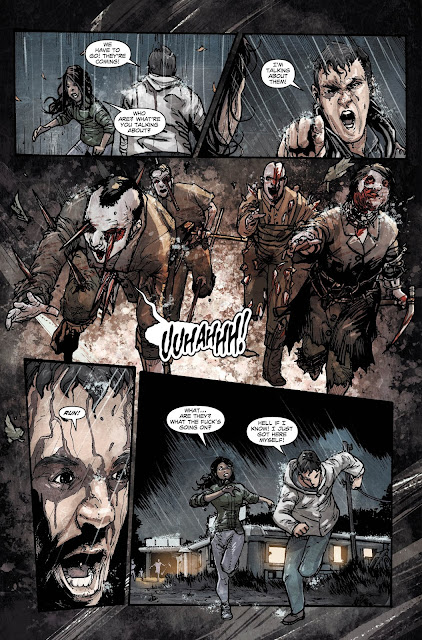 The Evil Within straddles a fine line between fan service and telling a cohesive story. This fan service comes mainly from the boss monsters that appear, all the bosses from the game make an appearance at one point or another with each issue of the comic introducing another iconic monster to hound the survivors. It is hard to be too annoyed at this recycling due to several factors. The first being that the shared dream world contains the memories of all who have inhabited it, so much like the game itself it makes sense that the stronger memories would manifest. Secondly The Evil Within 2 also saw fit to repurpose these foes, and they are iconic so I liked their inclusion however lazy it may seem.

I liked how relatively simple the plot actually was, the way Dana had visions of the crimes her group have carried out in the past saved on needless exposition from them and kept the plot moving forward. It was also good that these characters head to areas specific to themselves, there is no recycling of environments from the game itself, while areas are still full of traps that remind me of the game world. I also thought the artwork was effective and fitting throughout, this needed to be a dark grimy world and it is, though the art is more simple than the stylized Silent Hill art and so it is clearer to follow the events. I did have an issue with the sound effects though, not only are they giant, but the words used to describe the sound is pretty ridiculous. Choosing a two page spread at random we have 'shunkk', 'thukk', 'skkrangg' and 'skrakk' used to describe a large pylon buckling under weight. These descriptions stick out for the wrong reasons rather than add atmosphere to the panels. 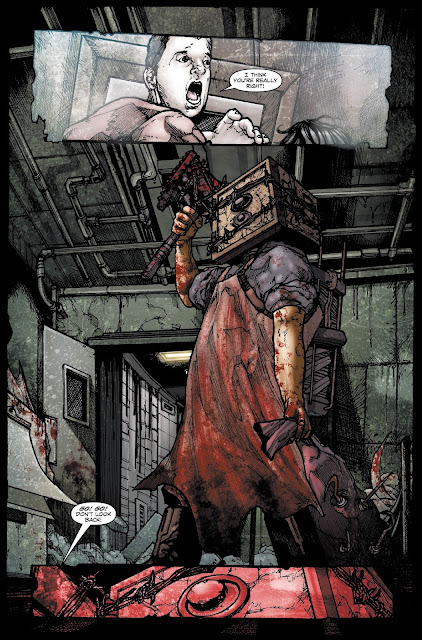 The Evil Within is one of the better comic book adaptations that I have read. While the plot turns out to be pretty empty and pointless adding nothing to the games it was still a solid little story clearly told. Truth be told this did its job, it was enjoyable to read, that's all there is to say really, and that's no bad thing.

Posted by Daniel Simmonds at 03:46