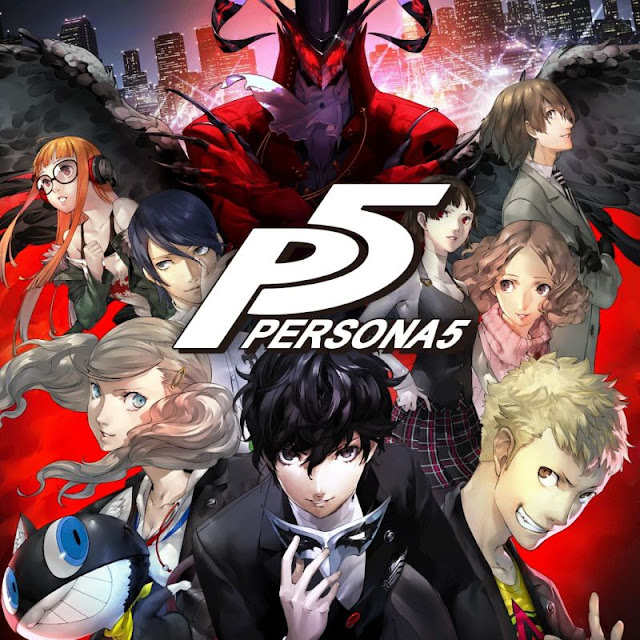 For reasons that baffle me to this very day (and which haunt my nights) I decided to review Persona 4 after only 24 hours playtime back in 2010. I think I must have assumed I was near the end, however it was actually 91 hours long. I would like to think I'm more professional nowadays and so for this review of Persona 5 I have actually completed it first! It took me a whole year to finish this RPG, clocking in with a game time of 97 hours.

Persona 5 starts with your school age character (knick named Joker) being arrested whilst in the middle of a daring casino robbery as part of a group known as the Phantom Thieves. He is taken away to an interrogation room where he is asked to recount his version of events leading up to his capture. A large chunk of the game is a playable recollection of events. Joker arrives in Tokyo to stay with a coffee shop owner Sojiro, due to being on probation after having been charged with assault. Him and his new friends through a series of events unlock 'personas' which are manifestations of their inner psyche. They also gain the ability to enter 'palaces' which are in a supernatural realm and which are twisted versions of the palace owners mindset. Basically kind of like Inception; by going into a mind palace and stealing the treasure located there they are able to 'steal the heart' of their target which results in them developing a conscience and admitting their crimes in the real world. However the more they change people to better help society the more they find their actions become investigated by the police and government and soon find themselves with danger of arrest... 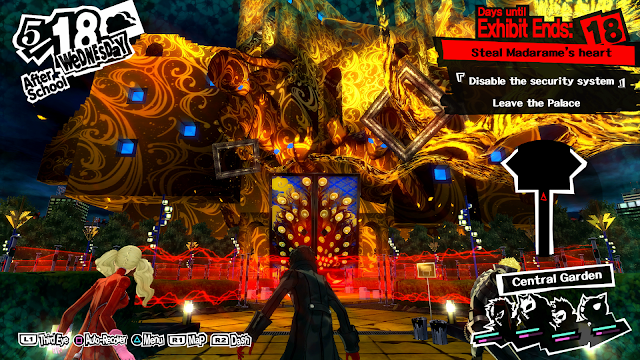 I loved Persona 4, and I love Persona 5 but I don't think story wise it is as much of a draw. Early on we are introduced to the antagonist and so there is none of the mystery and surprise that came with Persona 4's hunting a serial killer storyline. Instead over the course of a year you go after different targets, starting with a teacher who abused his position to sexually harass students, you end up going after business leaders and politicians. As you do so your fame increases with public opinion constantly spurring you on to further actions.

Much like all the Persona games there is a cycle. During the day you attend school, then after school you are able to do a whole host of things. You can go to a diner for instance, or study in the school library, even take on a part time job to give you extra money. You can also enter Mementos which is a procedurally generated dungeon where side quests can be taken on. Then if it is the time of year when you are after a target you can enter their palace which takes the form of a more involved dungeon and try and complete that. Also in the real world you are able to hang out with confidants. These people grant you more abilities the more you spend time with them, these abilities range from being able to swap out team members during battles, to cheaper healing items, experience points being equal even if characters are not in the line-up etc. 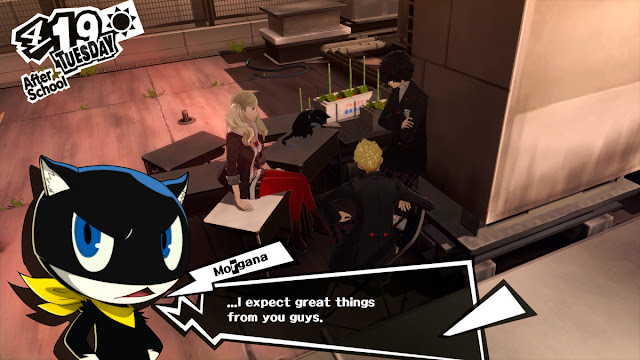 Persona 4 had procedurally generated dungeons for the main missions so it was a nice change to see complex dungeons appear for the seven or so main missions. These all are based on locations a thief would steal from, and so as well as a casino you also have places such as a bank, an art gallery, a cruise liner, and even an ancient Egyptian pyramid. I loved these main dungeons and it was nice that there were mild puzzles to them, not just an aim to kill everything inside. It was also nice how they fed back into the personalities of the owners of them. First dungeon for example has the teacher as the King of a medieval castle, in his palace all the students have taken on the role of slaves.

The characters who join you are a varied lot and all based on outsiders from society. The protagonist is a literal outsider having come to the area from outside, then you have Ryuji who is the typical rebel character, Yusuke the troubled artist, Futaba the shut-in, Makoto the teacher's pet as examples. Each character (aside from the main one) has a Persona based on a particular element, so Haru is strong in psychic attacks, Ann with fire, Morgana with wind for example. In battle usually an enemy is weak to a particular element, hit them with their weakness and they get knocked down leading to the option to perform a powerful attack. While magic costs points it is the best way to kill enemies as often removes them before they get to attack. Enemies appear in the levels rather than random battles, there is a stealth element championed that encourages you to sneak up on them so that you get a round of attacks before they get a turn. There are also a bunch of bosses to fight, these are all memorable and crazy. All these fights are turn based and so there is never the feeling of having to rush. 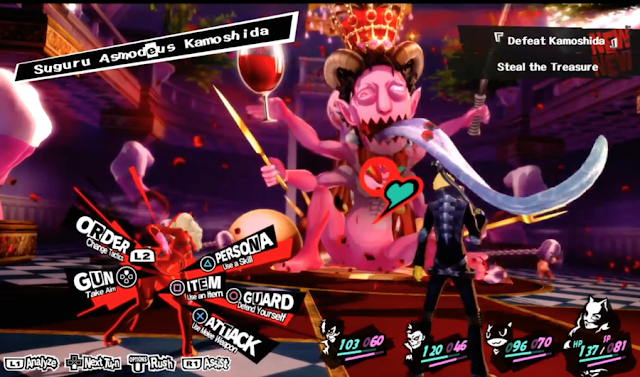 There are horror elements here for sure, but generally this a game far more about adventure. The plot of random people getting mental shut downs and going berserk was pretty interesting and gave you good incentive for your actions, but I found the later storyline to be a bit plain and obvious, even if the finale goes back to insanity. There is an analysis of adults as being untrustworthy, and this is matched with the sometimes pretty mature storylines. Going back to the teacher part for instance it is implied he has raped students, leading one to try and kill herself. Elements such as this prop up at several points with the game not afraid to go to some pretty dark places at times. This is all backed up by some fantastic music, great voice acting, anime cutscenes, and some of the most stylish design choices I have ever seen in a game. Everything from menu screens to the HUD during the game looks so cool and is a joy to work with.

Persona 5 was a game I expected would be great and it really was. While it didn't have the impact that Persona 4 had (that being the first game in the series I played) this was still an amazing game that constantly pleases in the smooth way it plays out. It is never hard, but you always need to be paying attention. While the story wasn't as interesting it fitted well over the near 100 hours leading me always wanting to see the next storybeat. If you love RPGs then this is an essential game to play, the modern day Tokyo setting sets it apart from the traditional fantasy based ones of the genre, while the characters are all a likable bunch.