The Hideaway is the second of three planned DLC levels for horror platformer Little Nightmares. I've realised my problem with the DLC packs so far is that I merely thought the main game was good, but I never loved it, I didn't care much about the story it was telling and I found the platform and puzzle parts to be an exercise in frustration. The first DLC titled The Depths I found to also be quite frustrating due to the amount of cheap deaths encountered. This time around it is much harder to die but the frustration was still there. Minor spoiler for DLC 1 to follow...

Having been captured by the janitor at the end of the first DLC this one begins with you quickly escaping and finding yourself on the janitors home turf of the boiler room. It also happens to be the home of the gnomes; neutral creatures that are scared of you. Earning their trust is the key to escaping this place and continuing your quest to escape The Maw (a giant floating fortress). 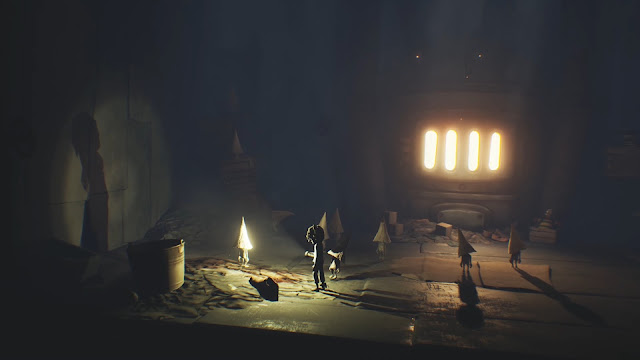 The Depths further explored the puzzles and situations involving water, this one is based around utilising nomes to assist you in pushing items and pulling switches. The main mission here is to gather together enough of the creatures to power up the main boiler which is your key to escaping. To do this you have to explore many many dingy rooms to locate enough nomes to help you. The puzzles don't get much more complex than throwing the little guys around, I only got stumped at one point and that was due to them frequently getting stuck behind objects.

I don't remember the rest of the game being as dark and dank as this level. It felt like the majority of my time I was stumbling around in the dark trying to work out where I was meant to be going next. You have a torch but it is pretty useless as if you walk into an object, try to climb something, or pick something up your torch automatically goes out which became quite annoying. Also an issue I had was that the game doesn't tell you the controls, it assumes you already know them from before. They are simple enough to re-learn but it would have been nice to have a quick reminder. 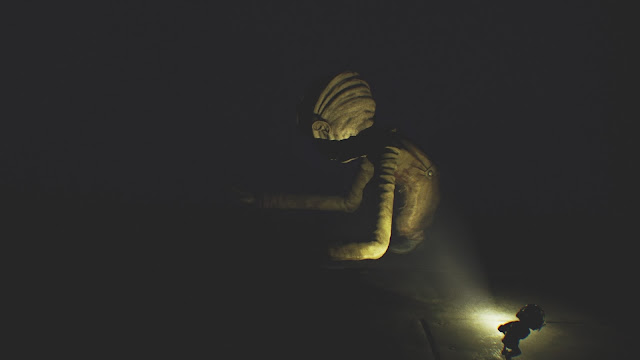 I don't know if it was due to the darkness, or the simple puzzles but I found my time with The Hideaway to be a pretty bland affair. It was just a collection of dull looking rooms that didn't reveal any further details about The Maw, I liked the interactions with the nomes but there was no revelations there either. The Depths had its own original boss enemy stalking you, here that is just the janitor monster again, someone that I knew exactly how to deal with from my time against him in the main game, so even he wasn't an exciting presence.

The third and final DLC is due sometime this month, I will play it as soon as I am able, but I just hope they do something to inject some excitement back into things as more of the same just isn't cutting it.