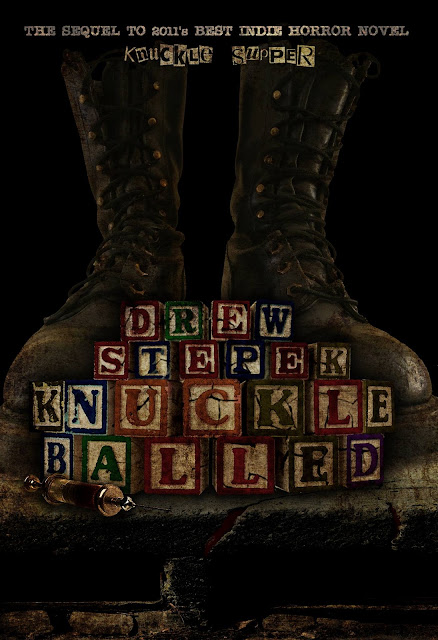 I was very impressed with Knuckle Supper; the first book in the Knuckle series when I read it towards the end of last year. The whole slimy, degenerate world was so well realised and concise in the way it was described. Add to that an anti hero who was equal parts awesome and flawed, a slew of unique characters, and some out-there plot twists and you had a book that was a riot to read. Knuckle Balled is the sequel to that, and interestingly becomes a sequel specifically to Supper's epilogue rather than following the loose plot threads hanging from the main story of that first novel. Spoilers for Supper are unavoidable here.

Having murdered Bait's parents at the end of Supper, vampires RJ Reynolds and Eldritch are on the run from the law, mainly due to them having kidnapped Bait's younger sister Paulina as they didn't want to leave her on her own. The trio have arrived in Austin where Eldritch has a plan to hand the young girl over to film star Stephen Rodderick (who also happens to be a vampire) so that he can look after her. However the town, like L.A is full of vampire gangs, and these ones seem intent on killing the two before they get a chance to meet Rodderick.

This time around the scope of the story is far more restrained, it felt like a side story at many points due to not following on with R.J and his desire to get revenge on both Dez and The Habit. The new setting worked well in that like R.J the reader is experiencing the craziness for the first time. It was good to see that he is still a drug addict with Balled at it's very best when he is messed up and getting stuck in surreal situations, such as a huge fight against a possum, and a pack of dogs. A lot of his character development revolves around him having to decide to do the right thing rather than look out for himself as he normally does. Despite his increasing morals it was cool to see him still get into a multitude of ridiculously violent altercations with various gangs. Like in Supper the gangs are all themed, though even more so here with a feeling of The Warriors creeping in, featuring gangs such as ones dressed like old timey silent comics, an all female gang of roller skating vampires, and a degenerate group addicted to a Krokodil style drug that eats away their flesh and makes them resemble zombies.

There are plenty of ties to what has come before though I am glad I came into this one having read the previous. It is easy enough to infer from dialogue, as well as the over the top nightmarish dreams R.J has of what has happened previously, but it certainly adds a lot understanding what has come before. It should be obvious but you're going to want to have read Supper before dipping into this one. I liked how smaller elements of the first book get more screen time (so to speak) here. The Blue Blooded Perrys gang have a much larger impact here, while the weird voice R.J hears in his head that thirsts for heroin has a more pronounced presence. It seemed the whole origin story of the vampires had been fully explored, but there is some more revealing information about that here.

Balled is at it's best when it allows R.J to just roll around getting into insane situations, the whole rescuing Paulina main thread was noble enough but this time around Eldritch felt like a bit of a drag. His aim to look after Paulina blands him out a bit as he becomes a one note nagger who just seems to be there to reprimand R.J and not really do much else, until the finale when once again he goes all action which was pretty great. Again with the rest of the books cast we have a band of unique feeling characters who fit so smoothly into the books universe. I loved the change in setting, and the frequent hilarious stranger interactions R.J has. Stepek is again on form with his descriptions, one that stuck in the mind was something about a severed head leading down into a cavern of blood and bones, quite clever.

Knuckle Balled was another great entry in the series, it had less of an impact though, I suspect that is mainly due to being familiar with the feel and so I wasn't taken by surprise. I expected this would be a great book and it was, it is more of the beautiful same. R.J is a pretty awesome lead due to how flawed he is, yet I love how his scuminess adds to his character rather than makes him someone off putting. There is already a third book being written so I look forward to that time I once again am able to dip a toe into this gross and despicable world.