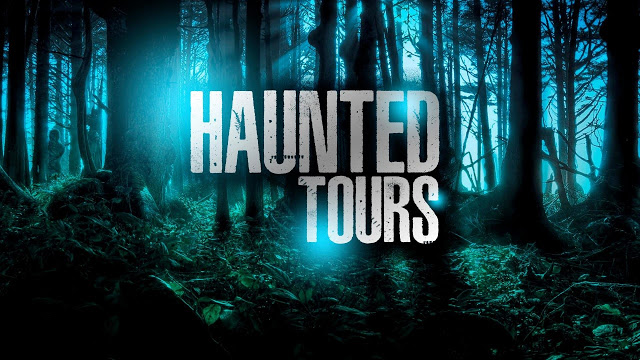 In June of last year I first mentioned the paranormal investigation reality TV show Haunted Tours. I have seen quite a few of these shows in the past and usually not a lot happens in them, they are overproduced with tacky recreations and hyperbole. This one promised to be more extreme, but also more real in what it portrays.

The preview episode I watched was the second one in the series and had the group of Stephen Erkintalo (the investigator), Victoria Catherine (the host), Brian and Jake Jalbert (the cameramen), and producers heading to Ashley's Restaurant which is said to be haunted by two different spirits. One of the spirits was meant to be that of a frequent visitor to whatever it used to be in the 1800's who ended up brutally murdered, while another is that of a child who was killed by a train on the nearby railway tracks.

Over the course of the 45 minute episode Erkintalo does his best to get in contact with the spirits using any means necessary short of outright being aggressive to any nearby ghosts. His tools include a Ouija board that allegedly has human ashes and blood smeared on it, a spirit recorder, and using a mirror to try and bring forth spirits into the real world. He seems to be the wild card of the group in the disruptive energy he brings. He comes across as a risk taker designed to antagonise the other crew members with his actions, such as when he tells any spirits present they are welcome to harm the group, or when he decides to lay down on an in-use railway track in an attempt to cajole spirits into interacting with him.

The group dynamic isn't one of firm friends, instead you get the feeling of a unified goal but with different personalities rubbing against each other leading to a feeling of simmering, yet very mild tension. This felt more real due to the swearing the cast do, as well as the avoidance of those cheesy recreations I mentioned earlier. Yet being bare bones (though focusing on the entertaining stuff) not a lot really happens aside from people saying they feel a presence, or the spirit recorder occasionally making noises that could be inferred to be relevant to the case the group are studying. Sill this is all par for the course for these type of shows and I liked how the group keep referring to a previous episode which gives a good sense of flow and cohesion, whilst at the same time indicating that viewers can expect things to get more intense as the show progresses.

Haunted Tours may be going into a crowded market but it has enough to it that it fits in well, and it was nicely edited. Occasionally (at least in this episode) it felt like not enough was going on to maintain interest, but that was only on a couple of occasions. I liked the group dynamic of sceptics and believers as it gave a more balanced look at things, especially with some of the comments made about things they are doing. Haunted Tours is out on Amazon and has had some good reviews, you should check it out if you get the chance.
Posted by Daniel Simmonds at 03:28