The Rotting Zombie's Round-up of Horror News for January 2018 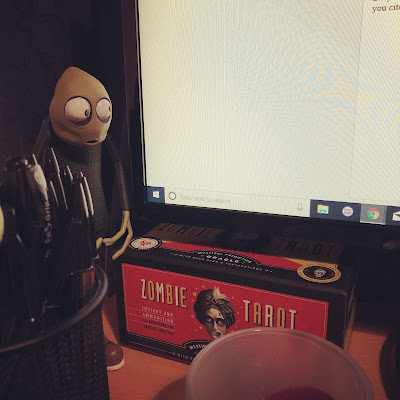 So for 2018 I shall be continuing putting all news items into one post. Back in the day I would dedicate an entire blog post to each item of news, but I am so busy nowadays that that just isn't practical. So this shall be the first news post of the year. Starting off with Shudder news is that season 2 of Jordskott was released on January 18th. I haven't seen the show at all but it sounds like something I would enjoy. In season 2 Eva returns to her old job in Stockholm trying to put the events of season 1 behind her, but the discovery of a mutilated corpse in an icy lake makes her think things are not quite over.

Some late Christmas news first with a trailer for a fake Phantasm holiday special from Darkly Films that uses clips from the film and is based on the Star Wars Christmas special. More than anything this has made me want to watch the Phantasm series again, still haven't got around to watching Phantasm: Ravager.
Also from Darkly Films; they contributed three horror films towards the 2017 15 Second Horror Film Challenge (a post about the top 20 shall be coming in the future). One of their shorts Honest Horror Films: The Basement was selected by Lloyd Kaufman of Troma Entertainment as his #1 film out of all the entries.

The first official teaser trailer for cyber crime psychological thriller The Darkest Nothing: Paraphrenia has been released. This film is about a live video feed streaming out of a website hidden on the dark web in which a psychiatrist uses it to manipulate the viewers. This is apparently the first feature length film in the series, 5 other short movies are going to accompany this as bonus material showing how the live feed came to be. From the teaser it looks like there is some sort of Hostel/Saw type situation going on with victims being filmed for the viewers pleasure. Post production has started, and the shorts will be made available once the main film screens.

Next up comes the news that Dakota Bailey (The Acid Sorcerer, American Scumbags) has released a trailer for his upcoming feature length exploitation film; The Rise and Fall of an American Scumbag. Again going with what he does best this film will feature a bunch of interconnected stories that revolve around drug addicts and degenerates. As the title would suggest this is related to 2016's American Scumbags and features the same cast, including Dakota himself as hitman Johnny and the wheelchair bound Vietnam veteran Wheeling Deals (L.B). No one quite does films like this so will be interesting to see how this turns out.

Last month I reviewed short horror film The Temple of Lilith that was a companion piece to a large short; Sulphur for Leviathan. That film now has a trailer out for it. Director James Quinn refers to this film as "An outcry of anger against the anti-rationalism of the Catholic church". This arthouse short looks pretty cool so maybe one to keep an eye out for.


Next some music news with Australian gothic.industrial hard rock outfit The Creptter Children's new album having been released on January 12th. Asleep With Your Devil EP features five tracks, with one being a new version of their 2016 single Watching You.
Circle of Dust have a new single out in the form of Contagion (Sebastian Komor Remix). The press release says 'Experience glitchy vocals and revamped guitars, while still head banging to the industrial overtones'. This was released January 18th on Spotify, FiXT Store and Bandcamp with it coming to all other digital stores on January 19th.

Finally the fan film Michael Myers versus Jason Voorhees debuted on YouTube on 15th January. The clues in the title as to what this involves. Directed by Mason C. McDonald and starring Jeff Payne as Myers and Dustin Miller as Vorhees.

Posted by Daniel Simmonds at 07:20