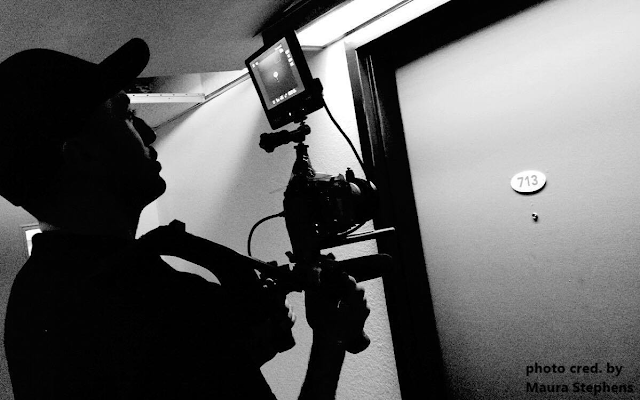 Andrew J.D Robinson is a prolific director responsible for a lot of short horror films, that include among them Placebo, A Walk Home Alone, and Sightings. He has a penchant for making more artful pieces, ones that are executed in interesting ways. He is also the founder/festival programmer for 15 Second Horror Film Challenge which is a nonprofit international filmmaking contest. I interviewed him about the process of making his films and what ideas inspire him as a creator.

First of all can you tell us a little bit about yourself. Why did you decide to make films, what is it about the horror genre that brought you to it?

Filmmaking, for me, is an infusion of all my artistic passions.I decided to make films after my life with the arts evolved towards film. Ever since kindergarten, I always thought I was going to be a Disney cartoonist which evolved into comic book illustration. I'd produce comic strips for my high school classmates that were an amalgamation of everything I loved at the time - Star Wars meets Spawn - where I'd invite classmates to create characters into my superhero universe. Soon after, the family got their first computer and I discovered Newgrounds; an animation community fostering indie creators. This led me to teach myself Macromedia Flash 5 so I could animate cartoons onto Newgrounds. There were viewers able to look past my works' initial crude craft because my strong suit was writing comedy/horror content. As the technical side caught up to the content, I received nine daily Top 5 awards, as far as 2nd place for an episode of mine called 'Brunch of the Dead'.

As my teens continued, I found myself shooting dozens of short films on our family DV tape camcorder with a rag-tag cast made of my sister and friends - skits, faux commercials, and comedy/horror - whether they were for school or outside of. After graduation, I was enrolled to a General Arts College program, however, I dropped out two weeks in after soon discovering that I wanted to be a filmmaker.

In retrospect, drawing and animation were pre-requisite. With filmmaking, I'm able to adopt and explore all of my passions for film whether it's photographic shot composition, storyboarding films, in-camera art direction, VFX post, or conceptually collaborating with FX artists to create horrors. From 2011 and on, my portfolio established myself predominantly as a horror filmmaker. Horror is cinema's Swiss army knife that can draw comedy and drama from. What's tension without moments of levity? What's action without emotional stakes? And how can joy be felt without its struggle against horror? I find the most effective horror movies are a symphony of emotions whereas by the end of it, you could leave the movie with a euphoric feeling along the lines of leaving a fun amusement park ride. That's what draws me to filmmaking and the horror genre - the opportunity to give someone that experience as other filmmakers have for me.

You put out a lot of short horrors, do you have a whole host of ideas waiting to be turned into films, or do you come up with them one at a time?

I never come up with one idea at a time, and could not even if I tried. That's not to say that I cannot focus on the purpose of a singular story. It's very important to be able to reign in all of your ideas, whether it's scenes, subplots, or characters under an umbrella of themes. When it comes to coming up with ideas, I'll indiscriminately write them down. Some begin small and grow, some appear larger that they're meant to be, but all of them have the potential to bring new meaning when I puzzle them together and see what new ideas comes together. Many of my feature-length ideas originally came from experimenting with crossing over ideas into the other.

You appear to have a small stable of actors that appear in quite a few of your films. Do you write parts for particular actors, or is it good fortune that the people you use are able to fit a variety of roles?

I've been fortunate to find actors who have that enigmatic ability to assume characters that are polar opposite from the other. Naturally it comes with practical perks, but more-so I gravitate towards building a working rapport with actors that only time and experience grants. It inspires me to write different shades for staple actors because not only is it thrilling for the actors and myself to see our collaborative process grow new creative dynamics, but myself as a fan of movies I love to see when actors have the opportunity to showcase other sides to them like painters producing new portraits.

Often with a lot of your films a lot of the horror comes from dialogue suggesting events rather than any on screen visuals; such as the radio announcer in A Walk Home Alone, or the phone call in Sightings, these were both pretty effective methods that not a lot of films seem to do. How did you come up with this idea of suggestive terror?

I found myself becoming a student of horror just from sheer passion for the genre growing up. The principles of "less is more" and "the filmmaker cannot create something worse than the audience can for themselves" began to be tools of the trade for me more-so towards my late-twenties. Suggestive terror is not without information; it's information that the filmmaker provides the audience that creates tension. It's certainly worth paraphrasing Hitchcock's bomb theory from his masterclass on suspense:

Imagine two people sitting at a table talking for five minutes, and then suddenly a bomb goes off. The audience is shocked for five seconds. Now, imagine the same two people sitting at a table talking, and the filmmaker shows the audience there's a bomb underneath the table that's going to blow up in five minutes. Now as the scene plays out for the next five minutes, their conversation about baseball or their chicken dinner brings new context as the audience hollers "Stop talking about whatever! Look under the table!" You've now managed to re-engineer the same scene to have five minutes of suspense instead of five seconds of shock.

I find those elements fascinating to play with and my long-hand films will explore that. When done right, it can make for a fun time at the movies!

From beginning to end what is the average amount of time it takes to craft your films from idea to finished product? What is your personal favourite one you have made?

The length of time to craft a film differentiates depending on its needs, but a principle is that I never put a deadline on pre-production when I'm the sole producer. Some films, from ideas to production, can happen in a flash whereas others may wrestle to sync schedules. Once pre-production is complete, I try my hardest to win principal photography as soon as possible because you never know how schedules, over a length of time, may change and conflict. Everyone I work with does not 'do this full time' - we all orchestrate around our day jobs.

My personal favourite would be a 2016 production I had to axe called "The Watcher". The making of the film over the course of summer nights, starred Maura Stephens (A Walk Home Alone) and Aileigh Karson (Something Scary). It's my favourite because of what came out of it: what didn't come out of it was a finished product presentable for the public due on my behalf because I hit a glass ceiling to my DSLR filmmaking know-how - I naively embarked on a low-lit thriller without ever having grasped aperture, shutter speed, ISO, exposure, and in-camera settings. I was shooting it as I would do with a camcorder. I was very happy with the cuts, staging, choreography, and for Maura and I's craft. Initially, when I looked at the noisy blotchy footage in post, it was devastating, however I bounced back to go to YouTube film school and learning low-lighting.

You either succeed or you learn.

After reigning in on the technical side, I realized the sins of my ways haha. For you filmmakers out there, get ready to cringe: imagine shooting a low-lit scene with an f/stop of 22 with your kit lens zoomed in for most shots while your exposure is cranked up on blast. It was a personal achievement with my 2017 shorts to avenge my loss - "Placebo" and "Sightings" in particular were rematches to low-light filmmaking and they proved my YouTube film school in practice. "The Watcher" is my personal favourite because it was both the end of an era and the beginning of a new one.

Do you watch much horror at all? and what is your favourite scary movie? Going off that who would you cite as your biggest influence on the way you build your films?

I watch a lot of horror. Especially growing up, I'd watch every new movie that came out. Nowadays, I'm more conservative with watching the next new wave of films, because I'm more occupied hunting down titles that have always been on my to-watch queue.

My favourite scary movie would be tough to choose one, and they've changed as I've changed - from Hellraiser, Black Christmas, to Suspiria - but one that's really spoken to me during the past few years now is an Australian mockumentary called "Lake Mungo" that chronicles a family dealing with the grieving loss of their family member. It's a slow-burn that begins to blur the lines between drama and the fantastical, until it coalesces into a fever pitch.

Filmmakers such as Carpenter, Rodriguez, and Corman speak to me with how to build a production - fix it in prep, have a Plan B, get as much as you can on the screen, shoot only what you need, be open to trying new things in post production while always keeping the edit and the audience in mind. Guillermo Del Toro, speaking on Pan's Labyrinth, fought against studio pressures 'to reach a wider audience' by telling the people upstairs that he didn't want a wider audience, he wanted the audience for the movie.

Speaking to Maura she mentioned a film you're working on called Dispatch. Is there any additional details you can give on that one, and do you have any additional films you are thinking about making at the moment?

"Dispatch" is an emergency distress call told solely from the point of view of a dispatcher (Maura Stephens) dealing with a caller (Erin Kiniry) who is experiencing a home invasion. It will be the last stop before completely embarking on our debut feature-film "Shadow People" - a script that I've been carving out for years. For the past year, it's been winning significant strides amidst the many bad drafts I had to get out of me haha but where it's at now, I'm happy that this wasn't a film that I had jumped in too early before honing my craft towards. The plot follows an ensemble of grieving characters investigating the sudden disappearances of loved ones.
Posted by Daniel Simmonds at 11:15