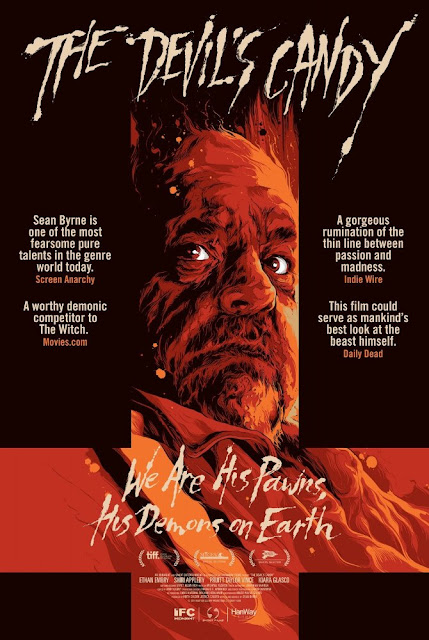 It is that time of year again when the annual Fright Meter Awards finalist have been announced and I find myself playing catch up on the ones I had missed. This year there are six films that I need to see before casting my votes, The Devil's Candy is one of these and is up for a few of the categories including Best Horror Movie, Best Score, Best Actor in a Leading Role (Ethan Embry) and Best Actor in a Supporting Role (Pruitt Taylor Vince).

Struggling painter Jesse Hellman (Embry - The Walking Dead) moves into a new house along with his wife Astrid (Shiri Appleby) and teenage daughter Zooey (Kiara Glasco). The property had been heavily discounted due to the previous owners dying there. Not long after moving in a strange man who appears mentally unwell; Ray (Taylor Vince - Stranger Things, Identity) calls on them saying his parents used to live there. It soon turns out this man hears voices in his head that tells him he has to kill children for the devil, and that he has his sights set on Zooey... 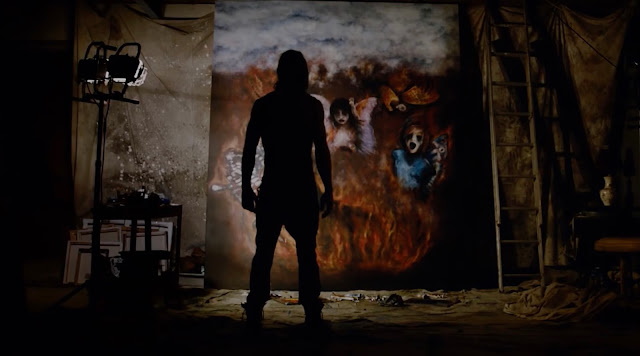 I wasn't completely sure to begin with if I would like The Devil's Candy, but it had an undeniably great soundtrack due to the father and daughter being metalheads. It was strange seeing Embry outside of his role in light hearted comedy Grace and Frankie but I soon came to like his portrayal as a 'cool' dad, the family dynamic worked well here and he gives a good performance as someone who is trying his best by his family but is a bit of a flawed person. It was interesting to see the supernatural used in such a low key way, while Ray is a serial killer it seems the voice he hears telling him to kill are actually real, as it isn't long before Jesse also starts hearing voices, though the ones he hears inspires him to go into a fugue state and unconsciously paint chilling pictures of past victims of the killer. There is a nice atmosphere of unease but this never really comes to the forefront of the movie though the Satanic connections are threaded deeply, not only with the paintings and motives given for characters, but also for clips from TV shows that talk about the origins of the devil throughout history, and religious programs talking about Satan.

The Devil's Candy works as a horror due to the great performances of the small cast, in particular it was Taylor Vince who shined with a role that was played with just the right amount of restraint to avoid Ray becoming a parody. The editing was on form here with some great sequences that were impressive to see stitched together, I particularly liked a scene where Ray is just about to bash in a child's head with a rock, then the scene cuts to Jesse having just painted the screaming child's face onto his canvas back at his studio. The restraint on show for the whole film works well for it, despite going quite over the top at times, though I thought this was pretty cool. The whole finale takes place with a metal soundtrack, but with the flames dancing high and the great lighting this gave the whole sequence the feeling of a album cover in motion. There is some nice direction here, again going towards the action packed finale it all proceeds in such an engaging and addictive way.

While this is a good horror it may be lacking for some expecting more of a visual treat in terms of blood and guts as mostly this is quite restrained. At a run time of 79 minutes it also felt like it could have had a few more scenes to flesh out characters more, especially with Astrid who never really gets to do more than react to events, we never get to see what sort of person she was really like. Also while the exclusion doesn't take anything away it would have been nice to get more back story for the character of Ray, that's just me personally being interested in how the voices all started for him. The Devil's Candy didn't blow me away but it was still a great little horror that I enjoyed every moment with, not one to pass by.

Posted by Daniel Simmonds at 12:37