Stirring is the second film to come from new director Troy Escamilla, after last years Party Night. In the interest of disclosure I should mention that I contributed towards the Kickstarter campaign for this film, and that I know Troy through the Fright Meter Awards committee. As such I won't be putting a score at the end of this review. So Stirring is a Christmas themed horror, following in the great tradition of such classics as Silent Night, Deadly Night and Black Christmas.

A new member of a Sorority house snaps after bullying from one of her new sisters, she brutally murders her bully before taking her own life. Fast forward ten years and Amber (Kaylee Williams); the sister of the murdered girl has joined the same Sorority as a means of dealing with the tragic event. However someone is not happy about this, a new killer wearing the disguise of Mrs Claus has arrived to try and kill her and her friends... 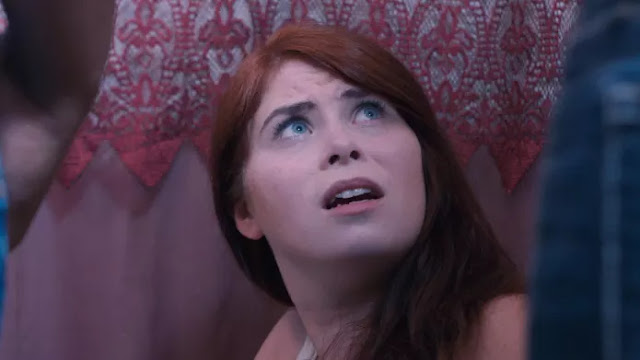 It was only once I sat down to watch this that I realised just how much I had been looking forward to seeing it, the entire film for me was a joy fest. Party Night (that gets a nice reference here) was a decent first effort from Troy, but it seems he has learnt a lot from that one with Stirring feeling tighter and with a more focused script, as well as overall better direction for the cast. It was cool to see quite a few returning actors from Party Night, both Billy Brannigan, Ryan Poole, Drew Shotwell and Lawrence McKinney reappear. Much like the first film it was Shotwell who became my favourite actor, his performance as the stoner Jake was well played, leading to the films most tender scene between him and his female best friend. Elsewhere Poole's turn as jock Grant got the biggest laugh from me when lame Christmas music started playing at a party he was at, he exclaims something like "what the f*ck!?" which is exactly what I had been thinking myself! The star attractions here are Helene Udy (The Dead Zone, My Bloody Valentine) and Brinke Stevens (The Slumber Party Massacre), with Stevens as the campus security officer being the best acted role. This time around the performances felt more consistent, the acting isn't outstanding, but it is satisfying and certainly fits the trashy 80's slasher vibe down to the bone. It was also to good to see another strong female lead with Williams's Amber. I really liked her, she had far more to her than the normal one dimensional character you would expect.

With a slasher it is the kills which are the money shots. One of my problems with Party Night was that the killer was barely in it, and was in general a bit bland. This time around with the killer wearing a grotesque mask and dressed as Mrs Claus it felt more iconic and memorable. This was helped by the murders themselves that were nearly all Christmas themed, favourites being a giant candy cane jammed down a poor victims throat, and a very bloody strangulation involving Christmas lights. The effects are all wonderfully practical ones again and feature Escamilla's trademark use of over the top blood. I loved how insanely bloody some of the murders where, with blood literally dripping off the killers face on at least one occasion. With all this blood I couldn't shake the mental image of the killer post-murder on their hands and knees scrubbing up all the evidence! I guess my only complaint is that sometimes the kills were edited in such a way as to make them seem a little stilted in their execution. 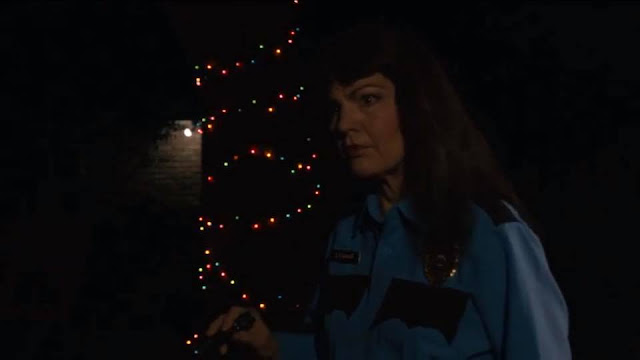 With the story mostly taking place around a party this felt at times pretty similar to Party Night, though I found these characters to be a lot more likable, less bickering amongst themselves for sure. It was funny how lame the party shown in Stirring was, another trademark of the director featuring parties that are embarrassingly dull. I enjoy the fact that even without people dying the event would have been at best forgettable, a nice change from the typical over the top on-screen ones most films show. 95% of the film takes place in the Sorority house for budget reasons I assume, it was nicely decked out with Christmas decorations though and so that added to the tone of the season, this was complemented by the soundtrack with twisted versions of Christmas songs that would play occasionally. The plot was simple, but more involved than the first film with some twists and turns I didn't expect, with more seeming to come even after the end credits have played. Essentially it boils down to a load of characters randomly going off and getting murdered one by one but it was entertaining to watch.

Sure Stirring is another homage to classic slashers but this felt like it had more identity to itself. Obviously it is heavily inspired by Christmas slashers, but Escamilla's growing confidence as a writer and director was clear to see here. I found Stirring to be a fun and bloody slasher that never failed to entertain.
Posted by Daniel Simmonds at 10:39