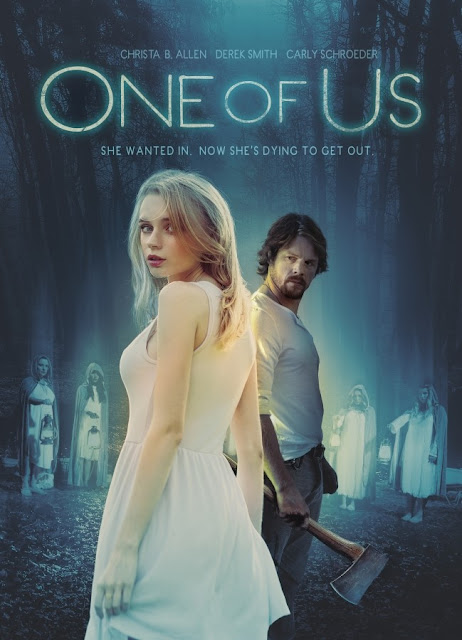 I have one last item left to deal with from before Christmas and then I am up to date with 2017 requests. The penultimate goal of mine was to watch One of Us that was directed and co-written by Blake Reigle. This horror was well made, in fact more so than I had expected, yet I found it was missing that certain spark to make it a great film.

Christa B. Allen (Detention of the Dead) stars as Melanie; an investigative reporter who isn't adverse to taking risks. After getting a worrying message on her phone from an old friend who then disappeared she decides this shall be her next big story. She heads to the last known location of her friend, this happens to be a mountain commune ran by a charismatic man named Brent (Derek Smith). There she infiltrates the group but soon discovers the commune has more the trappings of a cult, and that she may have gotten in over her head... 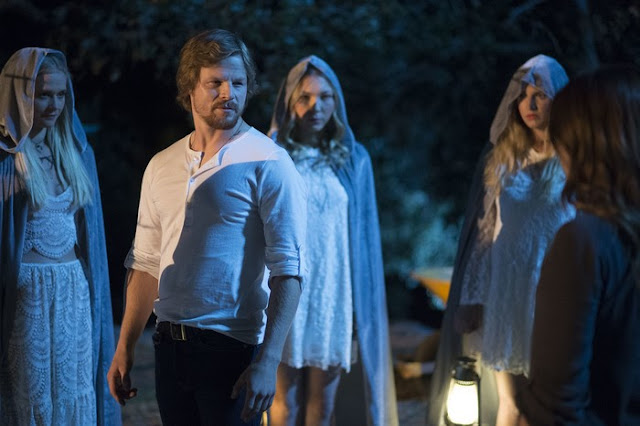 This both reminded me of found footage The Faith Community as well as Tricia Lee's Silent Retreat in that an unsuspecting innocent ends up trapped in a strange cult. Here the main protagonist is already pretty clued in that things are probably not right here, something that is shown to the viewer in the prologue when Brent gives a brainwashed cult member a gun and tells them to shoot themselves. This introduction by the way features a great scene in which the visuals match up to the music playing over the scene. Drugs play a big part here with Melanie (going under the name Mary) constantly getting drugged when she sleeps, suffering amnesia and becoming pliable to the leaders whims. However her goal was to go undercover and it never becomes crystal clear if she is actually just pretending to be getting ingrained into the group or if she actually is. With no other characters to speak to who know who she really is this aspect is always a bit misty. Near the films start she has her phone confiscated and so it is up to her sister and editor back in the city she came from to explore just what exactly is going on. The subplot of this exploration though never felt smooth, at one point it takes place just as a voice over, another part this sub plot starts with a far away shot of a city, as if to remind people these other characters actually existed. I felt if Melanie herself had discovered this it might have added to the tension a bit.

That leads me on to my other point; not a lot actually happens here. You don't need blood and guts to make an effective horror, there is none of that here, but nor is there much of a threat of danger. Aside from the last fifteen minutes or so (and take away the frequent involuntary drugging) and this cult seems pretty bland with members brainwashed for sure (for the most part), but still free to travel around to the local town. There is a constant feeling of peril throughout though, this is helped both by the soundtrack and by the pretty cool dream sequences. There are a few nicely edited scenes of people wearing sheep masks standing over Melanie, while Brent with a wolf mask on seems to lead them. This was some nice imagery and the first real sign for the main lead that something is off. 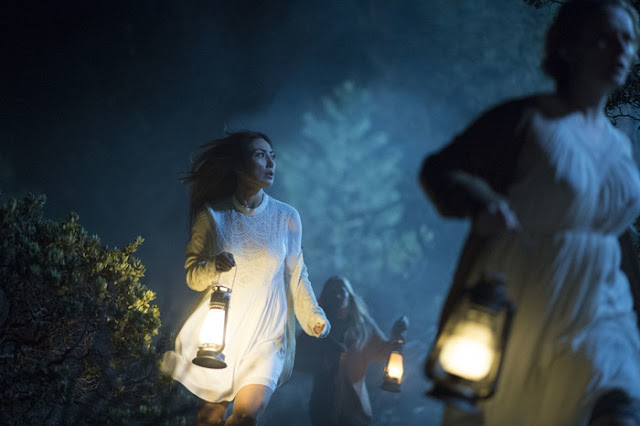 There wasn't a bad actor amongst the small cast, however there wasn't really anyone who truly shined either. I thought that Melanie came across as a bit callous seeing as she only cared about her friend going missing as it would help her write a story. I found Brent to be good as an antagonist but failed to understand his motivations, even at the end when he explains himself it didn't really sound like much of anything. The main way we discover he is a bad person is by the subplot and the facts we find out there don't really play in to his character. Seemed he couldn't live up to the reputation painted for him. In many ways this felt like a bit of a wasted opportunity to do something special, Brent didn't seem to believe the garbage he was spouting (unlike the cult leader in The Faith Community) and so that made it all about manipulation rather than actually believing in insane ideals.

One of Us didn't bore me, and it is of a higher quality than I expected. I loved the dream sequence parts, and some of the camera work, especially with the slow motion charge at the films finale, however as a horror it never went far enough to make me ever worry for the fate of the main characters. Not a shining example of a horror being as it is pretty vanilla throughout, but at least it looks pretty. One of Us was released on DVD last December thanks to the great people at Monarch Home Entertainment.

Posted by Daniel Simmonds at 07:29