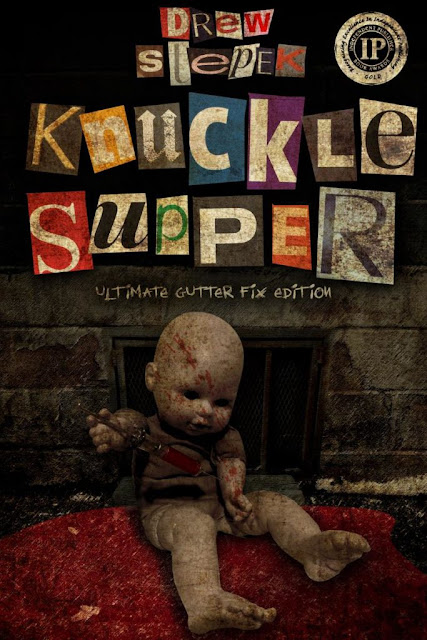 Author Drew Stepek released Knuckle Balled around November last year which was the follow up to his 2010 novel Knuckle Supper. He contacted me to give his new book a review, however he made the mistake of also including a copy of the first book in the series. I say mistake as I am notoriously slow at reading books and so it has taken me until today to read the first one, let alone his sequel (that I shall start reading this evening!). However it has come to my attention that I was actually provided with a newly edited version of the first book, the 'ultimate gutter fix edition' and this actually was also newly released last November. This is a vampire story with quite a difference (and one where 10% of the book's revenues goes to a charity dedicated to helping save child prostitutes).

RJ Reynolds is a heroin addict who also happens to be the leader of a gang of vampires known as The Knucklers. One day he takes the fateful decision to take pity on a child prostitute named Bait who ends up a prisoner at his hideout, rather than kill her he decides to take her under his care. This causes friction between him and his second in command; a young arrogant vampire named Dez who thinks there is no point keeping her alive. While this is going on The Knucklers hatch a plan to steal a large amount of heroin from another vampire gang called The Battlesnakes, one that is run by King Cobra who is the self appointed leader of all the vampires in the city. These two events begin the downward spiral of RJ...

Knuckle Supper is Tank Girl meets Twilight as directed by Rob Zombie. I loved this book it was so fresh and so captivating in the scum ridden world it portrays. Main anti-hero RJ is barely much better than anyone else, regarding humans with very little respect, foul mouthed and homophobic he exists only to get high and feed, wallowing in his own filth (sometimes literally). He lives out his life in decrepit trashy surroundings with no care for anyone. He serves as such a fantastic character though as he is a change from typical leads, he brought to mind more of someone from a Charles Bukowski or John Fante novel, an anti-hero who is given a purpose and a chance to make something of his life, but staying pretty despicable as he goes. It's telling that such a character is the main light, his journey finds himself going against cultish hypocrites, traitorous rapists and even neo-Nazi's. I struggled to understand just how someone like RJ would decide to take a human child under his wing. At first it makes no real sense as it isn't like Bait is a sweet person, she is just as corrupted and ruined as anyone else in this messed up world. However backstory of a similar thing occurring in the past kind of smoothed that out.

The vampires to be found here are different in some ways to the traditional ones. They still require blood to live, sunlight seems to be pretty fatal to them, they have super strength, and destroying the head is the only way to kill them. However they can't create new vampires, they don't suck blood, and nothing religious has any effect on them. The gangs all seem a bit unsure of just where they came from as they all seem to have amnesia regarding how they came to be. This is one heck of a violent book with people being ripped limb from limb, being fed their own body parts, and ingenious use of bodies are used as drug taking implements. The introduction is a baptism by fire with a violent dismemberment of a pimp taking place over the first few pages. The vampires have no moral compass to follow and while RJ prefers to go after junkies and low lifes he is not against butchering others when the need arises. He can be a frustrating lead as he isn't all powerful and when he most needs to be the best he often fails and gets beaten down, but this makes him more relatable I guess.

The characters were an interesting bunch and while some seemed not much more than one dimensional beings they usually ended up having more to them. King Cobra being a good example, someone who seemed to be the main antagonist but turned into someone a little different. Bait is the most innocent of the lot but even she is not set up to be that likeable, I found her really quite irritating for a lot of the book, even with the awful things that happen to her, and which happened to her in the past. Elsewhere you have the dramatic stereotypical vampire wannabe Eldritch who really comes into his own later in the story. Some characters motivations felt a bit iffy, one of the main antagonists in particular really confused me with his sudden change of heart that seemed to come out of nowhere. I was also impressed with the plot, it seemed pretty cut and dry for the first half of the book I had a decent idea of where this was going, it felt like a vampiric take on The Long Good Friday by way of Fear and Loathing, then at pretty much the exact halfway point something big happens and the main focus of the story changes track completely. Both halves were as good as each other with this horrid world being brought into such descriptive focus with Stepek's intimate descriptions of the violence and mayhem. I also loved how minor points are mentioned only to become a huge deal later on, such as the backstory for why RJ isn't King Cobra's most favourite person. It ends with threads not neatly tied up, I assume these will get explored in Knuckle Balled, I look forward to finding out.

I really suck (no pun intended) when it comes to doing book reviews, I never get across the experience of reading one, the feelings doing so conjures up, so it becomes frustrating when something as stunning as Knuckle Supper comes along. The nihilistic grimy tone sang to me, I was completely hooked into this world of drug addicts and wasters even when things get particularly unsavory such as a nasty scene of a character having performed a D.I.Y abortion on themselves, and an uncomfortable scene with a character being forced to perform a humiliating sex act. This is the type of scummy world I love to get immersed in and with Stepek's writing that is not a hard task.

A vampire book with a difference that features interesting characters and a unique feeling world. There is plenty of extreme mayhem to get your teeth into, while the plot has enough going for it that you get addicted to following the relatively simple tale to its violent conclusion. There needs to be more books like this in the world, and there needs to be more writers like Stepek.