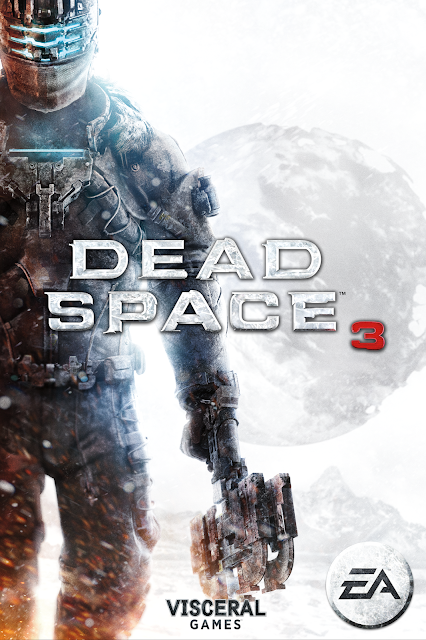 For a while I was deeply into the Dead Space series of games, the first in the series back in 2008 was a fantastic survival horror that was a master class in design and suspense. When Dead Space 2 dropped in 2011 we got another fantastic entry in the series, even if the later half was a disappointing devolution into high action, something the game had not been particularly well known for. With the DLC chapter Severed we got our first taste of what an all action Dead Space may feel like, so when a demo was released for Dead Space 3 in 2012 and it was very action orientated, coupled with poor early reviews I 'severed' my ties with the series. I thought now it was finally time to return and try out the final entry to see if it really was as bad as was made out.

Engineer Isaac Clarke has been hiding out in an apartment on a city on the moon since the events of Dead Space 2. He just wants to be left alone and is a broken man, so is none too happy when Captain Robert Norton and Sergeant John Carver of EarthGov arrive to request his help. It turns out a group of scientists led by Ellie (Isaac's ex girlfriend) have gone missing while exploring the possible location of the original marker (too complicated to go into, basically 'markers' are devices that turns people into monsters). They want Isaac to go with them on a rescue mission as he has prior knowledge of how to destroy the things, however they are interrupted by the outbreak of war. A Unitologist (a marker worshipping religious group) army led by Jacob Danik have attacked EarthGov and activated a nearby marker unleashing hell onto the city, all in an attempt to kill Isaac who is seen as an enemy of the religion. Isaac and his group escape and head to the planet Tau Volantis where Ellie's signal was last heard... 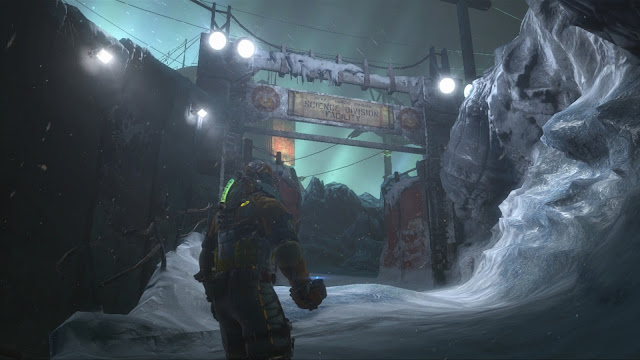 The story is deep in that if you haven't experienced the previous entries you will be extremely lost, hell, I've played those games loads of times and I was still mightily confused at points. Usually time makes games worse than they were due to the ageing process, however here I think is a rare example of a game that has actually improved, if only due to some of the more irritating design choices getting removed. Dead Space 3 was very much a product of its time. It came out when people making video games started to become convinced no one wanted to play survival horror anymore, they believed everyone wanted games that were high in action and fast paced. Due to this the weird decision to include human enemies was made with a poor facade of cover based shooting slotted in, obviously trying to appeal to the Gears of War crowd. That was the first nail in the coffin for me not buying this game when it was first released. The human enemies though only appear in around 15% of the game and controversially I kind of like them due to the dialogue they add, and the three way fights you can get into when you, the soldiers, and necromorphs all meet at the same time.

One of the most off putting things about this game at the time was that it was designed to be played in co-op, now Resident Evil 5 already showed how atrocious attempting to play with an A.I partner could be. I firmly believe survival horror games should not be made for multiple players. Thankfully playing in single player doesn't lump with A.I, instead the character of John Carver (stereotypical gruff soldier) is relegated to only appearing in cutscenes. I wish he had been removed entirely truth be told though as it was always jarring to suddenly have him appear in cutscenes then immediately disappear as it ends. By the end of the game when he is talking about what a struggle you've both had I had to roll my eyes as he had done jack squat all game. This character reduced the tension for me with the story, and the few times he appears outside of cutscenes he freaked me out so much that I would always shoot at his static character model, mistaking him for an enemy. The most hateful and arrogant part of co-op though is that there are a couple of optional missions that are locked off to single players. Apparently these added some depth to Carver, for me though he was an absolute nobody who I couldn't care less about as he added zero to the experience. There are also around five or six optional missions that give you bonus resources for completing, each one has a self contained story and set in self contained areas so I found these well worth doing (my favourite was exploring the tale of what happened to a deadly team of Elite soldiers after they refused to allow a determined Private to join them). 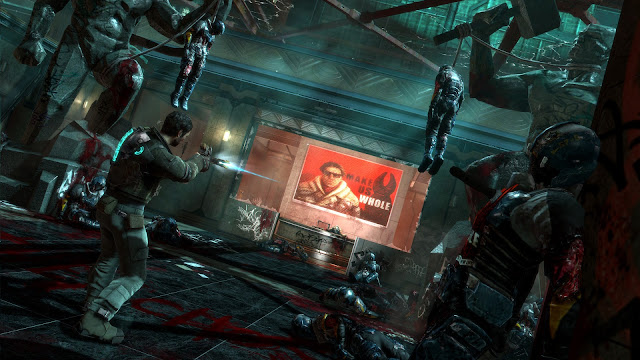 At the time you had to pay around £8 in addition to the £40 asking price for the privilege of playing co-op, a disgusting greedy decision which I'm sure contributed to the death of the series. Also I believe that at the time the little bots you can set up to gather resources for you were purposely designed to be painfully slow at their task, with microtransactions that would speed them up. In good news now the online pass has been made free (as it always should have been) and the microtransactions removed, so the bots work as fast as they always should have done.

I had heard Dead Space 3 was set on an ice planet but I was quite pleased to see that there is around five hours of game before you even set foot on Tau Volantis. As well as the prologue set on the moon city you have hours and hours of investigating space wrecks above the surface. This part of the game replicated Dead Space very well, it was so much fun exploring the wrecks and slowly piecing together the events of 200 years back. You see where the story gets great is that you are basically retracing the steps of an army that went to Tau with the same goal as you in the past. As the game moves on you get closer and closer to the exact same thing they were after, it is fascinating to discover from audio diaries and text logs just what went wrong for them. I also found the antagonist Jacob Danik to have an absolutely perfect voice actor with Simon Templeman, his voice work was stunning, and frequently hilarious (to paraphrase: "Did you know Isaac that you are extremely hard to kill? Did you know that?"). The ice planet itself is more varied than I had feared. A lot of it is set in bases created by the previous visitors and so becomes more classic Dead Space in feel. It makes sense to have an ice planet when you think about it as one of the series biggest inspirations was the horror movie The Thing. Poor visibility makes even huge open areas a tense place to explore at times. By the games end you get to go to some epic locations, I would whisper that the final area in the game was actually the most atmospheric place in the entire series, splicing in elements of Tomb Raider and Uncharted with the exploration of ancient ruins discovered deep underground. 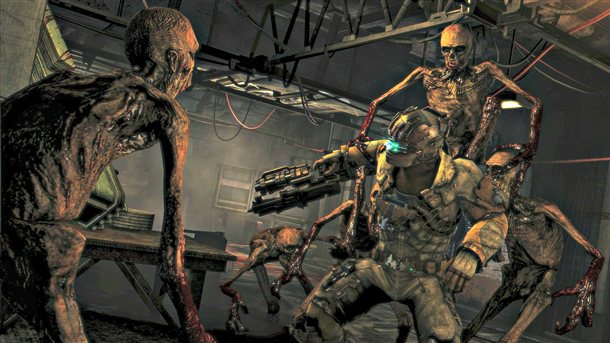 This is a high action game unfortunately and the designers never seem to know when to stop flinging enemies at you. It got to be a chore at times the sheer number of monsters you would have to fight. Long after it got boring there would still be endless waves of creatures pouring out of vents. By the mid point of the game my weapons had became useless, taken dozens of shots to kill a single enemy. For this game you have to make your own weapons out of parts you find, something I wasn't that clued up on, it was only after a quick Google search that I discovered how to make some truly powerful weapons, so by the games finish I was able to kill most foes in one or two hits. The plot is very confusing and can be seen as quite silly *cough* necromoon *cough* but I loved how involved it got even if it drew parallels with both Halo 4 and the Mass Effect series. The necromorphs are mostly ones you have seen before, needless to say they can be as fun to fight as before, having to destroy their limbs. The weapons are more based around proper guns this time rather than futuristic engineering equipment. This is the biggest game in the series, I expected around 8 hours, much as the other two main entry titles were, instead I finished with a completion time of 16 hours! I never got bored though, there is a lot of variation surprisingly, though less set pieces, and less bosses. For the first half of the game there was not a single boss, then when you do finally get one it is a Nemesis (Resident Evil 3) style recurring foe that keeps popping up time and time again. I was quite happy to see the end boss was pretty awesome, he made the end boss for Dead Space look like a baby in comparison. Over the course of the game you pilot a crashing ship, abseil both up and down huge cliff faces (one entire chapter is dedicated to this), float around in zero gravity environments, and travel in many, many lifts (that go painfully slow in a failed attempt to try and disguise loading times: another product of the time). It all wraps up in a pitiful ending, for again, you see, this was released at the time when real game endings were locked away behind DLC you were expected to cough out more money for. Lucky for me I got the required DLC for a few quid and so I shall be playing that very soon.

It is easy to see why people were so angry when this game come out, but for me going to it five years later on I was happy with my time, it is nowhere near as good as the other two, but it is still a good game, one that I enjoyed playing despite the glaring faults it has, and despite the fact that poor sales of this killed off the franchise, just shows where being greedy gets you. This was a game that hated the players and payers and saw them as nothing more than cash cows, but with time, and now the game is extremely cheap (I paid £4 for this) it is hard to get too mad.