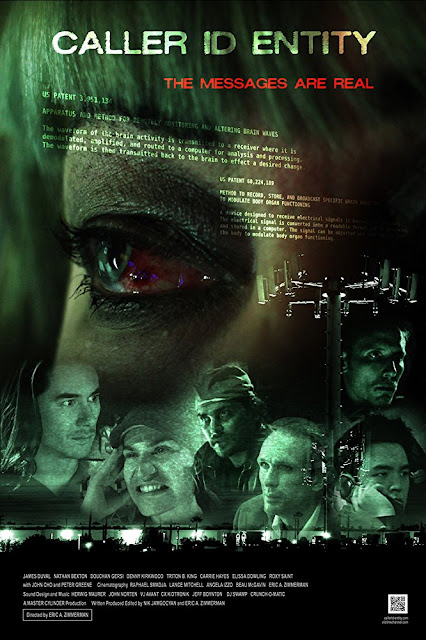 Caller ID: Entity is the first feature length film from Eric Zimmerman who is best known for his iconic music videos such as Nine Inch Nails 'Down in it' and 'Head Like a Hole'. What I found interesting about this is that the idea for this was inspired by real life phone messages received from an anonymous woman. Apparently this led to the investigation into mind control experimentation and psychological torture, it's claimed everything in this movie is based on real messages and victim testimonials.

A group of students that includes Miles (James Duval - Donnie Darko, May), Noah (Nathan Bexton), and Dale sign up for an exclusive psychology course that will guarantee them a Masters degree upon completion. The professor in charge of this instructs each of the small group on the jobs they have to perform. It appears the course is designed to find ways to monitor the brain activities of people and create a way to control the actions of the subjects chosen. Due to the questionable ethics involved many of the students drop out but find themselves with increasing paranoia that they are being monitored by electronic signals. The ones who do stay discover themselves in situations where the test subjects they are monitoring end up dead. The professor tells them if they can track down an elusive woman who has threatened to go public on her discovery of the project than these problems can be made to go away. 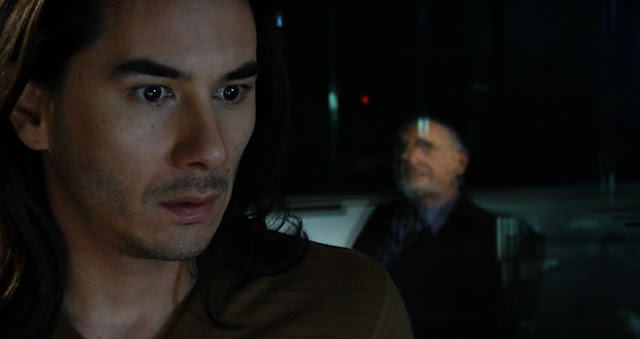 From my jumbled plot synopsis you can probably tell this was quite a confusing film, I can't say that I particularly know what was going on in it. This is down to the way it is shot as much as anything. Zimmerman has stated that he made the film in a style that "reflects the fragmentation and paranoia of having your brain hacked". In that way he is successful as this is disjointed with scenes shot out of sequence and seemingly unrelated sub plots meeting up with each other. Scenes will transition from a character doing something to someone else monitoring that character on a TV screen. Some scenes are cut in half so that you may get the second part early on, then much later in the run time you get the first half, this keeps you on your toes to work out what is really going on. I was lost a lot of the time, but also I didn't see the point of the course the students were taking. By this I mean that almost immediately it appears the students are going crazy and hallucinating (such as Noah), going psychotic, or ending up dead and so it didn't seem sustainable.

More confusion for me came from the fact that a lot of the characters look pretty similar to each other, coupled with a lot of scenes shot at night, and a tendency for characters to wear hats or masks and I often couldn't tell exactly who I was following. I ended up trying to identify characters based on facial hair they had, aside from Noah that is as he had more of a distinct look to him. The acting in general isn't terrible, all the cast are as good as each other, and it was fun to see Roxy Saint (Zombie Strippers) in a bit part. Not a single character here ever has any development to them though so it was hard to every like or dislike anyone due to them being blank slates. There is a good sense of urgency, conspiracy and paranoia mixed together here, but I was never sure what that mix was due to. There seemed a whole host of ideas about mind control that seemed to be running concurrently together. You would get a character who is forced to commit murder by electronic signals, willing test subjects getting hooked up to machines and seemingly orgasmed to death, people monitored by cameras wherever they go, and the most interesting one of a woman who appears to have become digital, like a ghost in the machine interfering in the tests and causing visual hallucinations. I felt if these subjects had been explored independently it would have been better for the cohesiveness of Caller ID: Entity. Taken on their own these subjects are all pretty cool, but as a jumble they feel a bit out of control. 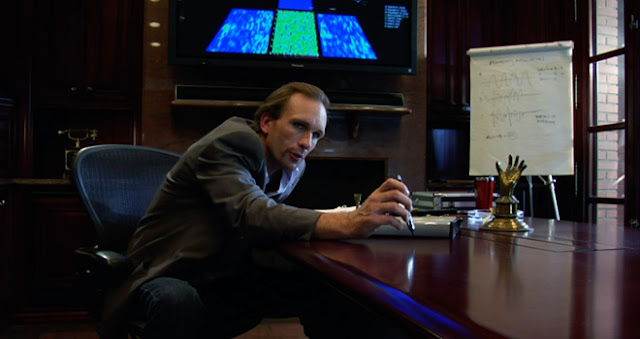 There are some good moments here, and some nice looking digital effects. I also liked the testimonials that are slotted throughout the movie, as well as the scientific text that appears on screen now and again to explain mind control processes, these add the film a little bit of realism. The fact that everything shown here is based on real accounts gives you plenty to think about, while I feel the editing and way this was shot works well. A bit of downtime to have a breather from the chaotic events would have helped. There is a lot to think about with this movie, and it does have a good flow of unease but for me it was just a little too confused. Caller ID: Entity premiered on January 10th and is due to be released sometime this year.