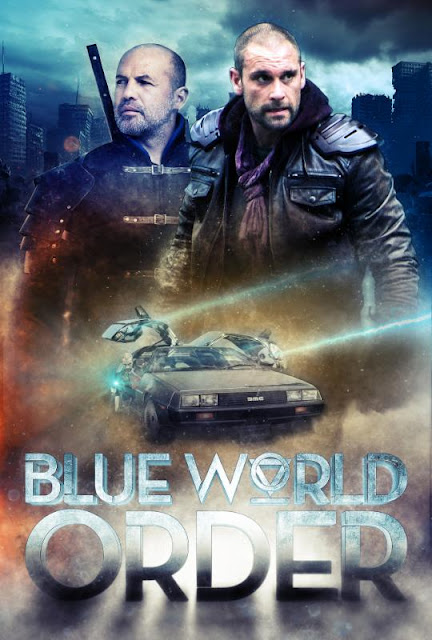 I don't often stray away from horror on this blog, yet I see the post apocalyptic genre as such a fascinating subject that I never mind covering it, especially as the destruction of the world shares a lot with my most favourite genre. So Blue World Order is of course post apocalyptic, it was directed by Dallas Land and Che Baker who were actually editor and actor respectively on Theatre of the Dead.

A devastating nuclear war wiped out the world of old with the survivors finding themselves succumbing to a strange virus. A vaccine was developed and sent out in the form of an electromagnetic pulse that 'downloaded' information to everyone the pulse touched. However this vaccine secretly installed mind control into the people it affected, not only that but it killed nearly every single child. Now a self appointed government naming itself The Order, led by Master Crane (Billy Zane - Zombie Killers: Elephant's Graveyard) rules with an iron fist. Jake Slater (Jake Ryan) had been living in the wilds for the past two years and so knew none of this. For reasons unknown he is immune to the mind control pulse effects, while his daughter Molly (Billie Rutherford) has been in a coma since the pulse occurred, and so as the film begins he arrives at a settlement seeking assistance for her condition unaware of the trouble he is going to find himself in...

Blue World Order is a very cheesy sci-fi adventure film, but this is done purposely and not in error. In many ways this reminded me of movies of this type from the 70's and 80's but brought into modern day with over use of adequate CGI rather than dodgy practical effects. These have a certain charm but it is always obvious what is real and what is not, brought to great attention during a late Mad Max style car chase across a desert in which our heroes find themselves being chased by no end of vehicles that explode in a CGI ball of flame when shot. One thing going for this movie is how much crazy stuff happens, it can be hard to keep up at times with the amount of plot twists and turns going on. There are some fun to watch fight scenes due to the way the attackers seemed more focused on dancing around than actually fighting. The fighting scenes work well due to the no nonsense approach Jake tackles his foes with most his moves being a single punch, kick or headbutt to decommission his enemy. John Wick is a beautiful ballet to watch, here Jake is like a runaway steam train barrelling into everyone through force of will. I think the best fight scene was when Jake had his unconscious daughter in his arms, to all intents and purposes it really looked like he was using her prone body as a weapon!

For all the action though I don't think you actually ever see Jake kill anyone, something that felt different for what is essentially an action star. His moves knock people out, it is up to the comedy sidekick of MadCap (Stephen Hunter - The Hobbit trilogy) to do all the killing once he gets his hands on a laser gun. He has some of the weirdest moments, such as during travelling montages when his voice over is just rabbiting on about random topics constantly. When it comes to violence there isn't really much blood at all, the most violent scene was a torture one and that didn't last too long. I loved how due to the apocalypse everyone now has futuristic weaponry and is dressing stereotypically. A flashback to before the pulse showed gangs roaming the streets as if the end of the world was the call to turn into thugs. In that way it was nice to see that when the main antagonist is introduced he actually has feasible reasons for doing why he did what he did. Master Crane is the perfect role for Zane, he brings so much joy to what could be someone pretty bland. Surprisingly I had no real problem with any of the actors here, they all complimented each other with no one standing out as being particularly bad. 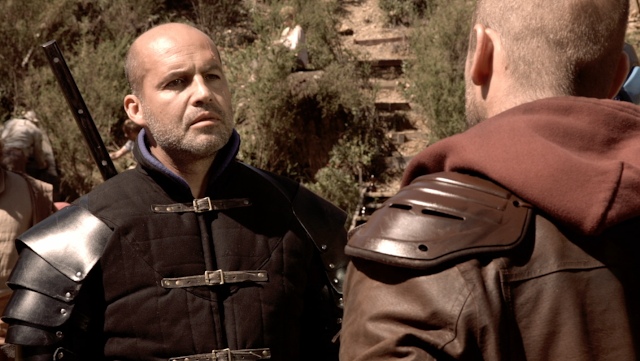 There were even elements of Black Mirror in terms of the mind control plot going on. It's a stupid idea that of downloading digital information into people's brains but it brings up a nice subject about free will and morals. The idea of a device that can be used to monitor people's thoughts really wouldn't be out of place in an episode of that harrowing show. The plot was all over the place, despite being nearly two hours long I felt like even that was not enough time to try and not only build up the idea of this strange new world, but have a grand adventure take place in it and then a neat resolution. I did enjoy the story overall if you get over the pure absurdity of some of it (such as Jake constantly bumping into people he knew before Armageddon happened), I liked the antagonists lofty but misguided goals and I liked the bizarre end that couldn't quite display the scope it was going for.

Blue World Order is a bit of a mess of a film, but it is one that brought back a lot of nostalgia. I would say that it is perhaps too long with too many characters as my attention was waning at times, and I felt some of the scene changes felt a bit abrupt. Still the fight scenes are entertaining and the dodgy CGI really did fit the pulpy tone right, and there is no end of crazy action. Blue World Order came out on January 16th on cable and digital VOD that includes iTunes and Amazon Instant Video, there is also a DVD to follow.

Posted by Daniel Simmonds at 07:25