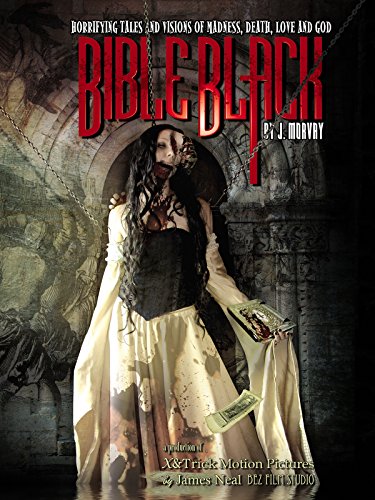 I first mentioned horror show Bible Black back in October last year (here) and have now had the opportunity to watch the first episode of this new anthology series. This was created in the tradition of Amazing Stories and Twilight Zone but has been done in quite the unique way. Rather than be live action this is actually like a graphic novel come to life with a voice over narration as the camera sweeps around pages of a book with mild paper craft style animation.

Over twenty two minutes there are a huge variety of different short stories and written pieces melded together, some lasting for just a minute or so, others like the story about a lobster girl has much more screen time (that one is actually told in three parts). The stories are all very dark and deal with subjects that can't help but be controversial with some distasteful topics looked at. You have a piece about God committing suicide after giving up on mankind, you have a rape victims poor treatment at the hands of friends and family leading to her identifying with her rapist, even a piece about Jews questioning their belief in God due to the Holocaust. Others include a religious woman drowning her six children in a bathtub, and the rounding up of Jews to be sent to Auschwitz dressed up like a jovial circus advert. 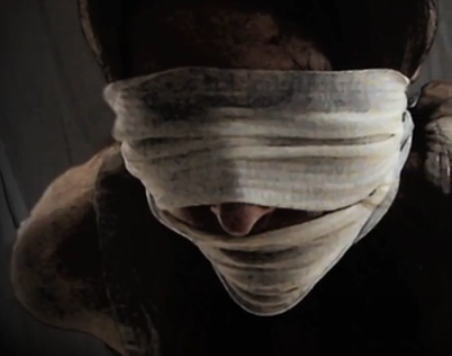 The style of these are so dramatic and over the top that it is hard to take too much offence to them, more than anything this reminded me of the TV show you could find playing on televisions in the Max Payne series of video games, Address Unknown I think it was called. The gruff deep voice of the narrator, coupled with the still graphic novel style images couldn't help but remind me of that game. For that reason I quite enjoyed this, I do love anthologies anyway and this over the top camp and unsettling tone hit a nice median with the bleak, yet well drawn artwork on show.

The way this is presented makes this stand out, I can't think of anything similar out there, as a pilot it creates the right sense of where this show will go. My only concern really is that by grabbing at the low hanging fruit that is murder, rape, religion and Nazis I wonder how much variety there can be in future episodes; if it will keep following the same topics until there's nothing else to explore, or if it will find new and exciting avenues to explore. Episode One of Bible Black is now available to watch on Amazon Video.

Posted by Daniel Simmonds at 03:30