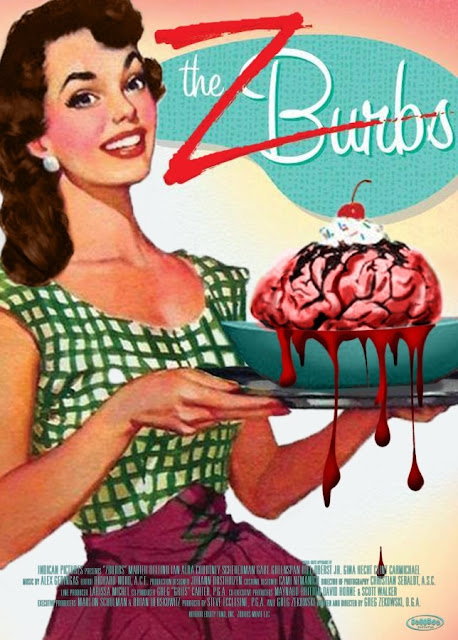 It has been a fair while since I last watched a zombie film so it was cool to see a screener for ZBurbs turn up in my inbox. This is a romantic zombie comedy (or rom-zom-com I believe) that takes place almost exclusively in the one location and that has a very light hearted look at the undead that borders on the absurdist.

One night Shelly (Marieh Delfino from The Invitation) hears a noise in her back garden so she sends her husband Bill (Ian Alda) to investigate. After a while he still hasn't returned so he heads downstairs to discover an ill looking intruder standing over her husbands body. This man attacks her but before he can do any harm Bill pulls out his brain and eats it, this makes Shelly pass out. Waking up the next day she discovers Bill now has an insatiable taste for meat and has a huge bite mark on his shoulder, aside from that though he appears perfectly normal. Realising he ate the intruder Shelly contacts her best friend Carrie (Courtney Scheurman) and together they try and work out just what to do with this turn of events... The biggest problem I had with ZBurbs is that I simply didn't find any of the jokes funny at all, not a single one made me laugh or even crack a smile which is a huge problem when this is meant to be a comedy. The jokes weren't distasteful, they weren't poorly done, they just did not appeal to me, which I found to be a bit of a shame as I actually thought otherwise this wasn't the worst film I had ever seen. Despite having such a light hearted atmosphere to this there was also a bit of a body count with at least a couple of victims to friendly good zombie Bill being completely innocent, yet this doesn't affect Shelly's conscience in the slightest. I can only imagine her mind must have snapped at some point and she is in huge denial. When the pizza delivery girl is consumed for instance it is commented that it didn't matter as she was an orphan. Elsewhere later on when one of the many government agents arriving at the house is bitten and realises they can never see their wife again a joke is made of this too which felt a bit cruel. There is a way to do dark humour but this fails by somehow being quite mean, yet portraying itself as airy and breezy. Our main leads are not good guys at all (which can be seen by many scenes of the heroes splitting up the money and belongings of victims amongst themselves) yet they are forever treated as such with the plot making good things happen to them constantly.

This is a zombie film but people coming here to expect the traditional style of undead may well be disappointed. Personally I don't mind some deviation so having zombies who pretty much act like normal humans aside from being slightly pale, having a hankering for brains and finding people's skin hot to the touch was fine. For reasons never really explained Bill and another infected character remain lucid despite other victims of the initial zombie being far more brain dead and traditional. Sadly due to what I imagine were budget constraints these more normal ghouls are mostly only referenced, they then all appear in a brief montage, but only one at a time. 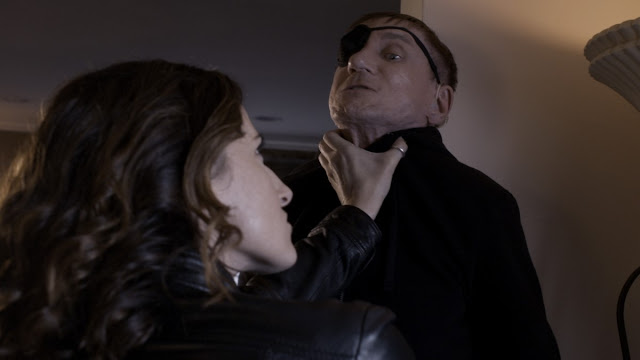 There is an element of cartoon put onto this film which comes across in sound effects, over the top lighting and the weird CGI used to simulate a kill. The good zombies kill their victims in a way that can be only described as the Tazmanian Devil's whirlwind spin, as they spin around in a cloud of dust the victims clothes fly out the storm, with the victim eaten entirely resulting in no blood or gore at all, or even a body to see. Cattle prod like devices create over the top bright blue electricity effects while reforming zombies joints and limbs crack and pop as they get back on form, zombies in attack mode move in a stilted fast forward type of motion effect that I wasn't keen on. This cartoon style effects invading the real world conjured up memories of The Mask, a film I had forgotten existed.

Romantic zombie films have been done before, notably at least in relation to this I was reminded of Zombie Honeymoon (I can't believe I haven't reviewed that on this blog!), that was far more serious than this one here. Another film I was reminded of was Awaken the Dead that seemed to follow a similar story beat in that the infected household is being monitored by some mysterious strangers. Thankfully one of these mysterious strangers is played by none other than filmatic legend Bill Oberst Jr. (Coyote, DIS), while his role is too small to make much of an impact it was still fun to see him in a part that wasn't as emotionally draining and bleak as the roles I'm used to seeing him in. I found a lot of the bit part actors were a lot more interesting and engaging than the main cast in general. With the film mostly relegated to a dull looking house (again I assume for budget reasons) it is a shame that nothing too exciting or varied happens aside from the crazy goings on of trying to work out just what is going on with Bill. There is an ill advised sex scene that cuts out halfway through (thankfully), some brief fight scenes and lots and lots of meat being eaten but whether it be down to me having vicious man flu and feeling like death itself I just couldn't make myself get engaged with any of this, it felt like a lot of nothing much in particular. 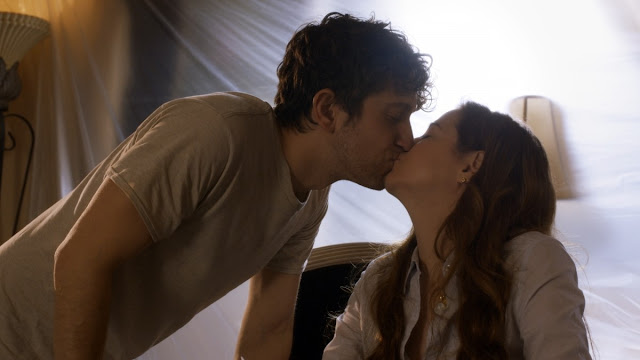 ZBurbs is an inoffensive enough film to watch, and the comedy must surely appeal to someone, however to me I just didn't get it, I appreciate the main thread line was entertaining enough but I didn't get on with any of the main cast, and I found the single location to be a pretty bland place to see out the apocalypse. ZBurbs was released on November 21st on VOD thanks to the guys at Indican Pictures.