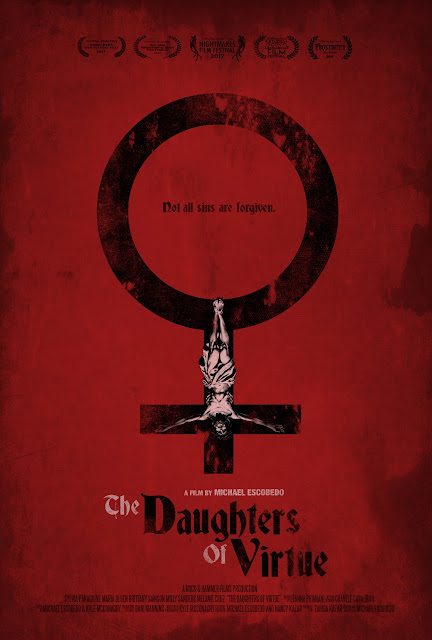 The Daughters of Virtue is an award winning short horror (Best Horror Short at the 2017 Nightmares Film Festival) that was written and directed by Michael Escobedo. This was something pretty special and is helped by having a look and sound to it that makes it feel like a lost film from the 1970's somehow transported through time and space to the modern day.

Sylvia Panacione stars as Alice; a lonely housewife who is hosting a prayer group at her house. However it begins to become clear that the group have an ulterior motive for coming to Alice's house. The leader Betty (Maria Olsen) believes Alice has not been truthful in her prayers to God and with the help of the others plans to make her confess her sins using whatever methods it takes... 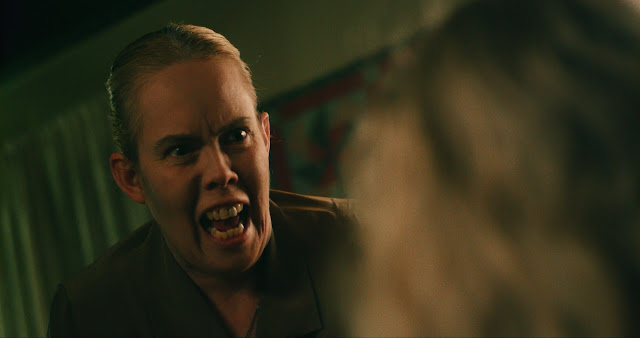 As I said in my prologue this feels like a film out of time. Especially impressive was the audio, it sounded a bit muffled, purposely of course, like inferior recording equipment was being used. The whole look of the short has a dull slightly desaturated look to it which combines so well with the beige clothes most the cast are wearing, and the beige house they are in which made it all seem old fashioned. My favourite part of The Daughters of Virtue though is the acting. There isn't a bad person amongst the small cast, but Olsen stands out as the bullying leader, with Alice's straight performance not far behind.

I never knew where the plot was going to go, from the start you get the feeling something is not quite right, the feeling of entrapment created a lot of suspense as I couldn't tell how much danger Alice actually was in. It is set up to look suspenseful and sinister but I wondered if it would be relatively more innocent than the feeling of threat and peril I was getting. The music helps a lot with this that goes in perfect tandem with the smooth concise editing and the beautiful way a lot of the shots are framed with a great blend of light and shadow. The Daughters of Virtue is just over 12 minutes long but to me I was so caught up in it that it felt like a feature length movie. I mean it was so captivating that the outside world faded away and I was totally caught up in the film, not that it in any way seemed to drag. The way this is a cohesive full story while also feeling like a scene pulled out a feature length film was pretty clever. It turns out Escobedo is actually developing a feature length of this so would be interesting to see how that turns out.

The Daughters of Virtue is a damn fine short horror that works so well thanks to a great combination of good acting and sublime film making. One of the better short horrors I have seen in quite some time.

Posted by Daniel Simmonds at 12:50