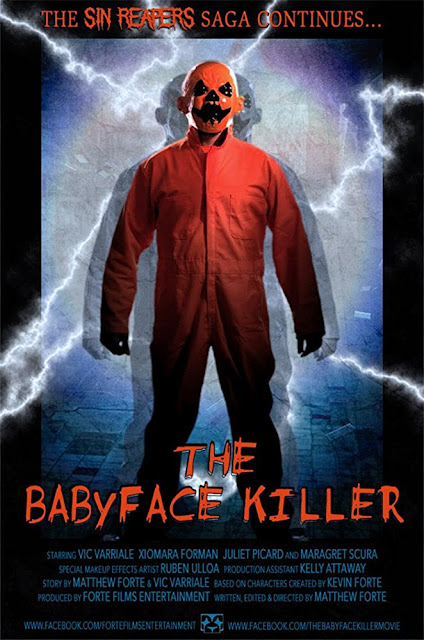 The Babyface Killer works as a stand alone short horror film, however it is actually a spinoff from Kevin Forte's horror web series The Sin Reapers and features characters created by Kevin. Like Anna that I reviewed the other day this short is directed by Matthew Forte, who also co-wrote this with Vic Varriale who stars here. While rough around the edges there is a kind of grindhouse charm to be found here.

Mark Norman (Varriale) is devastated when his partner Katherine (Xiomara Forman) suffers a miscarriage. Unable to cope with this loss something snaps in his mind and he becomes extremely aggressive around those who are expecting a child. As the weeks go on this disease in his mind causes him to become the notorious serial killer known as the 'Babyface Killer'.

So in thirteen minutes we get the creation of a monster. I liked the transition this man got and how he become what he was with a different feeling origin story. I liked how it chronicled the key points that led him down the dark path he went, the scene in the bathroom when his path crosses with an expectant father all the way up to his first victim under his new guise. I like how the Forte brothers use real world issues to inject their horror creations with, here it being the pain of a miscarriage.

The grindhouse part of this short comes from the cheap looking effects and the sometimes corny dialogue used such as when Mark goes "Why did I do that? Why did I let him live?!" after beating a guy up. It is quite over the top which I guess is fitting for a killer whose M.O seems to be pregnant women. On the special effects side of things it is all practical effects, though not the best quality as can be seen when a woman's belly is cut open and a baby pulled out of her. This doesn't even remotely look realistic, but as I said there is a kind of grindhouse charm to this poor look and goes well with the look of the serial killers get-up (a Halloween mask and boiler suit).

The Babyface Killer is well paced with some nice ideas to it but the low budget does on occasion take away from what should be more darker scenes, while throughout there is an issue with sound quality that leads to loud voices coming across as distorted and muffled. The acting is all fine enough for the story being told and as an origin story from my perspective it hit all the right beats without feeling rushed. If you're a fan of The Sin Reapers this will be a lot more enjoyable with context, but as a stand alone it works fine enough, and it is free to view on YouTube.