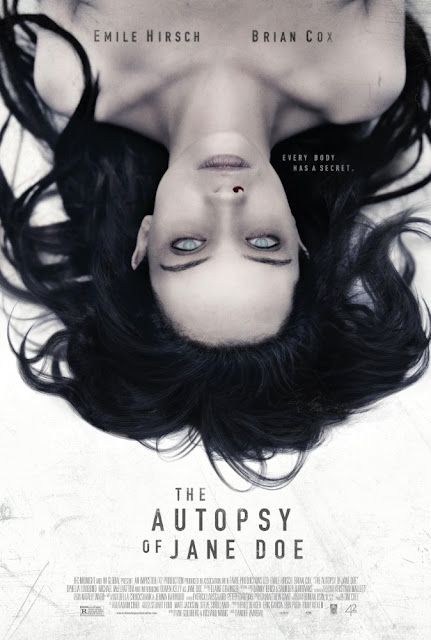 It is that time of year again when I am desperately trying to burn through the list of films I want to watch for the annual Fright Meter Awards. With The Autopsy of Jane Doe recently being added to Netflix in the UK I put it to the top of my 'to-watch' list, mainly because I was really impressed with The Corpse of Anna Fritz and thought this may be something similar.

Police investigating the crime scene of a family who were all discovered murdered in mysterious circumstances are shocked to discover in the basement the half buried corpse of a beautiful young woman (Olwen Kelly). This body is taken to the local morgue that is run by Tommy (Brian Cox) and his son Austin (Emile Hirsch), they are told the autopsy of the woman is needed by morning so that the police will have a complete story to tell to the press. The two start the examination, but through the night the more they proceed the more strange and illogical things they discover about the corpse, and too late begin to realise that they may have stumbled upon something truly terrifying... 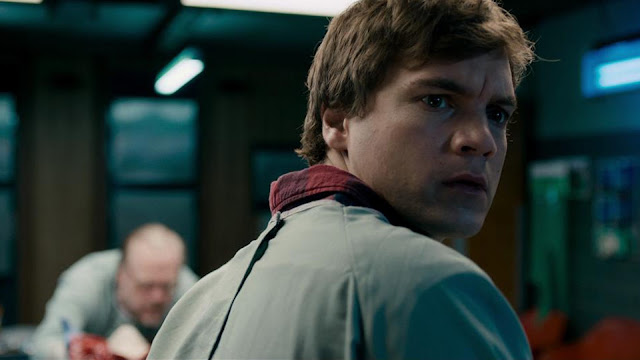 The mystery of the corpse is what kept me glued to the screen watching this, I loved how the body was like a puzzle box in that the more the two cut it apart and examine its parts the more mystery they uncover. It starts off simply enough with the fact that the corpse is not a fresh one, yet there is no rigor mortis present. It deepens with the discovery of the severe damage done to the internal organs that the outer body should have showed signs of. By the time the duo discover the inside layer of her skin has been tattooed with strange symbols the slow build up of horror really boils over. This slow drip feed of unnatural horror was fascinating to watch, helped in no end by the performance of seasoned actor Cox who gives a great performance as the middle aged mortician. It seems silly to praise the acting of Kelly as she literally lays on a slab for the majority of the film, yet there was something deeply unsettling about her look. I particularly loved that the camera kept going back to her face with a close up, each time the way her mouth was slightly open led me to think she was suddenly going to break out into a grin, she never did but that shot still was unsettling each time.

It was the supernatural aspect that nearly took this away from me though, I thought it wasn't bad including this but at some points it took away entirely from the exploration of the woman, as the hapless twosome got sidetracked in trying to escape their underground mortuary, and in hiding away from the threatening danger that they discover. It never gets to the point where this more traditional haunted action over powers the central puzzle but it nearly gets there. This becomes especially apparent with the middle part of the movie which almost exclusively deals with the escalation of this more generic horror, and it is generic, following some horror tropes that have been done nearly to death in other films, such as someone getting dragged away without warning as a door slam shuts on them. Thankfully these scenes are saved by some wonderful use of light and shadow that cover the threat in darkness making a lot of it implied rather than shown on screen, this helps scenes that did occasionally seem to be there just to fill some time. 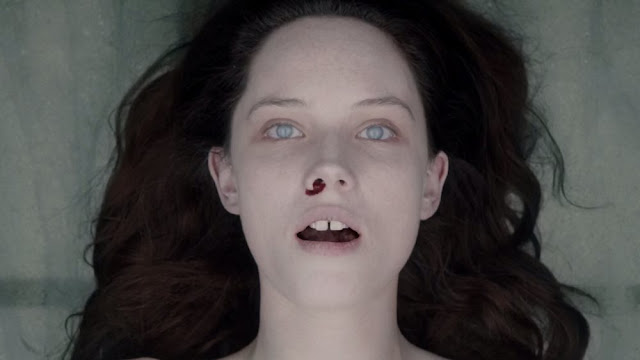 The special effects for Jane Doe herself are great, as it is an autopsy she does get cut open and it all looks great, her porcelain white skin makes for some great shots, the other effects for the other goings on are all grand as well but didn't match that particular nugget. Set design is well realised with the morgue looking very claustrophobic and oppressive, I enjoyed the huge circular mirror placed at a corner in the L shaped hallway, led to some nice moments of horror. The secret of just who Jane Doe is becomes resolved by the films end and I will say it was not something I expected, I appreciate that something ever so slightly different was gone for, rather than what I assumed the secret would be.

The Autopsy of Jane Doe is a solid horror that I really became invested in, especially the wonderful autopsy scenes. While it nearly loses itself in the middle, by films end it has gotten back on track and ends on a satisfying finale. Worth a watch for fans of horror if I do say so myself.