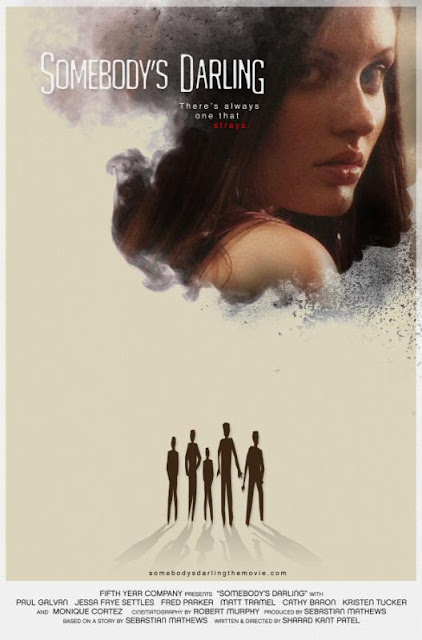 Within five minutes of starting to watch Sharad Kant Patel directed indie horror Somebody's Darling I had misjudged it badly, it felt like it was going to be mean spirited and bleak. Usual internet problems on my phone at work meant it was later the same day I watched the rest, from the comfort of my bed as I am in the throes of the dreaded man-flu. I don't know if it was delirium from my illness but there was something I found quite ethereal and hypnotic about this slow burning character piece.

Sarah (Jessa Settle) is a young coed who goes to a party at a rich fraternity house on campus. There she meets the mysterious Christian (Paul Galvan) who happens to be the President of the house. He instantly finds himself attracted to Sarah but she spurns his advances as she sees him as wanting a conquest rather than legitimately interested in her. Christian begins to get obsessed with this girl, as his obsession takes him down darker paths his brotherhood begin to get concerned about the changes happening to him... 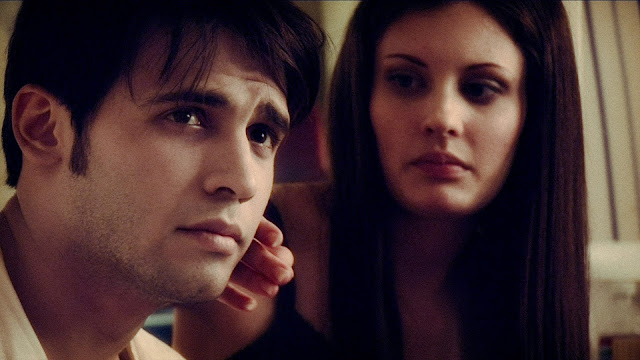 The film starts at a party and for some reason I thought the entire film was going to take place in this setting, though it does take place exclusively on the college campus. It is hard to do this contrast without making Somebody's Darling seem cheesier than it was but the parallels between this and Twilight struck me. The story beat of brooding outsider attracted to innocent girl resonates in both, though here things go down a different path, and a far less cheesy one at that. I loved how subtle the horror aspect of this movie was, the obvious fact is always shown on screen but the truth of the matter is never really revealed in too much detail until way later in the film. You have the brotherhood sleeping during the day and seeming to have a hypnotic control over people but aside from that elements are only ever really hinted at as to the truth of who they are.

The slow pace of this helped create a sense of unease in relation to Christian's obsession with Sarah who is a girl he barely knows. This obsession is explained away via flashbacks to the American Civil War during a pivotal battle that Christian seems to know a lot about, and just happens to be what Sarah is studying at college. The flashbacks  are pretty cool, but even better are the bizarre visions Christian has of sitting on a sort of throne. These visions are very stylish and stand apart from the rest of the movie due to how strangely trippy they look with him regally looking ahead, I loved how the film kept going back to this vision and how it changed as events in the film went on. The pacing in general was pretty entertaining, I liked how the horror always felt just out of shot, or how a scene would either start with horror just about to occur, or take place just after horror had occurred. This is best summed up with a scene in which some of the brotherhood are taking a girl to hospital, with no explanation of the events leading up to this moment. 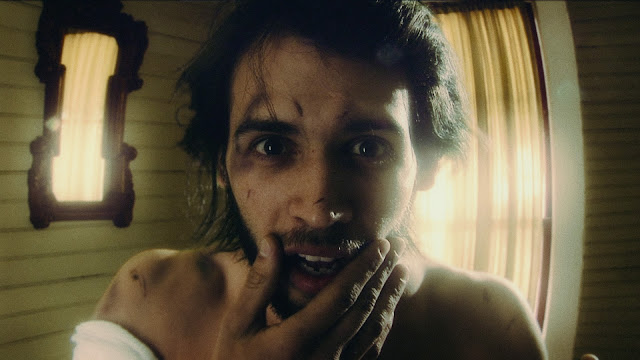 The acting isn't bad for the most part, I felt Settle was a good lead even if her character was a bit bland, while Galvan was pretty much the same. Not knowing much about the characters helped create some intrigue around them, while Sarah is the lead actress for instance we only find out she has a new boyfriend when Christian does so there is the element of the film skirting around important parts. Some of the side characters I didn't think were as good, such as the brotherhood themselves. At first, and what repelled me about them was that they acted like they were God's gift to everyone, I felt for such young people this was pretty arrogant of them, but later revelations does excuse them some of this. The parallels between on campus date rape culture and this more fantastical horror felt a bit forced at times, to begin with I thought the actual plot was going to be around rape, and in a way it is, albeit in a different type of way. It led to anxious moments such as when it appeared (to me at least) that Christian was doping Sarah's drink when she leaves the table they are at for a moment. It is easy to see the boy's antics as a reflection of this real world problem. The plot is slow burning enough that there isn't too much to it, but I was pleased to see an ending that wasn't as happy and optimistic as I feared it would be. I actually loved the way it was decided to end Somebody's Darling.

While it didn't have the most amazing start this film works out well due to the wonderful pacing and the element of restrained, out of sight horror, though for some the lack of action might be off putting, I myself liked it though. The soundtrack is pretty awesome giving elements of string instruments that conjure elements of period pieces but melds well with the almost modern day setting. Also I really liked the overall look of the film with filters used to give a slightly washed out look to the picture, it gave quite a dream like element, falls into that category of film that is perfect to put on if you want something peaceful and quiet. Somebody's Darling came out on VOD on December 1st and can be seen in a variety of places including iTunes, Amazon Instant, Google Play and Vudu.

Posted by Daniel Simmonds at 11:11