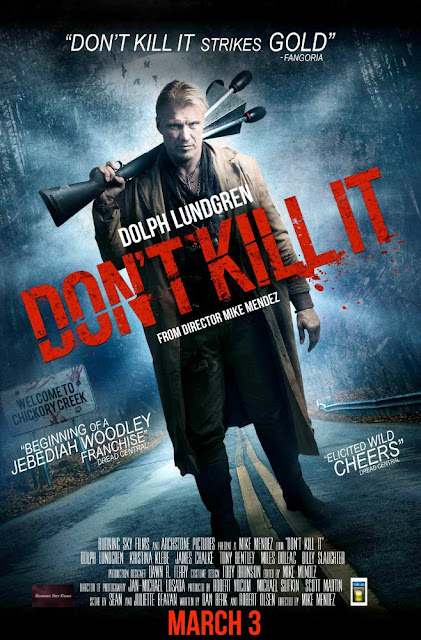 Don't Kill It (directed by Mike Mendez - Big Ass Spider!)  took me a while to get the tone of just what sort of film it was. Every single action scene to be found here is gloriously silly, but then a lot of the down time felt like it was from a different movie entirely due to how serious it was played. While it could be argued this is meant to be a straight film viewing it as a horror comedy puts it in a much better light, and myself I do think this is meant to be a horror comedy.

Dolph Lundgren (Battle of the Damned) stars as Jebediah Woodley; a demon hunter who has arrived at a small American town after a series of murders have taken place. He has been tracking a demon who has the ability to possess the person who killed its last host, making a chain reaction of new killers (the title is very apt). Jebediah teams up with the chief of police and F.B.I agent Evelyn Pierce (Kristina Klebe - Halloween) in order to find a way to stop its reign of chaos, however this proves to be quite hard with a trigger happy population... 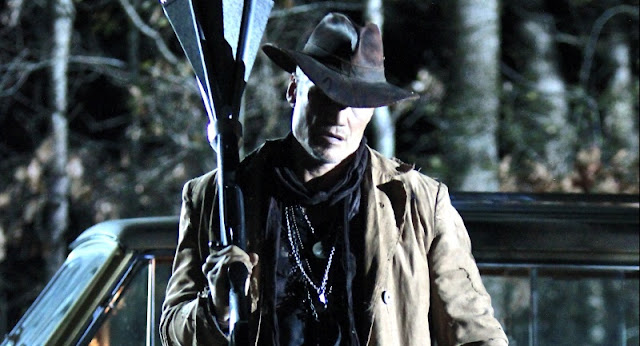 After a blistering opening (a genuine unintended pun seeing how a woman gets her face pushed into a pot of boiling water during this opener) we get into the film proper. I thought that maybe this ridiculous ultra violence would be restricted to the intro, but thankfully it becomes the norm during a couple of fantastically over the top sequences, more on that later. The story begins seriously enough, until Lundgren opens his mouth. He looks the part, but his dialogue and actions are very out of place with the majority of the rest of the cast, initially at least. Interrupting a traditional scene involving Evelyn and the police chief he arrives like a bull in a china shop, sucking the focus of the scene on to his outlandish performance. This is something that he does throughout Don't Kill It with the more normal characters getting extremely overshadowed by him. By the second half though a fair few characters of his type have appeared, notably the pastor who is all about spouting damnation.

It is the talking scenes where this loses its identity a bit, especially when it is just Jebediah and Evelyn talking it could be something from no end of similar horrors. The blossoming love between these two was also poorly implemented, thankfully it never really goes anywhere but even for a film like this it was a step too far thinking these two polar opposites would have feelings for each other. At times budget constraints can be seen, it did give the film more of a B-movie feel but having rolling mist in the woods for instance felt a bit tacky. Lundgren is the main genesis for making the film more comedic, scenes that would be poignant are made comical due to him, such as when he is convincing a man to drink poison (so that he can then kill his daughter and succumb to the poison ending the cycle) he does it in such a way that there is no emotion other than a farcical sense of weirdness. 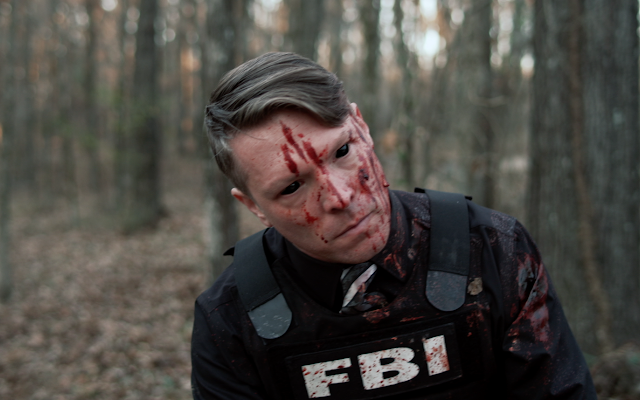 The main murder scenes are the big draw as the carnage is so outrageous, the special effects so crazy that you can't help but laugh at the spectacle you are seeing. Around the mid point there is a mass slaughter during a meeting at the town hall. Heads are popping and exploding, limbs are being hacked off, a chainsaw attack on a group of huddled people, a middle aged woman shooting a Christmas Santa, all while Jebediah is staring on with his stupid net gun (he doesn't carry any lethal weapons) trying to get a bead on exactly who in the mayhem is currently the possessed! This was so fun to watch due to the effects being pretty terrible, but in the best possible way. I really enjoyed all the deaths due to how much they are designed to be visually pleasing to the viewer rather than subtle. This again replicated later on in a few different scenes, one involving a young girl leaping around a room was another highlight.

The plot is pretty awful, I liked the notion of the antagonists ability but there is no exploration of who it really is, doesn't help that it is mute and so can only screech. I thought a few of the plot threads were also a bit stupid, the pastor for example I was convinced was on the demon's side due to a few key scenes, yet turns out he isn't at all. I also thought giving Evelyn a back story to integrate her into the main plot better wasn't great, it didn't really add much at all. The directing is fine, the editing better, especially during the scenes when the demon and Evelyn communicate, a series of fast paced visions play out that complimented the moment. 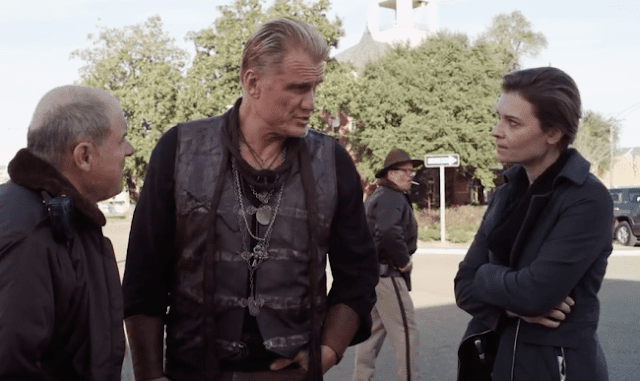 Don't Kill It isn't a fantastic film, but then I don't think it intended to be. This is saved by a tongue being firmly in cheek throughout, it knows it is silly and plays up to that, certainly with the outrageous scenes of uber violence. The plot may be bland and the characters unremarkable but this is pretty fun nonetheless.

Posted by Daniel Simmonds at 08:23