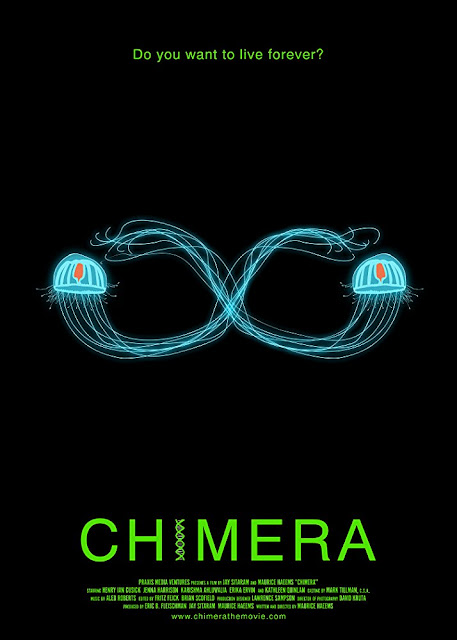 Admittedly I am not the best when it comes to following complicated stories, yet I found myself at the halfway mark of Maurice Haeems directed and written sci-fi thriller Chimera completely lost as to what was going on. There is a heck of a lot of pseudo science to be found here which would be difficult enough to follow as it is, throw in a film that is shot out of sequence and I found myself arriving at the outskirts of confusion city.

So from what I can gather Quint; a genius scientist (Henry Ian Cusick) has managed to successfully freeze his two children alive. He has done this as they share the same fatal genetic disease that killed their mother, he hopes by freezing them in time he will be able to work on a cure for their condition, a cure that will make them super human in effect by taking away the effects of aging, and natural decay. To be able to fund his research he calls on the help of morally corrupt businesswoman Masterson (Kathleen Quinlan -The Hills Have Eyes remake, Horns) who wants to use this cure for herself.

I got so muddled with the different timelines going on concurrently that it was only in the final third that I actually realised these were different times. I thought that perhaps Quint was insane and hallucinating children being at his lab. This fractured way Chimera was paced out was actually pretty cool though, it works by drip feeding you information in a roundabout way. It is hard to complain about either the look of the film, or the steller soundtrack as both were on point and combined to make some appealing scenes. The sound design was pretty clever at times, such as repeating lines of dialogue but distorted, or faded into the background.

Less leeway can go to the script though that was very stilted at times sounding like a conversation between two college students. In between all the fake (?) science mumbo jumbo you have stodgy philosophical musings about what it is to be human, this culminates in a very unnatural sounding argument between Quint and his wife Jessie (Karishma Ahluwalia) when she accuses him of having lost his soul to science or some such thing. The topic of stem cell research is brought up time and time again, in fact for the first half of the film pretty much Quints only line is "I need those stem cells" repeated to everyone who visits him. The actors themselves are all pretty great here, I especially thought Jenna Harrison as Charlie played an interesting role, while it was refreshing to see the strong silent henchman character played by a female (6'8" Erika Ervin) for a change. Even the two child actors were not bad at all, though the boy (played by Haeems own son) was off putting due to his lines seemingly being written for an adult, and so the way he spoke never failed to chill me as seemed quite unnatural for someone his age.

As to my enjoyment of Chimera, well being totally lost didn't help me think highly of this but I will say the 80 minutes passed quickly with me not once wondering how much of it was left to go. The pacing was pretty good up until the final third were a big twist occurs that is shown out on camera in logical order. I had gotten so used to jumping through time that to then have such a chunk play out chronologically felt like too much of a split, especially when what happens is all so silly and unbelievable.

I tend to avoid sci-fi in general when it comes to watching films, so I get an inkling early on this wasn't exactly tailored to me with all the po-faced science stuff. While the movie isn't to my tastes I can't fault the unity of the sound and direction, or of the acting itself. Chimera is due to start it's film festival tour in Spring of 2018 with a release due later in the year.

Posted by Daniel Simmonds at 04:58