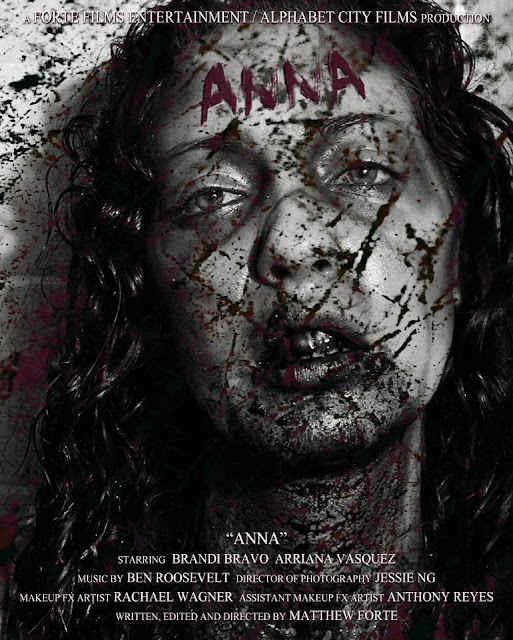 Anna is a short zombie film that clocks in at just under five minutes long. It was written and directed by Matthew Forte, who makes up one half of indie short film makers The Forte Brothers (the other member being Kevin), who also have a production company; Forte Films Entertainment. Their latest project is a horror short named The Babyface Killer (that I should be looking at in a few days, I have been a bit quiet on the blogging front due to man flu). To get myself acquainted with their work though I had a gander at Anna that uses horror as a method of exploring mental illness.

Anna (Brandi Bravo) is a bulimic who had recently committed suicide, to her horror though she doesn't stay dead long before reanimating as a flesh hungry ghoul. While she can't resist the urge to kill she discovers she has carried her illness over into the afterlife, but this time no matter what she tries there is no way out...

This is a serious film that has plenty of gruesome moments of Anna both eating the insides of people, but then purging herself and bringing it all back up. While she is a zombie she is more of a lucid one than the usual shambling corpse, she has the mind to refrigerate the organs she pulls out of her victims, and is shown not only opening doors (a big hindrance to the traditional undead) but also writing and being aware of herself. The horror comes not from the fact she is dead, more that she has the realisation there is no escape and she will be stuck with her negative though patterns for all eternity.

This is all shown with her bouncing around her small apartment which in it's plainness focuses the attention on Anna and her plight. This wasn't a bad short and it was different to the normal zombie film but I found the subject matter to personally be a bit grim and depressing for my tastes, I'm never one for too much disgusting situations. Anna is free to watch on YouTube so I will include it below, a well paced short that delivers the message it set out to do, if not to my tastes.

Posted by Daniel Simmonds at 10:29