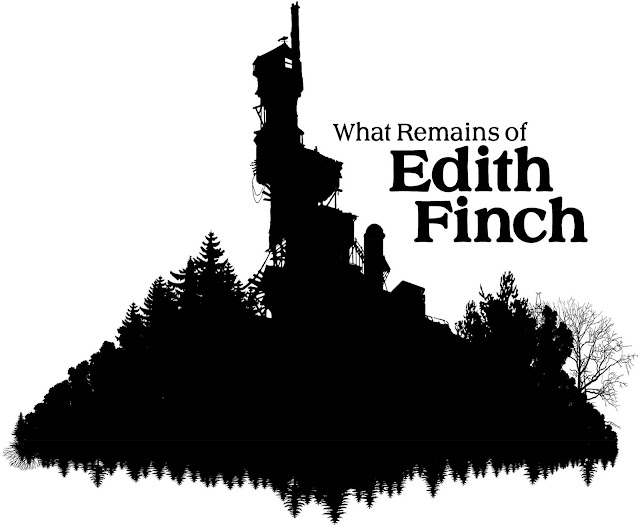 What Remains of Edith Finch is another game in the so called 'walking simulator' genre, seen previously with Everybody's Gone to the Rapture, The Vanishing of Ethan Carter and Gone Home. I've wanted to play this for a long time so seeing it in a Halloween sale I snapped it up and played through the whole game in one sitting. Sometimes quality is better than quantity and that is the way here with an experience that took me around 2 hours to see everything.

You play as Edith Finch; the last of her line who has travelled back to the creepy family home she grew up in. The Finch's are said to be cursed with none in Edith's family dying of natural causes. She has gone back to the home as when her mother passed away she left Edith a key that is hinted will reveal the secrets of her family. Whenever someone died their bedroom was sealed up as a sort of memorial, as such new additions kept being built on top of the original building. With her key Edith finally gets access to these locked away rooms, and as she works her way through the maze like house she discovers exactly what happened to each of her cursed family. 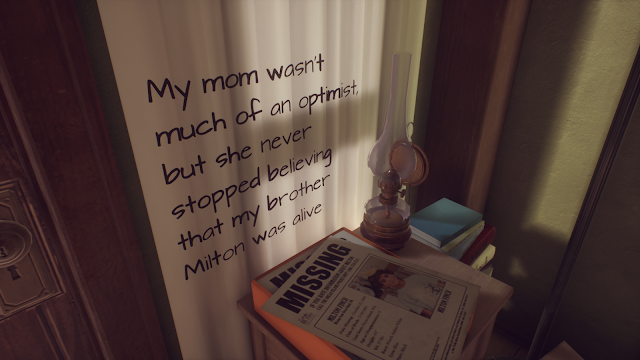 I really enjoyed my time with What Remains of Edith Finch and I loved how the game is laid out. In the present you explore the ramshackle building, but each new room you get to you are then transported back in time to play out the last moments of one of the deceased. These all take place as interactive stories and range from the farcical to the fantastical to the harrowing. There are no punches pulled in that a fair few of these have you taking the role of a child, one even has you as a baby. Knowing that death awaits at the end of each of these you can't help but feel sad and sorrowful, yet the way these play out are pretty stunning at times. A guy working in a cannery for instance escapes the tedium of his daily grind by imagining himself in a fantasy kingdom where he has gone on a great voyage. While you control his hand dealing with the fish in his present, you also control him as a 3D avatar that is exploring a world. Another standout story was set within the confines of a horror comic. A story about a fatal home invasion is shown via cell-shaded panels and with John Carpenter's Halloween theme tune playing in the background. Elsewhere a hungry girl imagines herself as various animals scouting the land for food, you hunt leads you to human prey.

Some of the stories are almost humorously short, while others are darkly playful, such as the bunker dwelling hermit who finally decides to emerge from his self appointed captivity after 50 years. All of them left a lasting impression without ever seeming like padding. It was fascinating getting little snap shots into the lives of the lost. This is all tied up with the central story of Edith, now pregnant traversing the house, with the incentive to keep playing being that a tragic event led to her and her surviving family members fleeing the house some 7 years previously, and so I wanted to know exactly what occurred. The game itself isn't really scary, it is not designed to be, more it is a bitter sweet remembrance that has some nice voice acting and great use of music. I was most impressed with the level design, at several points I was convinced I had seen everything, only to turn around and see a new pathway that had been hidden from view. It isn't all perfect, there is quite limited interactivity in the game world, and a few times I went into a new room not realising I would never be able to return to the previous one. Also as much as I like the way the story is told by text appearing in the game world it did have a habit of sometimes ripping my control away and forcing me to look in a certain direction. Then a normal pitfall of the walking simulator genre is there is a lot of reused textures, in particular the titles of the hundreds of books that fill the huge house repeat time and time again. 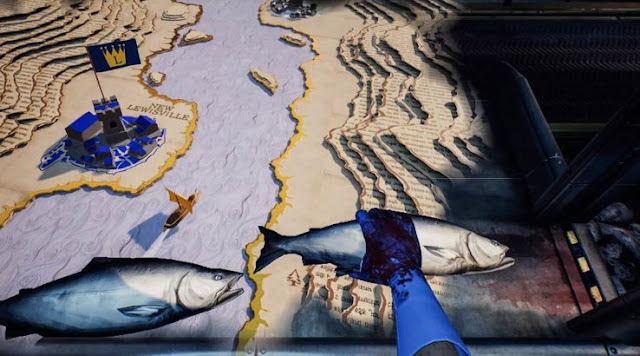 A short review for a short game but regardless What Remains of Edith Finch is a beautifully told story that shows how much can be added by giving you even just a limited amount of interactivity. The fact this is an anthology of sorts means there is never the opportunity to get bored as something new is always just around the corner. Well worth experiencing and that's for darn sure!